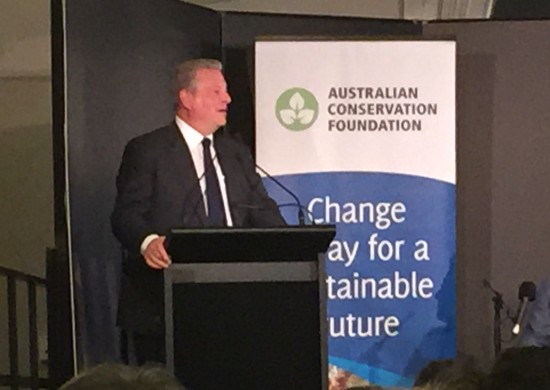 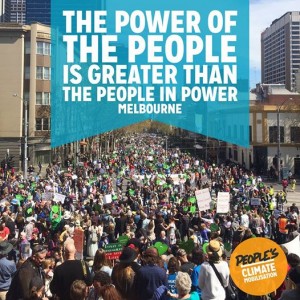 It was a great day at the Peoples Climate march yesterday, but after some more water under the bridge, I had time to put things into perspective.

As I previously mentioned, over 30,000 concerned citizens marched yesterday in Melbourne as is their democratic right.  But it got me thinking.

Where was everyone else?  In a city that has a population of 4.35 million, that is just 0.6% who attended the call to action on climate change.  It doesn’t sound like a lot when you compare it to these other events that occurred on the same day;

I am sure there were other events that I missed, but that is quite a turnout.

I realise too well that we are a free and democratic people here in Australia.  We can do whatever we like within the law during our own free time.  I am only comparing attendance at events, not judging.  Even Ben and I hope to go to the Royal Melbourne show this year as well.

However, the figures may indicate that concern about the effects of climate change is still not a mainstream issue or even on some people’s radar (yet).

So let me ask this.  What will it take to make the rest of the population show their concern if not with a climate march like yesterday?

Do we need another Angry Summer like the last few?  Do we need our reservoirs to nearly dry up again?  Do we need a repeat of the Black Saturday bushfires?

I hope not.  These events in themselves were terrible and horrible enough, but with the current climb in global greenhouse gas emissions, they are more than likely to occur again soon.

What will it take?

Archdruid John Michael Greer of the Archdruid Report observed that;

Until the people who claim to be concerned about climate change start showing a willingness to burn much less carbon, it’s unlikely that anyone else will do so, and so I think it’s a pretty safe bet that fossil fuels will continue to be extracted and burnt as long as geological and economic realities permit.

I tend to agree with him.

So whilst the Peoples Climate mobilisation was a brilliant way to raise awareness and beneficial to the wider cause, there is so much more to be done.

These things are all still in front of us if we are to bring  the climate back to within a habitable range for our children and grandchildren.

Without such changes, our continued presence on this planet is indeed uncertain, as the climate science suggests.

So what can you and I do to keep the momentum going now that hundreds of thousands throughout the globe expressed their concern yesterday?  I suggest we set an example, lead from the front, and continue to place firm pressure on the gaping wound that masquerades as our federal governments.

Some people power is good, but a lot more is a whole lot better!  Keep applying pressure where necessary. 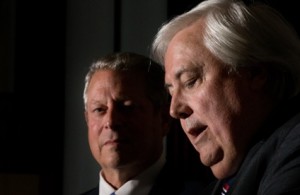 I don’t know about you but todays events in our Australian Senate took me totally by surprise.

Our climate laws are still in place, for the moment anyway.  With a vote of 37 to 35 in favour of rejecting the repeal of the climate laws, it was tight.  And, it was amazing.

What surprised me most was that Clive Palmer has done a complete about-face since meeting Al Gore.  Hence the title of the post, The Al Gore Effect.

I even watched a clip of him today actually promoting a book about renewable energy and climate change science.  It sounded like he was channelling An Inconvenient Truth!

Have I just travelled to ‘Bizarro World’ or some alternative universe, because never in my wildest dreams would I have thought that this series of event would have unfolded?

Our climate laws are safe for at least another few days until the House of Representatives amend and resubmit the laws to the Senate, so keep the pressure on people!

If you haven’t yet had the chance or time to write an email to your state’s senators, then this is your chance to shine.  Click through to the post that I wrote last week as it has a link with all the information you need to contact your Senate representative.  Ask them to keep our climate laws (which are working by the way, reducing electricity emissions by 10% during the two years they have been in force).

People power is working, and as someone famous once said;

“Decisions are made by people who turn up.”

Food for thought in our modern democracy, don’t you think?

So what are you waiting for?

If you value the future of ours and our children’s longevity on this planet, then hit those keyboards, and let our Senators know what you think.

Addendum: I have just finished sending passionate personal pleas to eight of my states Senators.  I believe that these actions count, and do make a difference.