Winter.  Time for the garden to slow down and receive respite from all the heat of our warmer months. 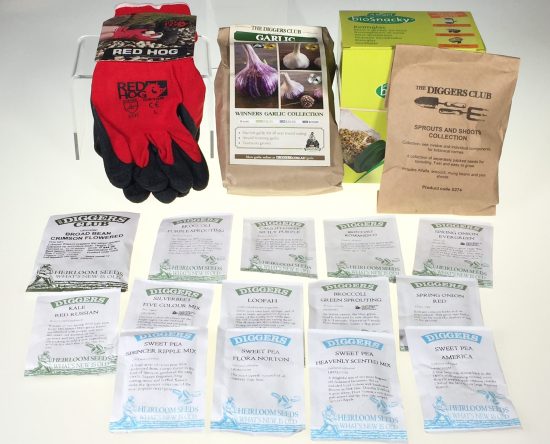 So to start off our winter crop, we travelled to Blackwood to visit The Diggers Club (St. Erth).  I’ve been a member since 2007 and it is always a pleasure to visit their shop and gardens to see what is available.  I especially like to browse their expansive seed collection and get carried away sometimes.

As you can see above, we chose quite a selection of seeds including a new pair of gloves for me, and a sprouting kit for Kim. 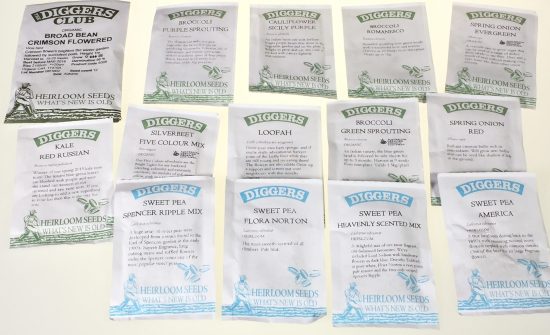 Also out of shot is a bag of six bulbs of organic garlic. 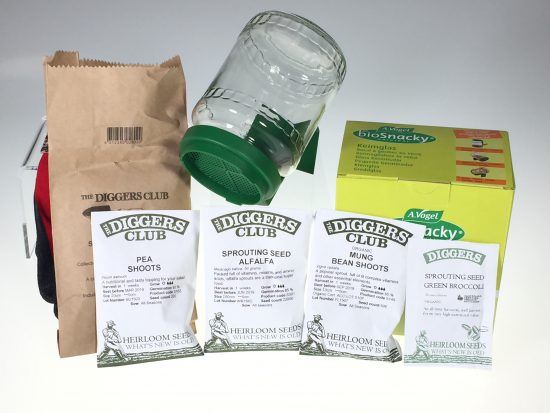 The Sprouting Kit is a fairly simple affair.  For your money you get 4 large packets of seeds and a sprouting jar that has a draining lid and stand attached.  Looks simple enough and I will write a separate post on the process of growing sprouts with lots of photos.  We haven’t been eating them because they are just so expensive at the supermarkets and greengrocers.

So this weekend is renewal time in our veggie patch.  I will spend half a day clearing out the old crops and preparing the beds, and another half day of planting.   I should manage to get everything in the ground including the garlic in the front yard.

Looking forward to sharing my winter garden with you all as it begins to become established.  However before that happens, I will be posting about what remains from the summer crop before I pull it all out on Saturday morning!

Fun times ahead.  I am starting to enjoy winter gardening much more than I used to; mainly due to the killer summer heat and reduced rainfall we’ve received over the last 6 months and the last few summers.

The climate, it is a changing. 🙁

This weekend was so much fun.  I taught my first three cheese beginners cheesemaking course.

Yes, I had taught cheesemaking courses before, but just mozzarella and not in long form.  My new course was 5 hours 30 minutes long and the students learnt how to make three basic cheeses; Paneer, Whole milk Ricotta, and Quick Mozzarella.

Kim and I set up the training kitchen with 30 minutes to spare before the class started. 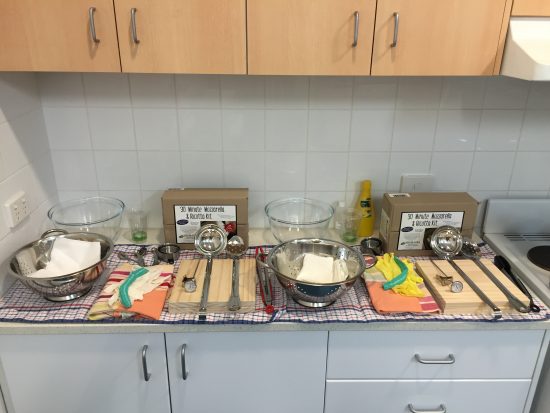 The cost per student was $130, and they received a 30 minute Mozzarella and Ricotta Kit, two wooden cheese boards, and all the cheese they made on the day.

We had great feedback from the students that it was great value for money and that they only booked on it because they learnt how to make three cheeses in a day.

So lets meet these students shall we? 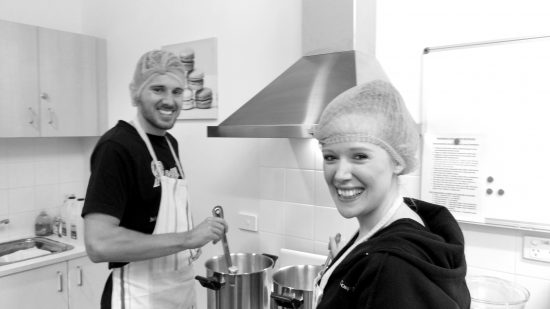 Emily and Petar were a lovely couple who were from Melbourne.  Both had a wonderful thirst for cheese knowledge and asked many pertinent questions during the day. 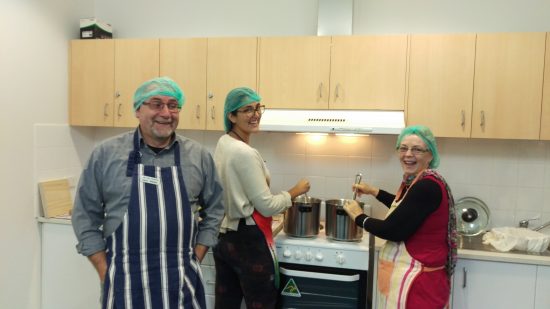 Gavin (that’s me), with Pip and Margaret.  Pip travelled from Melbourne, however Margaret travelled all the way from Biloela in Queensland!  She is one dedicated curd nerd.  Both had a great sense of humor and it made the day a pleasure.

So let’s have a look at the cheese that everyone made.

Before we touched the first drop of milk, I taught them how to sanitize their cheese making equipment and utensils and how to keep their work areas clean during the cheese making session.  They sanitized all their gear in between each session to ensure hygienic practices.

Paneer was the first cheese they made.  To make this cheese, you are required to boil the milk then add natural yoghurt and lemon juice. 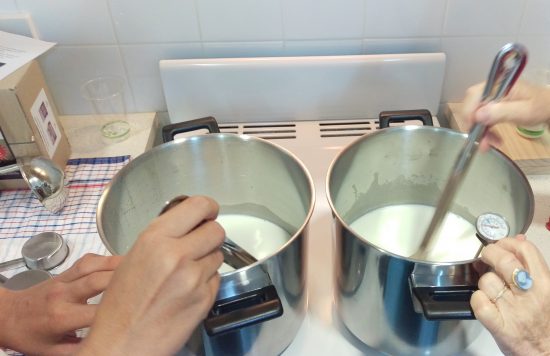 Preventing the milk from burning

Unfortunately it took a little longer than expected, because the electric stoves we had a hand in the training kitchen wouldn’t get hot enough to boil the milk!  I’ve never had this issue on a gas stove top.

It was starting to burn on the bottom, so I quickly made an executive decision and instructed them to add the extra ingredients at 90-95°C.

It’s then drained and pressed between two boards with 2kg of weight. 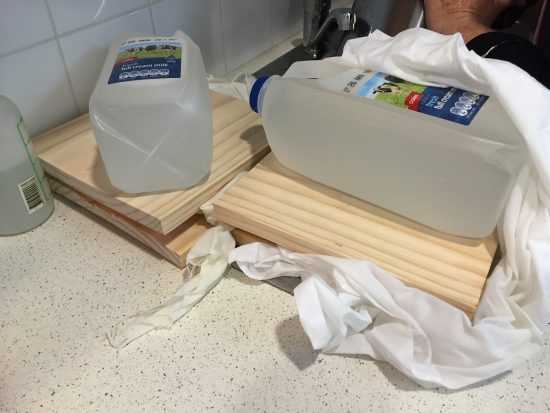 Fortunately, this worked and after 30 minutes of pressing in butter muslin, all students created their own Paneer.  I think they were going to make a curry to use it in. 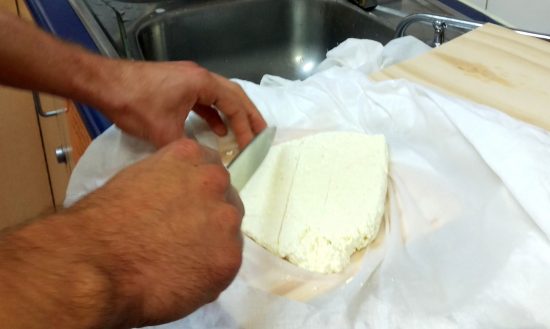 Next cheese was Ricotta, which I don’t have any photos of.  Suffice it to say that everyone’s Ricotta was successful, some making it really soft and others making it a little firmer.  I have a special recipe that allows you to vary the softness of this cheese, which all students got to take home.  There was so much of it, that each batch just fit into their 1 litre containers.

After lunch we made the final cheese, Mozzarella.  This cheese only takes about 30 minutes to make and is of the pasta filata family of cheese.

All students were successful, although Petar need a hand to form the cheese for stretching (I don’t think his milk was acidic enough).  As it was his first try, he was still happy with the result and knew how to fix it next time he makes Mozzarella. 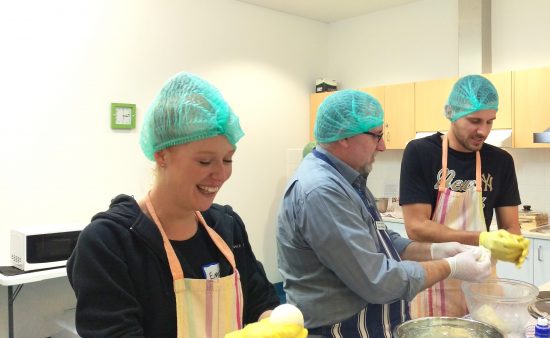 Once the curd has been stretched and formed into balls, they immersed the balls into iced water to cools down quickly so they keep their shape. 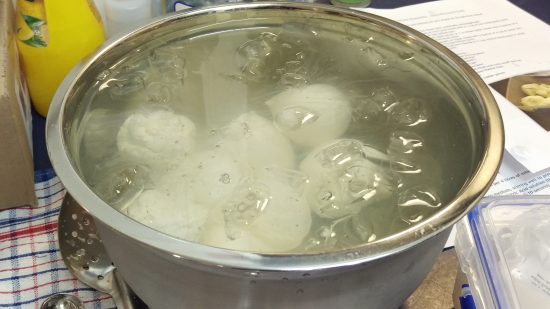 Here are some Mozzarella that Margaret made, ready to take home. 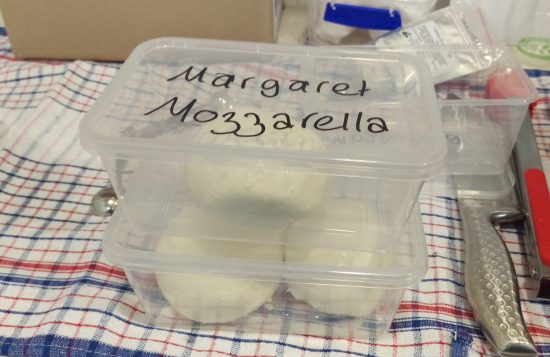 Each proud student asked me to sample their cheese, and all were as I expected; delicious.

At the end of the day’s class, the students volunteered to wash up which was unexpected, but very welcome.

I had a few cheese making items for sale at the end of the class.  Mostly books and gear that wasn’t supplied in the kit that we have for sale at Little Green Workshops. 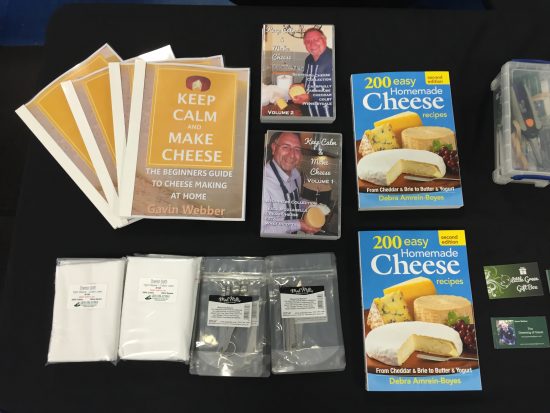 Everyone were so happy with their cheese and the course that we even had class photos! 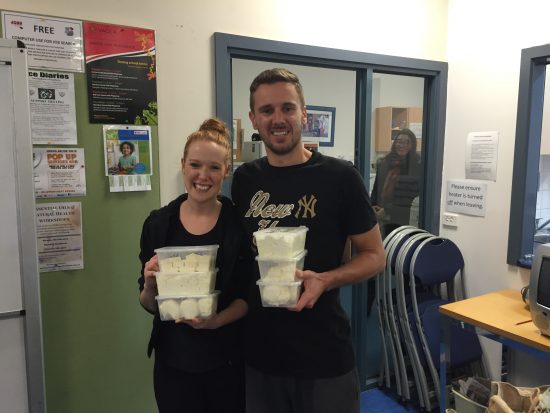 Emily and Petar with their cheese

Here is Emily and Petar with their cheese.  Emily is holding her cheese in the following order, Paneer (top), Whole milk Ricotta (middle), and Mozzarella (bottom).  That’s Pip in the background photobombing!

Before they all went their separate ways we had a class photo.  There were smiles all round. 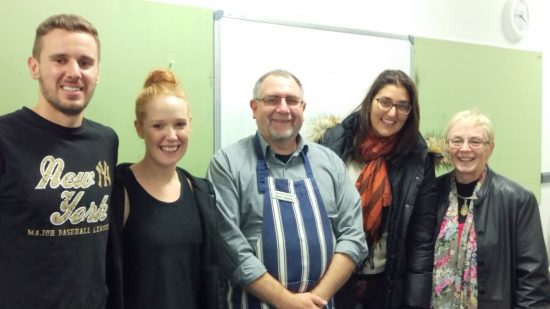 Both Kim and I had so much fun during the day.  It felt so good imparting my cheese making knowledge and at the end, I shook each person’s hand and dubbed them an official curd nerd 🙂

Anyway, so far this school term, our course has been extremely popular.  We had only planned to teach one course this quarter, however due to demand, we put on another class on 5th June, which has subsequently been booked out.

We were then asked to schedule another Beginners Cheesemaking course for 7th May, which now half full and only has two places spare.

I think we’ve hit upon a winning cheese class formula!  We were even asked by Margaret to see if we could teach an advanced cheese making class, so we are giving it some thought.  It may have to be held over two days.

So, well done to our four new curd nerds.  May there be many more cheese to come!

Is your place a house or a home?  Kim and I have some thoughts on the subject in today’s podcast episode.

Listen to the Episode Below (00:19:35)
Download Listen in a New Window iTunes Stitcher SoundCloud Leave a Review Clammr It Subscribe via RSS Subscribe on Android RSS Patreon

Welcome back. Sorry for the hiatus, but we’ve been working and launched a big project  over the last 3 months, which we’ll talk about in next week’s episode.

Today we are going to be talking about why we think our house is a home and what the difference is between the two.  And answer the question on whether being happy at home has something to do with a reduced need for getting away on holidays each year.

There may be some background noise, as we are travelling in our Honda Civic Hybrid car from Ballarat to our home in Melton. We think the conversation is fun all the same.

Until next week, have a great week of sustainable living!