Summer has arrived two months early here in Melton.  With temperatures sometimes 15°C above average over the last two weeks, I have started planting our summer crops.

Normally I plant my tomatoes in the first week of November (around Melbourne Cup Weekend), which is the old gardeners axiom here in Victoria.  Not so this year.

I have turned over a garden bed that has been sitting dormant for a year and put in my first seasons tomatoes. 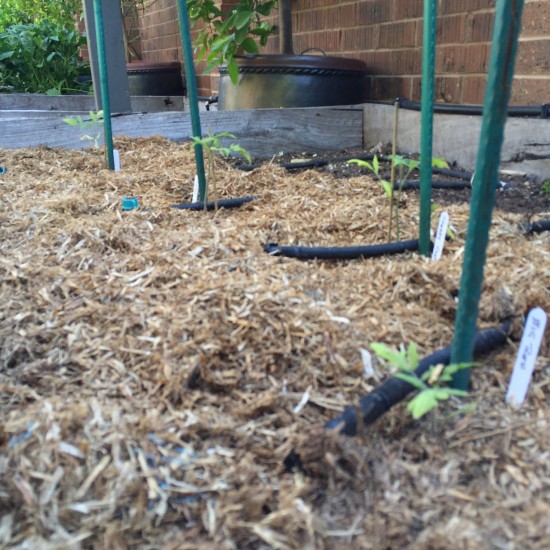 They’re small, but growing well.  Thanks to our friend Stacey for donating them out of her vast collection of seedlings!

I’ve also planted my chillies which normally don’t go in until around mid November as the ground is just not hot enough.  They have doubled in size since I planted them two weeks ago. 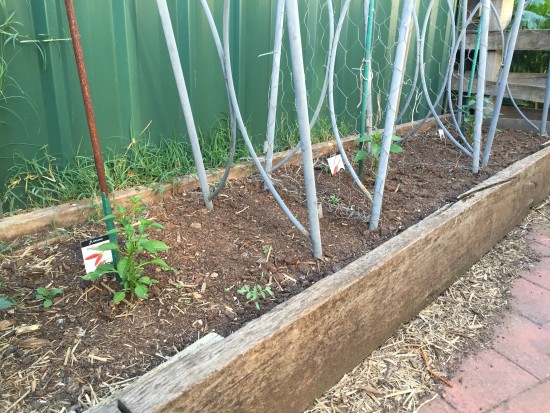 The self-seeded Basil has gone bonkers, with more plants than I’ve ever grown from last years seeds.  The soil has to be between 18-35°C before Basil germinates, and rarely do any sprout before December.

The Rainbow chard has bolted to seed, as has the perpetual spinach.  I’ve been picking off the largest leaves for the chooks to give them an iron and calcium boost, which has improved their laying output to three eggs a day from four chooks. 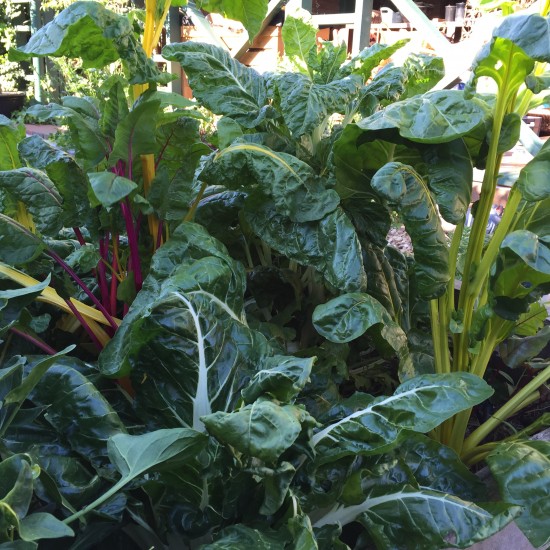 My Dwarf Beans are growing strong.  The only trouble I’m having with these is keeping the slugs away from them.  Now the first true leaves have emerged, they are a lot taller, and the slugs are having issues getting to the new leaves. 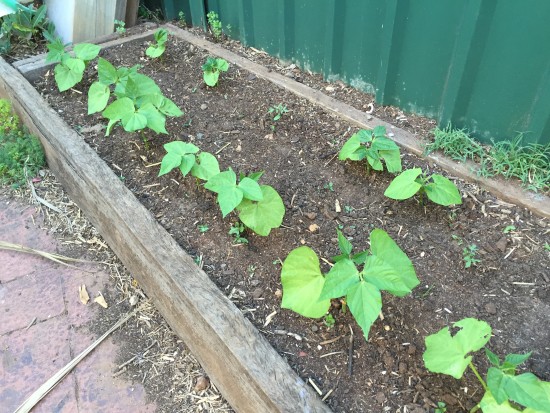 Where there are gaps in the back row, I replanted more Dwarf Beans on Sunday past.  They should start to poke their little heads through the soil by the end of the week.  The Lazy housewife beans I planted had 100% germination failure, so the seed must have been too old.  Only good enough for the next Minestrone soup.

Thankfully, Jessie from Rabid Little Hippy dropped by to collect some coconut oil for soap making, and brought her seed collection.  She had a variety of climbing bean seeds, so I took about 5 of them, mixed them up and planted them to replace the failed ones.

She also gifted me a hops bush last year for my birthday which I planted in this bed.  It is much taller this year than last, and has about 3 runners from the single plant.  I should get a lot of flowers from them this year for beer making! 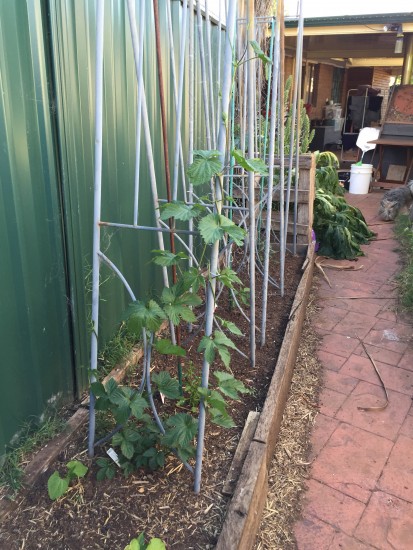 The first lot of Terrific Sweet Corn is growing strongly in between the leeks.  So far so good, and there seems to be no companion issues at the moment.  There are about 10 plants in this bed, and this weekend I will plant some more into the small wicking bed in the pool area.  They are very hungry and thirsty plants, so they will be less likely to wilt in the hot summer sun this year.  Should get a great crop. 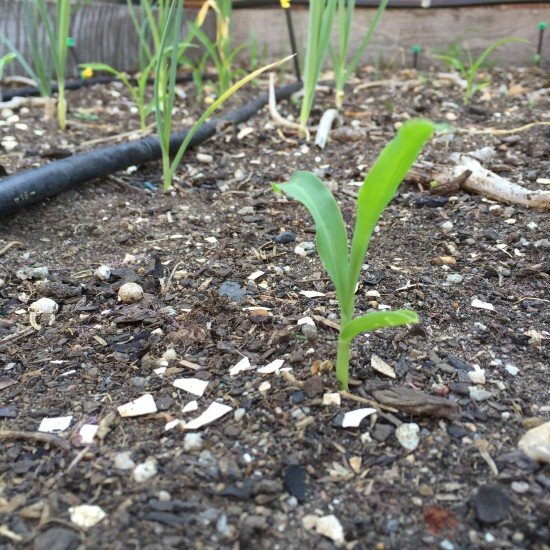 And finally, my feathered girls.  They are coping with the early heat due to their thoughtful owners forward thinking and providing them with ample shade in the form of a Mulberry tree in their run.

They’ve been getting lots of greens, snails and bugs from around the garden, and lots of fresh water.  Chooks don’t particularly like drinking warm water, so we replace it first thing in the morning and late in the afternoon so they get their fill.

It’s going to be an angry Summer when it really gets here after the solstice, so we are going to have to devise some shading methods this year for the garden beds and fruit trees.  Not sure what I am going to construct yet, but it will be something that can withstand the strong northerly winds we get here when it gets above 35°C (95°F).

We are in for a heck of a killer El Niño this season, with crop losses already on the slate.  It’s predicted to be hot, dry, with below average rainfall.  Welcome to climate change, right here, right now.  I hope they reach a global climate agreement at Paris and actually take strong action to reduce GHG emissions.  Otherwise this sort of seasons will become permanent.

Not a happy place to be.