Now I don’t normally do anything by half measures.  Guess what?  Homemade salami making has been no exception!

During my lunch break on Friday, I visited Cellar Plus near Queen Victoria Markets and purchased a couple of salami making kits plus a netting tube.  My plan was to make one years supply of salami in one weekend.

We are not massive consumers of small goods, but when I do buy some I want to know what is in it and where the meat comes from.  I want free range pork that only had one bad day.

So on Saturday morning I scoured our town for some free range pork shoulder.  I found three joints of pork shoulder, which the butcher claimed was free range.  I was happy to pay a little more, but all up I was out-of-pocket A$44 for the meat. 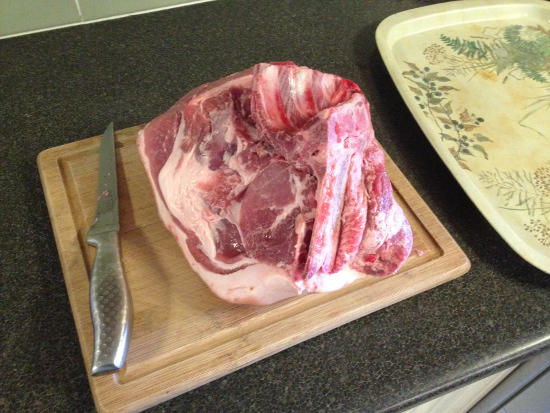 Once I saw how much meat there was in the three joints, I decided to only use one kit which made 4 kg of salami.

I then sanitized everything by washing all my utensils, trays, and mincing attachments.  I then quickly dipped everything in a weak bleach solution, then rinsed with fresh water and dried everything.  I removed all jewelry and rings and scrubbed my hands with soap and sprayed with white vinegar.  You can’t be too cautious when making salami (or cheese for that matter). 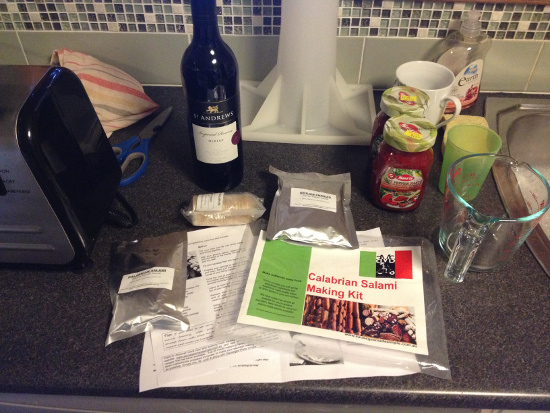 So first things first.  I had to remove the skin from the joint, separate the fat layer from the meat, then cut into 1.5 cm cubes. 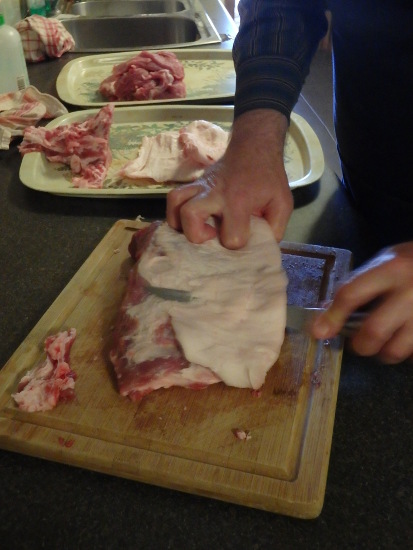 Now if you remember back to my very first post about salami making, I mentioned that I did not have a very sharp knife.  Well this time I made certain that I had the right tool for the job.  Ages ago, Kim bought me a tool sharpener that I used to sharpen my secateurs for gardening.  I remembered that it also had a knife sharpening section.  I now had a sharp knife! 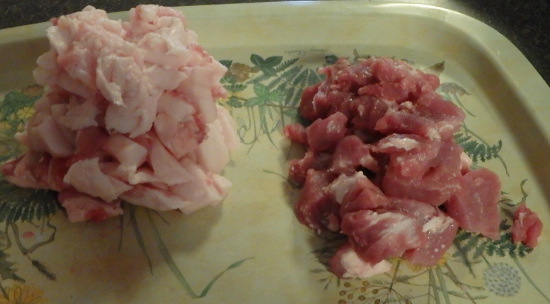 I had just enough meat in the form of three joints for the 4 kg required as I was making salami and chorizo. 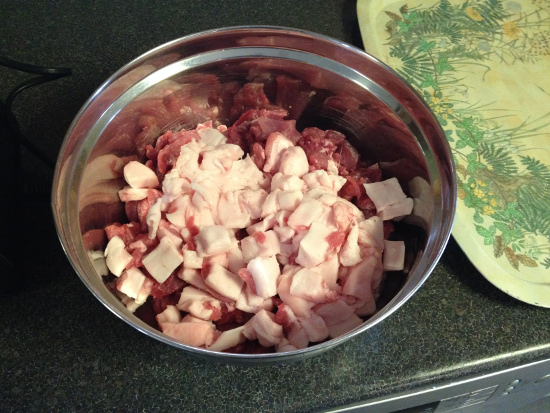 It was now time for mincing the meat/fat. 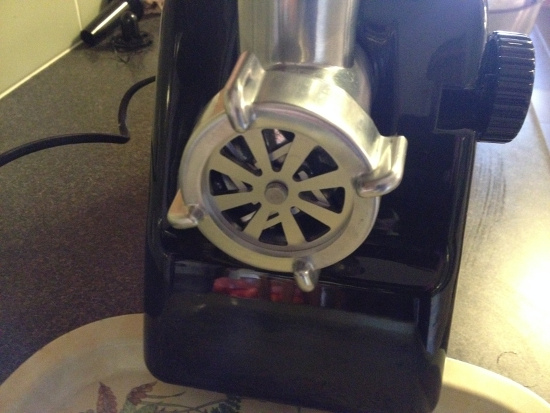 The recipe stated that I needed at least 8mm mincing attachment, so I chose the largest one I had for my machine hoping that it would suffice. 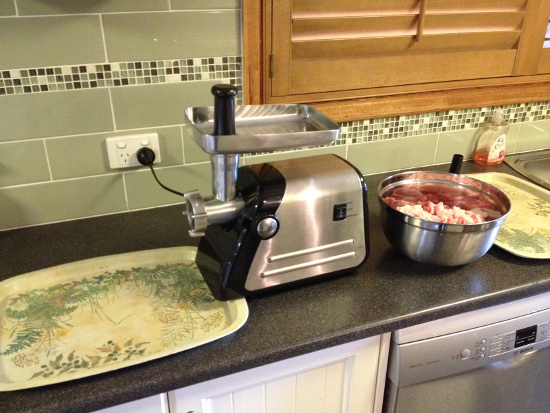 I found the mincing part of the process to be easy.  If this machine could do anything, it was mince the meat/fat into large pieces. 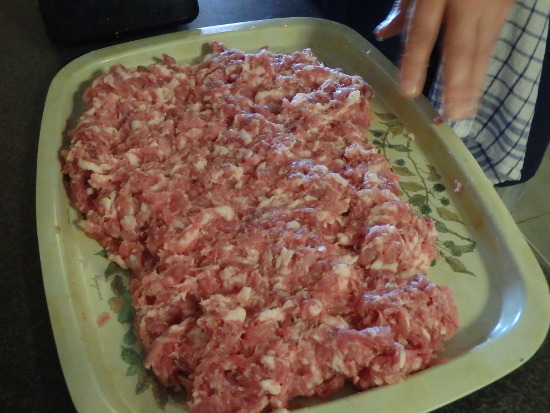 I had to knead the mince to make sure that the fat was distributed evenly before adding the other ingredients.

So with all the meat minced, I placed both 2 kg batches into the fridge to keep cool, and had a rest for an hour or so.  The meat has to be kept as cool as possible to avoid contamination by bad bacteria.

After a couple of hours, I took one batch of mince out of the fridge and added pepper paste. 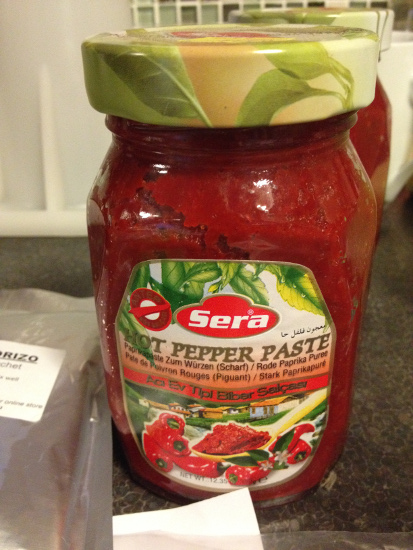 I found this at our local green grocer who also stock all sorts of european goods.  It was indeed hot when I tasted it.  I smeared two tablespoons of paste over the mince. 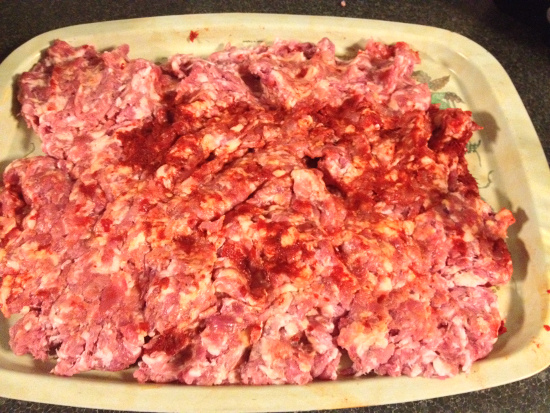 I then poured over the Calabrian Salami spice mix over the paste and meat. 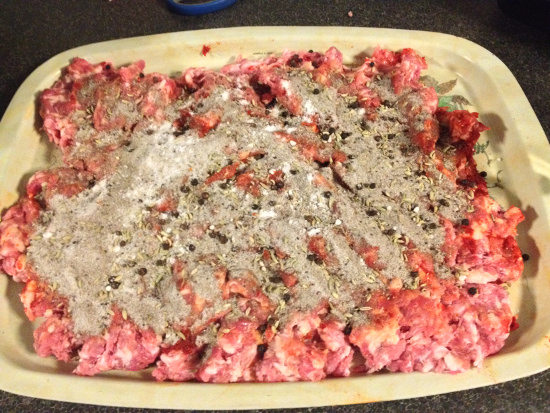 This kit contains no nitrate/nitrites, so you have to be extra careful with temperature control of the meat.  You need to keep it below 4°C at all times.  If needs be, keep putting it back in the fridge at the end of each part of the process, or make it on a cold day!

The seasoning mix had ground pepper (black and white), salt, fennel seeds, garlic powder, and pepper corns.  I mixed it thoroughly, then added 200 ml of red wine.  I had a cheeky drop of Merlot that was smooth, so as with any recipe use a good wine when cooking.  If it is rough, then don’t use it. 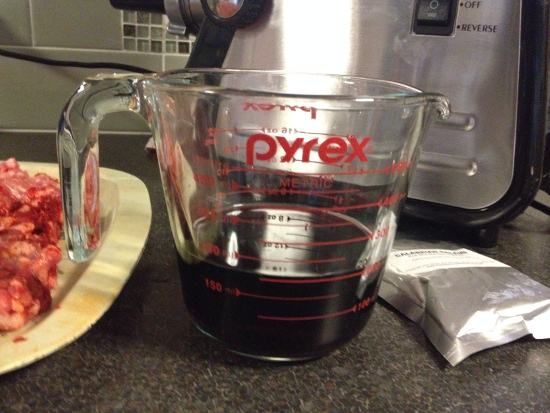 So this is what it all looked like when mixed in. 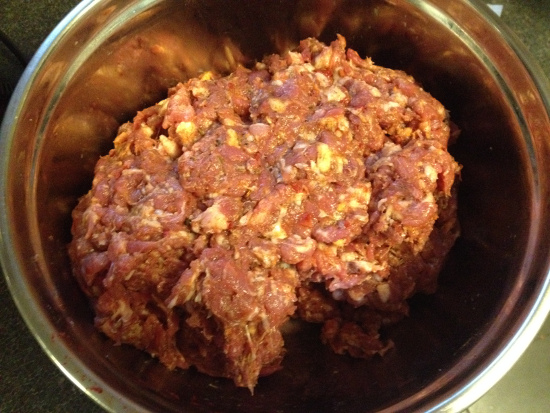 Big chunks of fat with equally big pieces of meat all mixed together with pepper paste, red wine, and spices/salt.  It would make a wicked hamburger patty at this stage.  I put the mince back into the fridge while I figured out how to use the casings and sausage filler attachment. 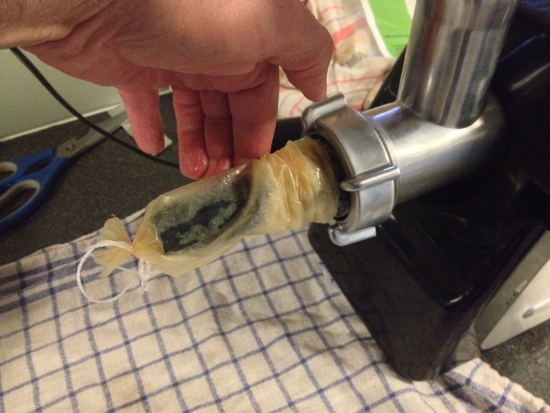 The casings get soaked in a litre of water.  Added to the water is a tablespoon of vinegar.  At the end of each length, I tied a knot and tied a loop of string.  The casing in the picture came pre-tied however there were only four of these, so I had to use the compressed casings for the second batch.

Everything was going great until this stage.  The filler kept getting blocked due to the way it fed from the top.  It used a really crappy method of keeping the filling tube centred on the screw in the machine.  It had small holes which the mince got stuck in and it minced the meat even smaller which was not desirable.  I ended up pulling the filling tube off and stuffed by hand.  It took about an hour to fill four casings.  Next year, I will be purchasing a proper sausage filler to avoid this drama. 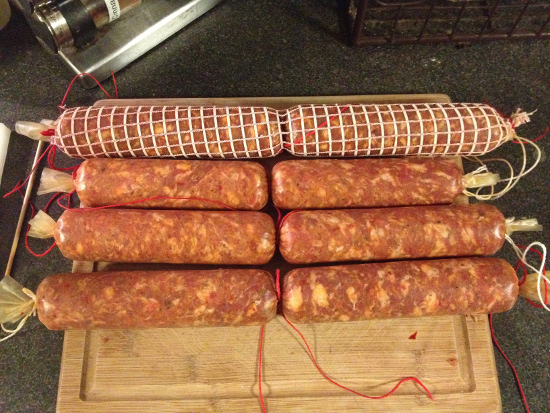 Anyway, once the casing were all filled, I tied the open end with string and pricked out any air pockets that were visible.  Because I hand-stuffed the salami, there were a few air pockets.  They were also quite flaccid, so hence the additional string around the middle to tighten them up.

The salamis were about 500 gm each, with even marbling, so I figure that I managed to do a fairly good job.  To help the salami to dry evenly, you need to net them.  It is like a big fish-net stocking that adds a bit of pressure as the salami shrinks as it dries.

I used my new netting tube to fit the netting, which would otherwise be nigh on impossible to pull over the salami. 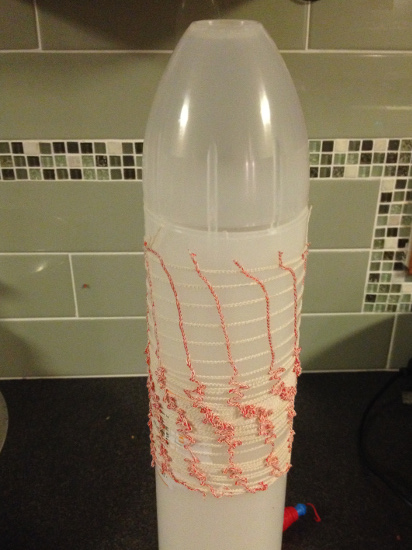 I cut the netting, which comes in a big roll, to the right length and stretched it over the tube.  You then remove the tip, and move the net up slightly and weave a piece of string into the end and tie a knot and a hanging loop in the end.  I then passed the finished salami through the bottom of the tube so that the netting starts to form over the sausage.  With a quick knot over the other end the salami is ready for resting. 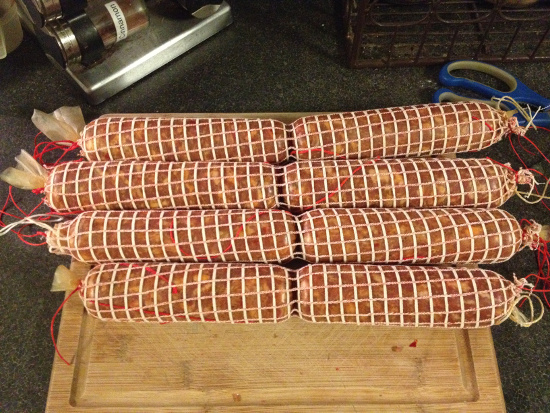 Once the salami is rested overnight at below 18°C, ideally below 16°C (with a clean tea towel over the top), it can be hung to dry.  The salami is now safe to keep at a higher temperature due to the salt and spices being present.  The salami now cures for four to five weeks depending on how moist you want the finished product.

Once I finished the first batch of meat, I still had another 2 kg of minced pork in the fridge, so I left that until Sunday to make the Sicilian Chorizo.

It was a very similar process to the first salami, however the seasoning mix had lots of chilli powder, salt, and smokey paprika.  I didn’t need to add anything else. 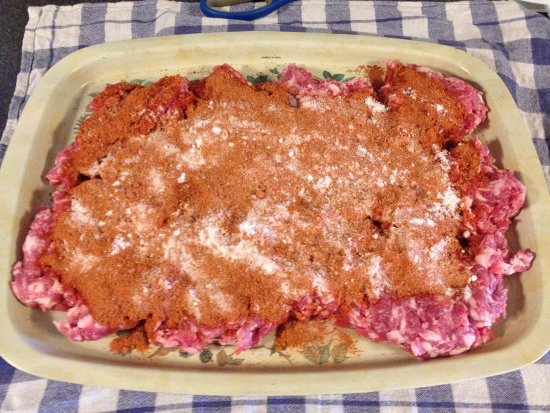 Once mixed into a sticky mess, I stuffed it into casings.  It made six large chorizo which I then tightened with a string around the middle.  It took me about 2 hours from start to finish including hand-stuffing the casings.  I did try stuffing one casing with the machine, but gave up as a bad joke. 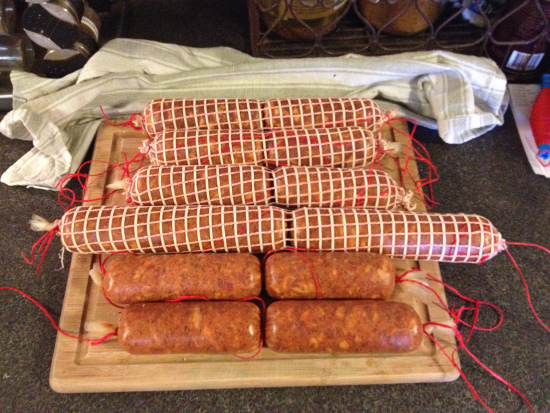 I ran out of netting, so I am hoping that the two naked chorizo dry okay.

So I bet you are wondering what my laundry looks like.  Well, Kim calls it my salami factory! 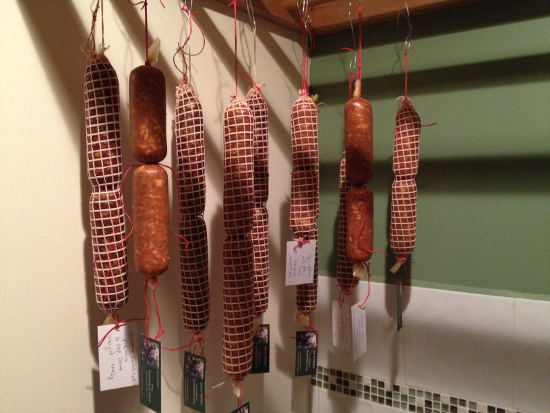 They are all tagged with the type, date, and starting weight.  They should lose about a third of their weight as they dry.

It was great fun, and glad that I only need to do it every so often.  By processing a large batch like this saves heaps of time.

Looking forward to testing my homemade salami in a month.  Should last me at least a year, don’t you think!