Well of course this weekend was no exception.  I had been neglecting the front yard until I discovered that we have a cabbage thief in the area.  It gave me the wake up call that I needed.

I spent the weekend weeding the front yard, cleaning out the chook house, top-dressing garlic and leeks, and watering.  I have even started to prep one of the veg trugs in the greenhouse for planting some tomatoes during the week.

As I was the only one out in the garden, there are no actual pictures of me working, but I did take some of my handy work. 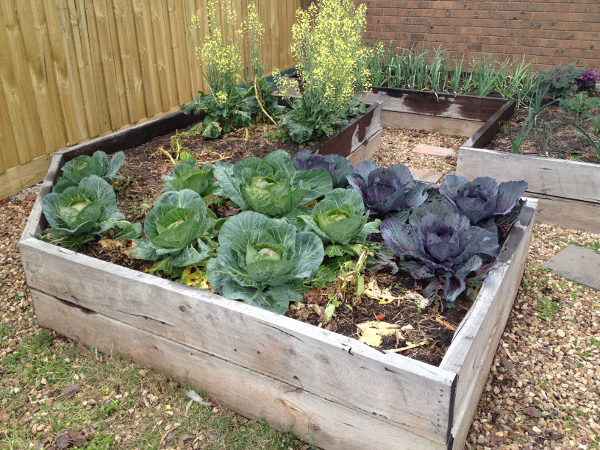 It took me about an hour or so, but I weeded around the outside of the entire veggie bed area.  Golden oxalis had taken hold however it is easy to remove quickly by hand.

There are also quite a few potatoes in this bed that have been killed off by the recent frost.  I am leaving them there until we need them.  With the stems and the few remaining leaves intact, the tubers won’t sprout for ages.

It’s all looking pretty nice.  I harvested all the remaining volunteer potatoes from this bed yesterday which I wrote about in the post titled Spuds. Why Not!  Free spuds, my friends.  Who could not love gardening when you don’t have to do anything except dig up your food?

I was also very surprised that the leeks have grown as well as they have.  I buried them very deep by drilling the holes down about 30 cm (1 ft).  There is a fair bit of white stem under the ground, so all you can see is the leaves above. 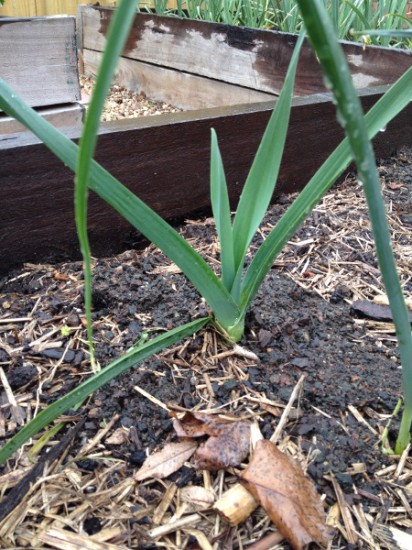 They have a while to run yet, so we should be able to cook up some of Kim’s delicious Anglesey Eggs in about another month.  I better get cracking and make some Caerphilly cheese to go in it! 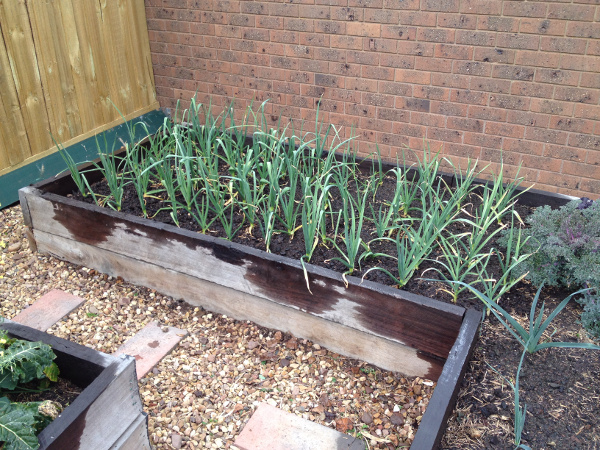 The garlic is looking magnificent.  All growing strong with not a black aphid in site.  I took a leaf out of a Gardening Australia episode I watched the other day and top dressed the garlic and the leeks with a mixture of cow and sheep manure mixed into a slurry, then place around each plant.  I then watered it in well. 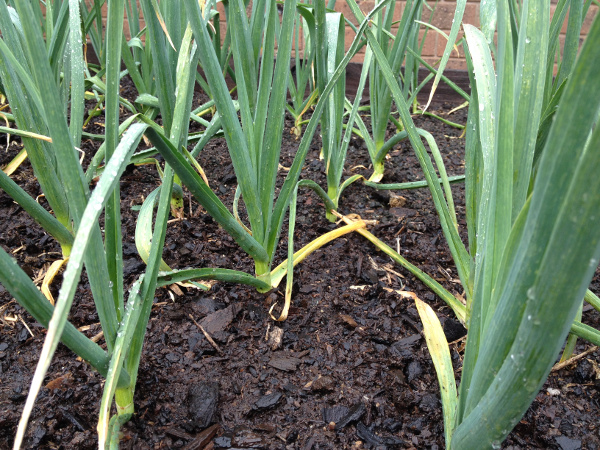 Stinky work, but if it means extra-large bulbs, then I don’t mind the smell.

As for the colourful kale, I gave them a spray of chilli and garlic spray to deter any caterpillars.  Kim harvested some yesterday and made more kale chips with liberal sprinkling of chilli powder.  Spicy or what! 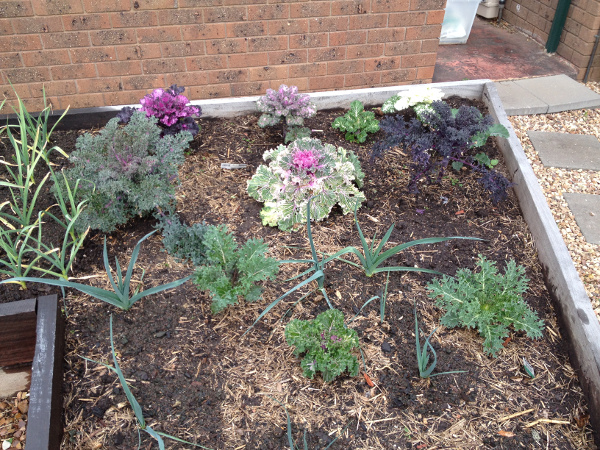 That brings me to the sprouting broccoli.  It has now officially gone to seed, which I am hoping to collect for next season.

There are still side shoots growing, so I will keep picking until it no longer sprouts.   Delicious as a snack as you weed the garden. 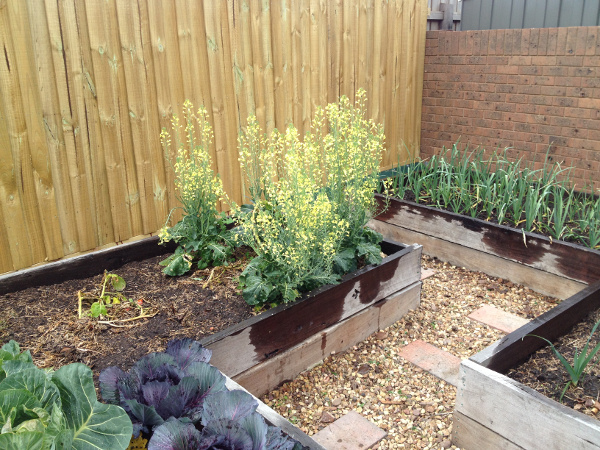 Finally, the cabbages.  You will notice the very obvious hole in the front right.  It used to be the biggest cabbage.  Alas, it did a runner.  The others should be ready to pick in a couple of weeks.  I mixed up some weed tea to feed them.  About 1 litre of weed tea to 9 litres of water in a watering can then water liberally. 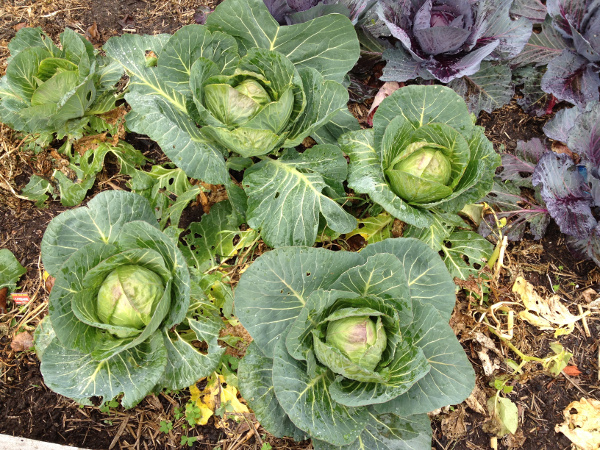 The heads are getting tighter, which is a very good sign that they are nearly ready. 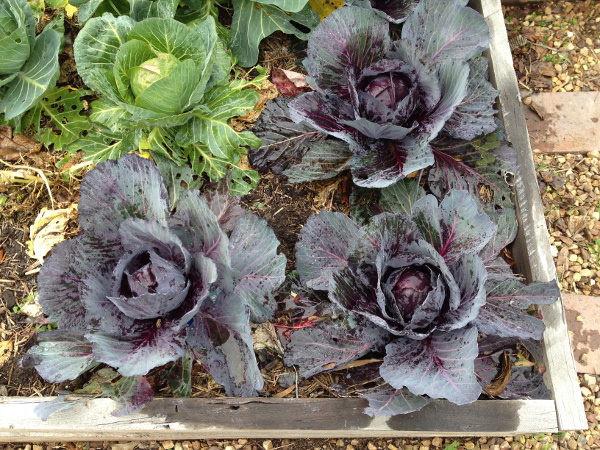 The red cabbage is a bit slower, which is usual.  Once you have had enough of the green, the red is ready to eat in coleslaw.

Well dear reader, besides cleaning out the chook house, which I am sure you didn’t want to see (or did you?), there was not much more to do.  I ran out of steam at about 3 pm this afternoon so relaxed for the rest of the day.

By the way, all the weeds went into the chicken run.  Even though the girls are not particularly fussed about golden oxalis, they do take a fancy to all the other weeds mixed in.  When I checked on them as the sun was setting, only the oxalis was left.  Without the bulbs, it turns into pretty good compost once the girls have scratched it to death.

So there you have it.  With a little bit of maintenance at the right time, your veggie patch will not only look good, but will thrive with all the special love and attention.  I think my veggies also liked the music I was playing whilst I was weeding.  Look very closely, because I think that purple cabbage in the photo is smiling at me!  Bohemian Rhapsody anyone?

Veggie patch maintenance doesn’t have to be boring now, does it?