Home grown food.  Amazing stuff, even in winter.  I have really surprised myself this winter, by pulling out all the stops and growing vegetables that I would not normally grow.  In the past this has been because I haven’t usually had the room, but since my additional 11.5 sqm of front yard garden bed, and the pool area wicking bed, I can put in so much more. 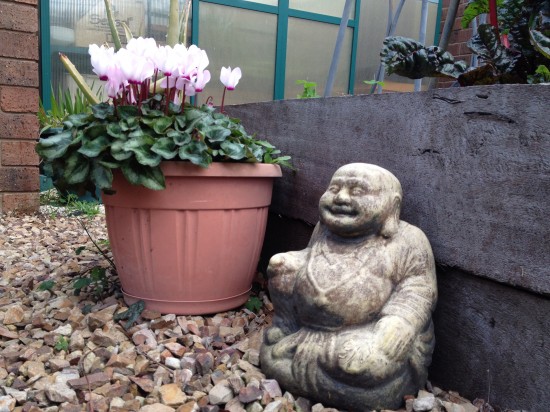 Our favourite citrus tree at the moment is the Lemonade tree.  It is still giving us fruit, and I have not picked the entire harvest.  This is because we find that for a few months at least, the fruit stays fresher on the tree, whereas it would otherwise rot if we picked it all at once. 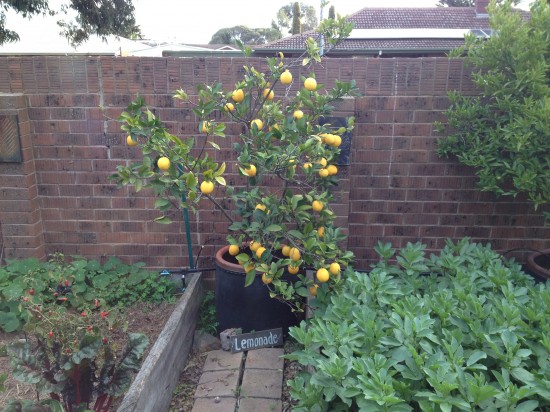 The broad beans are going gangbusters.  There is no delineation between my saved seed at the front of the bed, and the purchased seed at the rear of the bed.  Just goes to show that these two batches of seed are equal at the moment.  However time will tell when I taste the final beans. 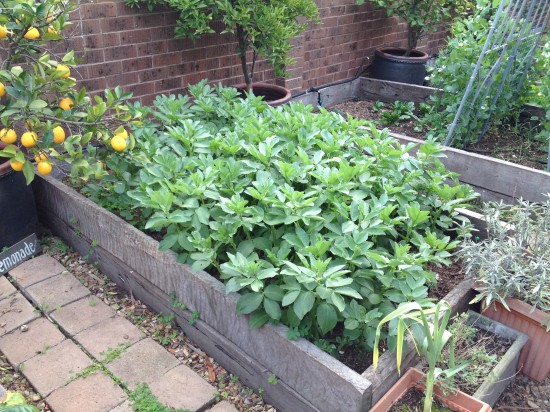 Looking a bit sparse, this bed did have carrot seedlings in it, but something dug them all up.  The English spinach is still surviving, but not thriving very well, as it looks a little worse for wear.  The three Tuscan kale seedlings were planted last weekend, and are going strong.  To the right are masses of snow peas that my Mother-in-law Pam planted before she left in early May. 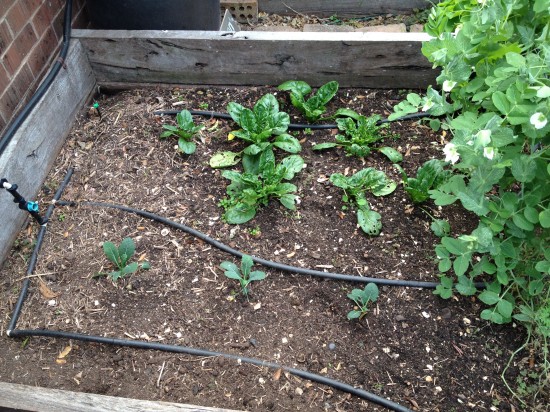 As you can see, the snow peas are thriving.  They are growing so well, and climbing up the trellis.  Getting plenty of winter rain, and a little bit of liquid worm wee every few weeks. 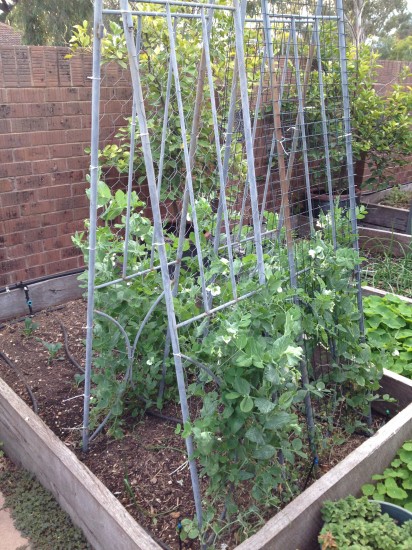 Lots of pea pods ready for the picking.  Every time I walk past, I pick a couple of pods and snack as I do the weeding.  Such a delicious morsel from the garden.  Hugs to Pam for planting them! 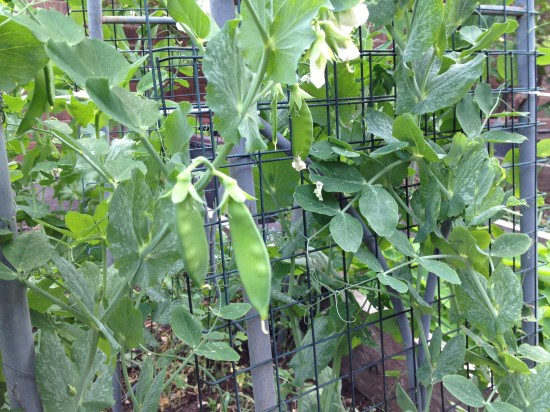 The brown onion sets that I planted in early April have come on well.  They are a lot stronger near the front of the bed, because this part received more rainfall.   As we get most of our rainfall during this time of year from the west, the brick wall blocks part of the bed, which stays dry.  I have to hand water that bit to stay moist, but obviously I am not doing as good a job as Mother Nature. 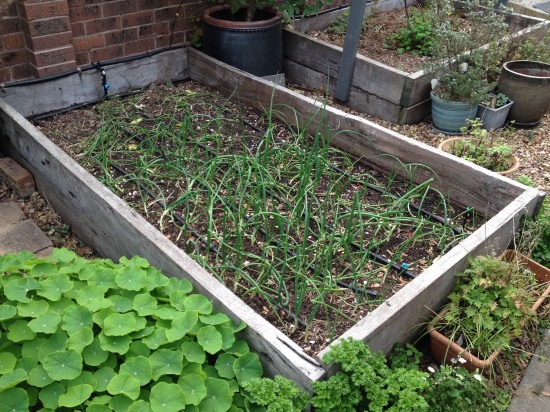 The citrus trees have masses of blossom, which is about a month earlier than normal.  We have picked about 10 Tahitian limes, which go down well in Cerveza beer, and a slice in Earl Gray Tea.

When we get a few more fruit, I will make some Lime Marmalade, which is one of my favourite conserves. 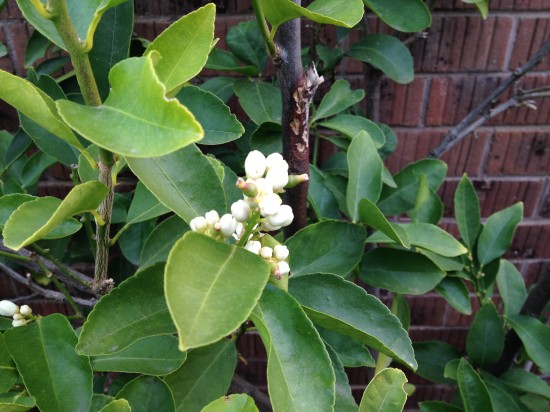 The front yard veggie beds are producing lots of veg.  Last weekend, Kim harvested so much kale and made a big bowlful of kale chips.  Delicious stuff, and thankfully I planted some additional seedlings two weeks ago.  What a wonderful vegetable. 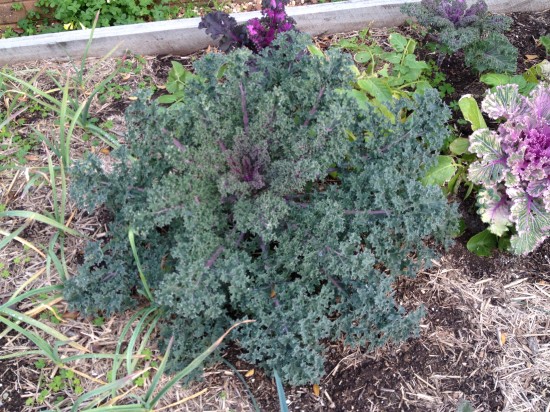 Such brilliant colours.  I love the variegated leaves. 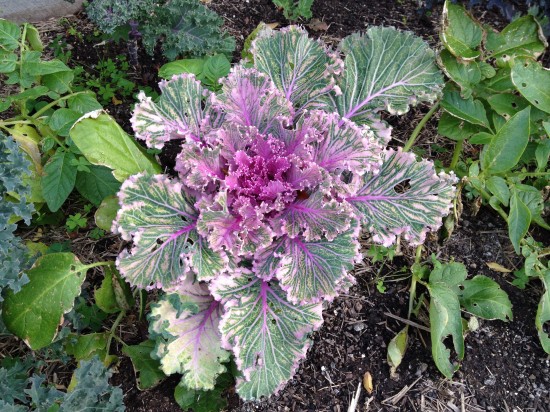 Deep crimson kale.  Who knew it would add so much colour to the winter garden? 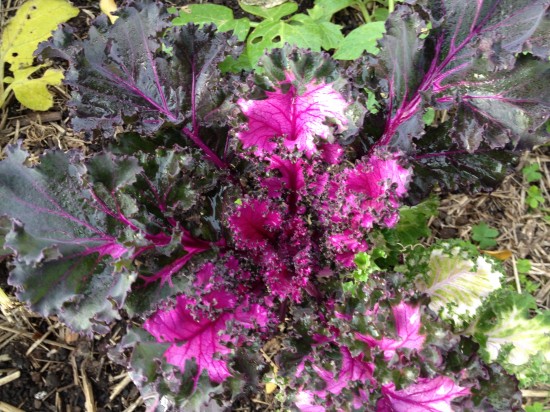 Here is the front most bed.  I have lots of cabbage in this bed, but you wouldn’t know it.  Because I had some small potatoes left over from my January harvest, that had just gone to seed, I thought I might chance it and plant spuds over winter.   If the weather had been normal this year, similar to the long-term average, they would have been killed off by frost last month.

However, because our winter has been at least two degrees above average, sometimes more, there have been no frost, and the spuds are massive.  It all looks very healthy, and is disguising the cabbages from the cabbage moths. 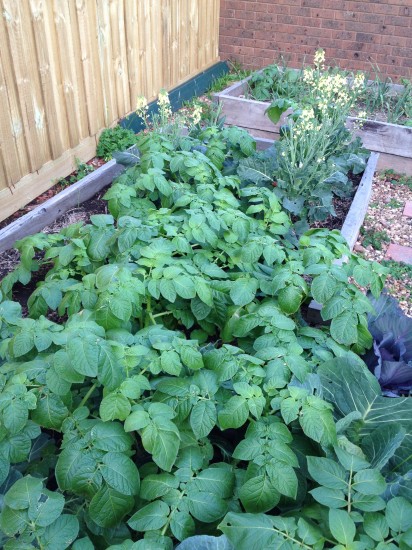 I have found a couple of caterpillars on the few purple cabbages that are visible, but they are done relatively little damage at this stage of the plants development.  The cabbage heads are forming and hardening, so it doesn’t really matter what the caterpillars do to the outer leaves. 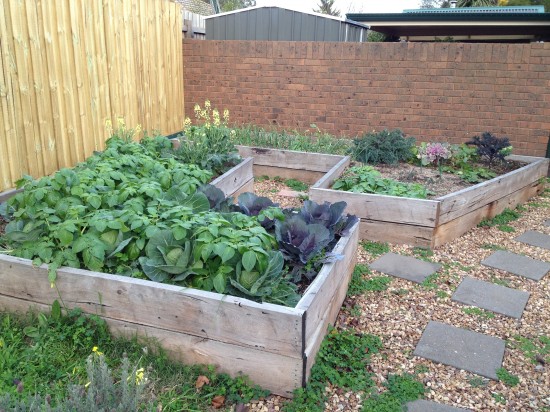 Finally, the pool area wicking bed.  The lettuce is still going strong, and hasn’t gone to seed.  The arugula is a little on the hot side now, with a distinct mustard flavour.  It is quite refreshing and adds some zing to the salad.

Not that we have been eating much salad because of the colder days.  We have mainly been cooking stews in the pressure cooker which have been both hearty and filling on cold winter nights. 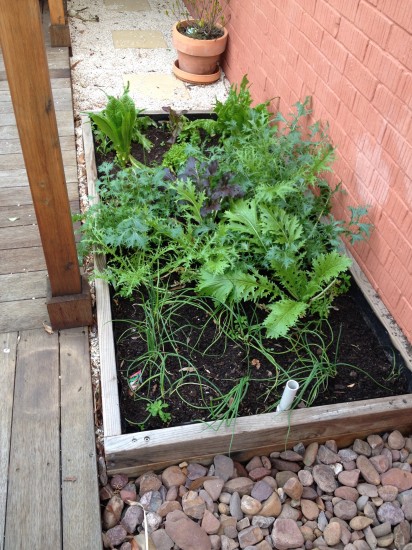 Anyway, that is what’s been growing in my garden.  What about yours?

Southern or Northern hemisphere, it doesn’t matter.  I would love to hear what is growing in your part of the world.