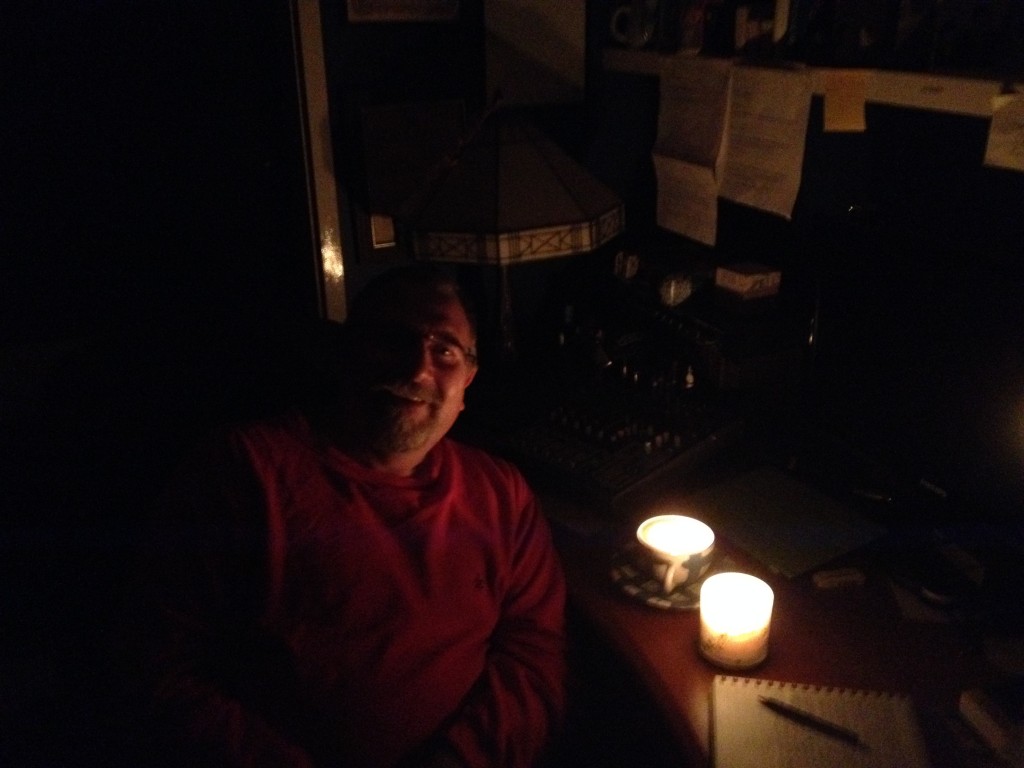 As I sit here at my desk bathed in candlelight, it never ceases to amaze me what chaos occurs when we have a power blackout.

Firstly everyone checks their fuse box to see if it is just them.  Then they look out of the front door to see if the street lights are out, and if the neighbours have also lost power.

Once that is confirmed to be true, then it starts.  The mad scramble for the dynamo torch (if you are fortunate to have one handy) or ferret around looking for candles and a lighter to get some illumination.

Then it really happens.  You realise that just about everything you were planning to do that evening required the use of electricity to help perform the task.

For Kim it was housework now that is is a little cooler.  For Ben it was homework on his computer, and for me it was recording an episode of Little Green Cheese Podcast.

Hissy fits and boredom, quickly followed by simple solutions to make the best use of our time until the power came back on.  Kim started to play a game on her iPad, relaxing instead of working.  Ben is running around outside, playing and having fun destroying some cardboard boxes, and I have taken up pencil and paper to write this tale without the use of a computer.

It does make you think long and hard about how our lives are ruled by the energy we consume.  It does the vast majority of our work for us.  Energy slaves if you will.  Now there is an interesting concept!

So what happens if the energy slaves leave us permanently?

No, not all at once, but over a period of years.  A slow energy descent.

It is well within the realms of possibility, and closer to reality than one may think.

As the world’s fossil fuel reserves peak in production and begin to decline (conventional crude oil has already peaked in 2005 according to the International Energy Agency), our energy slaves will slowly begin to vanish.

Infinite growth on a finite planet is just not possible.

Even the tight shale oil and gas fracking is only a stop-gap measure.  This additional production is propping up the plateau of peak oil demand.  It has been observed that these tight oil and gas wells decline by up to 80% after a few years of production, sometimes in the second year, forcing more wells to be drilled.  Costs to producers are much higher than extracting conventional crude oil fields which drives up production costs and ultimately flow through to just about everything we consume.

What has this got to do with electricity blackouts?

But hey, what do I know.  I am no geologist.

However, I do know this.  By looking at the evidence before me I see a shit-storm on the horizon.  A great big oil bubble inflated by hype and greed, contributing to our climate woes, ready to burst or slowly deflate over many years.  The way it pans out is yet to be determined, like most things in our future.

Climate change will add additional fuel to the proverbial fire, because without abundant energy, we may not be able to mitigate the affects.  See what I mean by a shit-storm?  Without a doubt, it will be very different to how we live right now.

Nothing to see here, just keep moving along.  We can keep growing our economies forever!

Sounds just like all the media hype about peak oil being dead and buried.  It’s all smoke and mirrors with no real solution at hand.

Oh look.  The power just came back on.  Time to type up the post.

How do you think the next decade will pan out regarding energy?  Do you think we have plenty, or is it a bubble ready to burst?