Gardening is so much fun, and even better when the objective is to grow your own food.  Today was a brilliant day for gardening.  Sunny, cool, and I was in a productive mood. 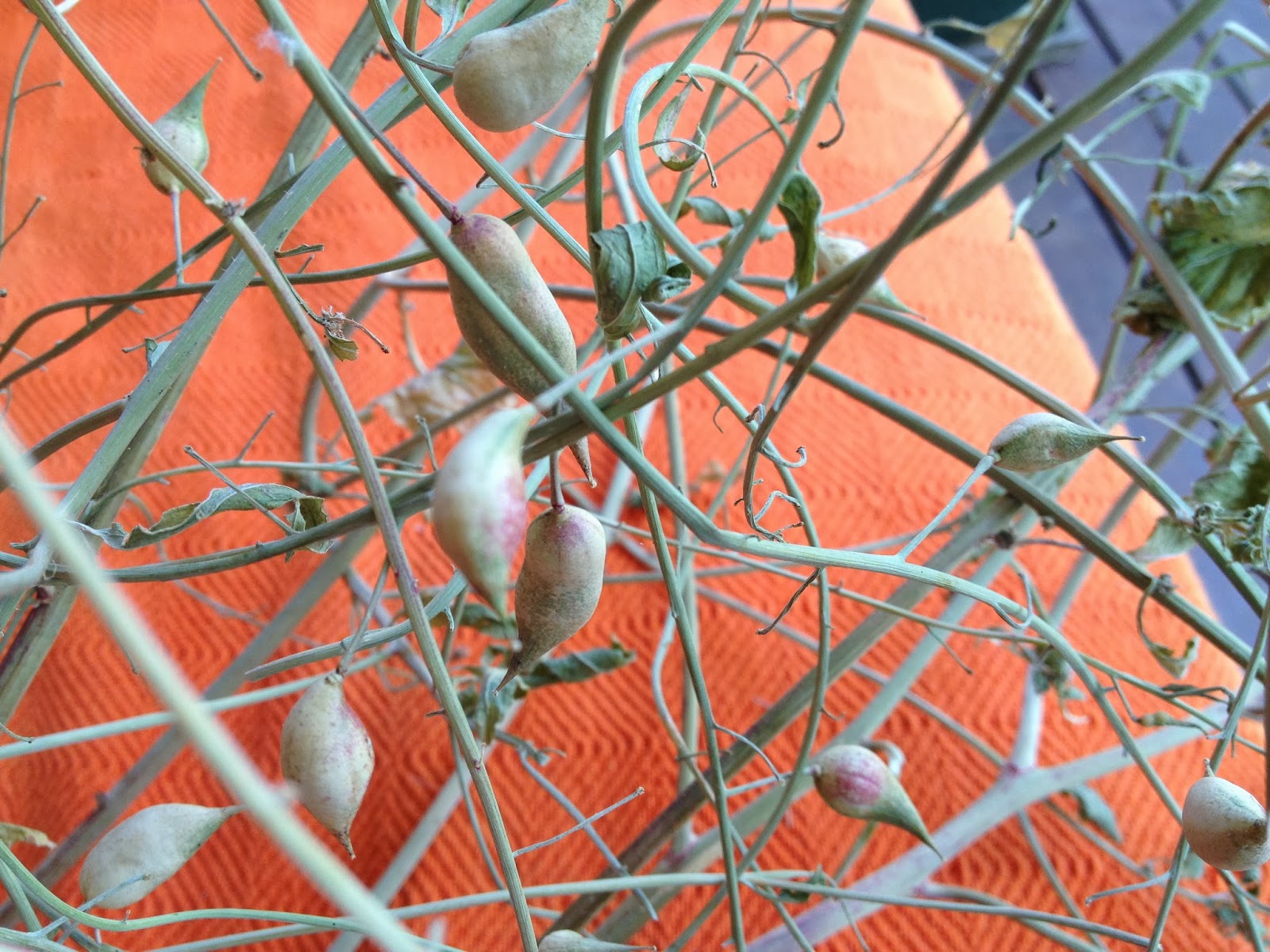 First things first, I had to collect some radish seeds that I had hanging up in the carport.  It is so easy to collect these seeds.  Let a single radish go to seed so that it forms these little seed pods.  Then pull the entire plant, roots and all, and hang upside down out of direct sunlight. 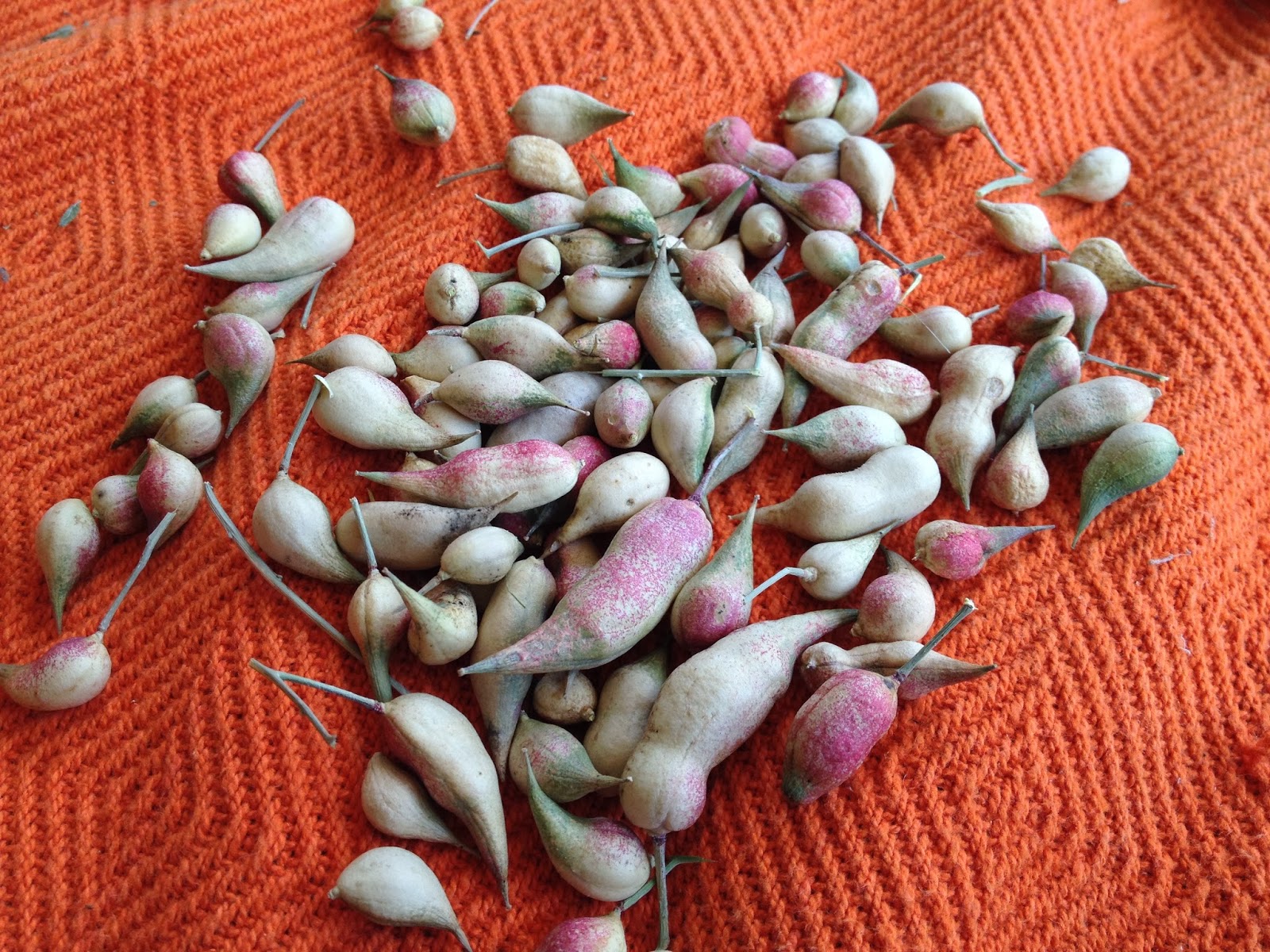 When the pods are completely dry, then pull off all the little seed pods.  Make sure that you collect the seeds on a surface that you can see the seeds. 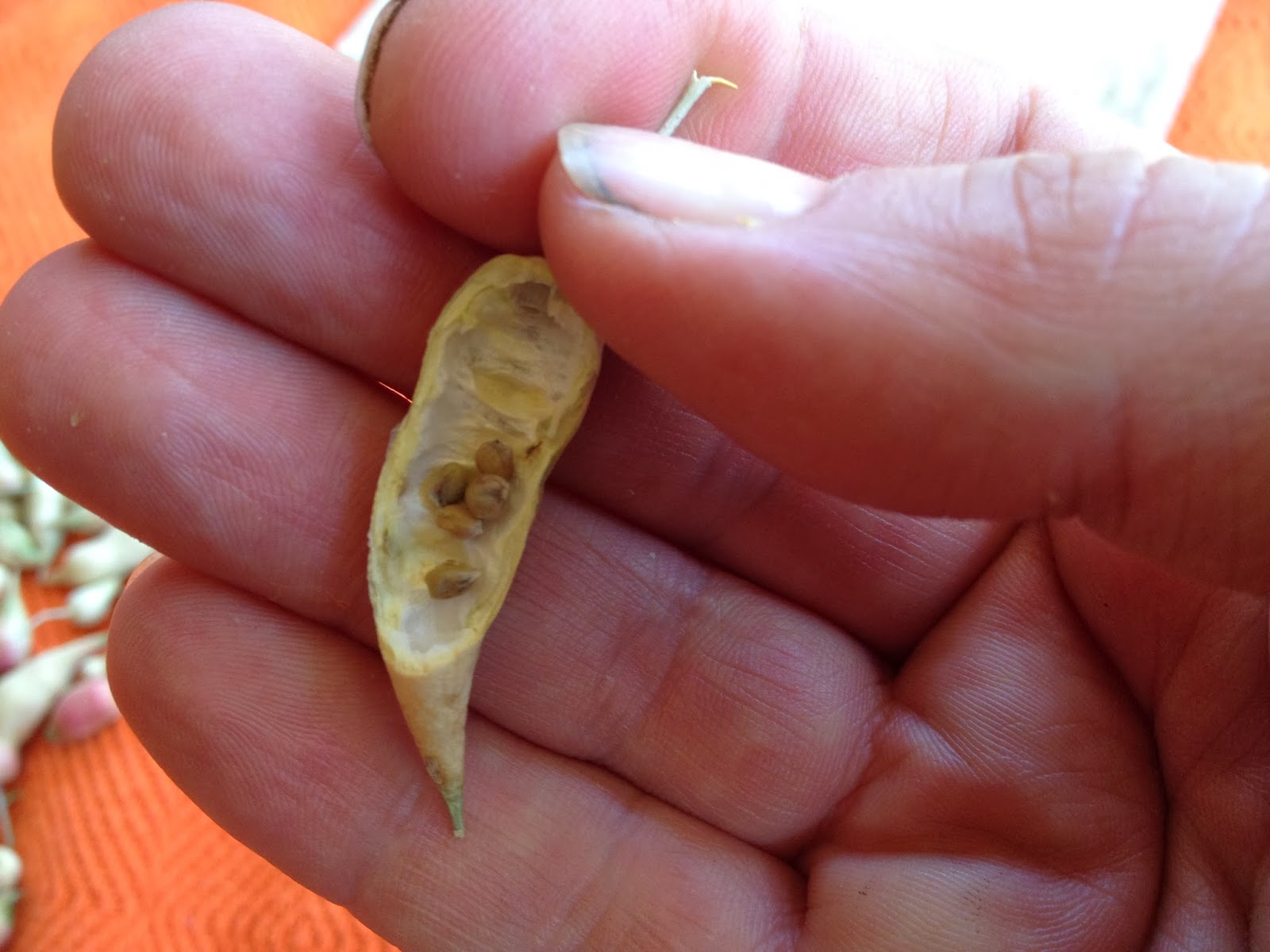 Here is what they look like once you split the pod.  The amount of seeds per pod range from between one and four.  Once collected, store them in a brown paper bag or small glass jar sealed with a lid.

I decided that I needed to grow some climbing beans, seeing that that the Scarlet runner beans were fried during the heatwave.  Mind you, that variety of bean are only good for collecting the seed to use as dried beans as the shell is rather tough.  It was time to put in my favourite bean, the Lazy Housewife.  This string less bean grows vigorously, and the yield increases the more you pick them. 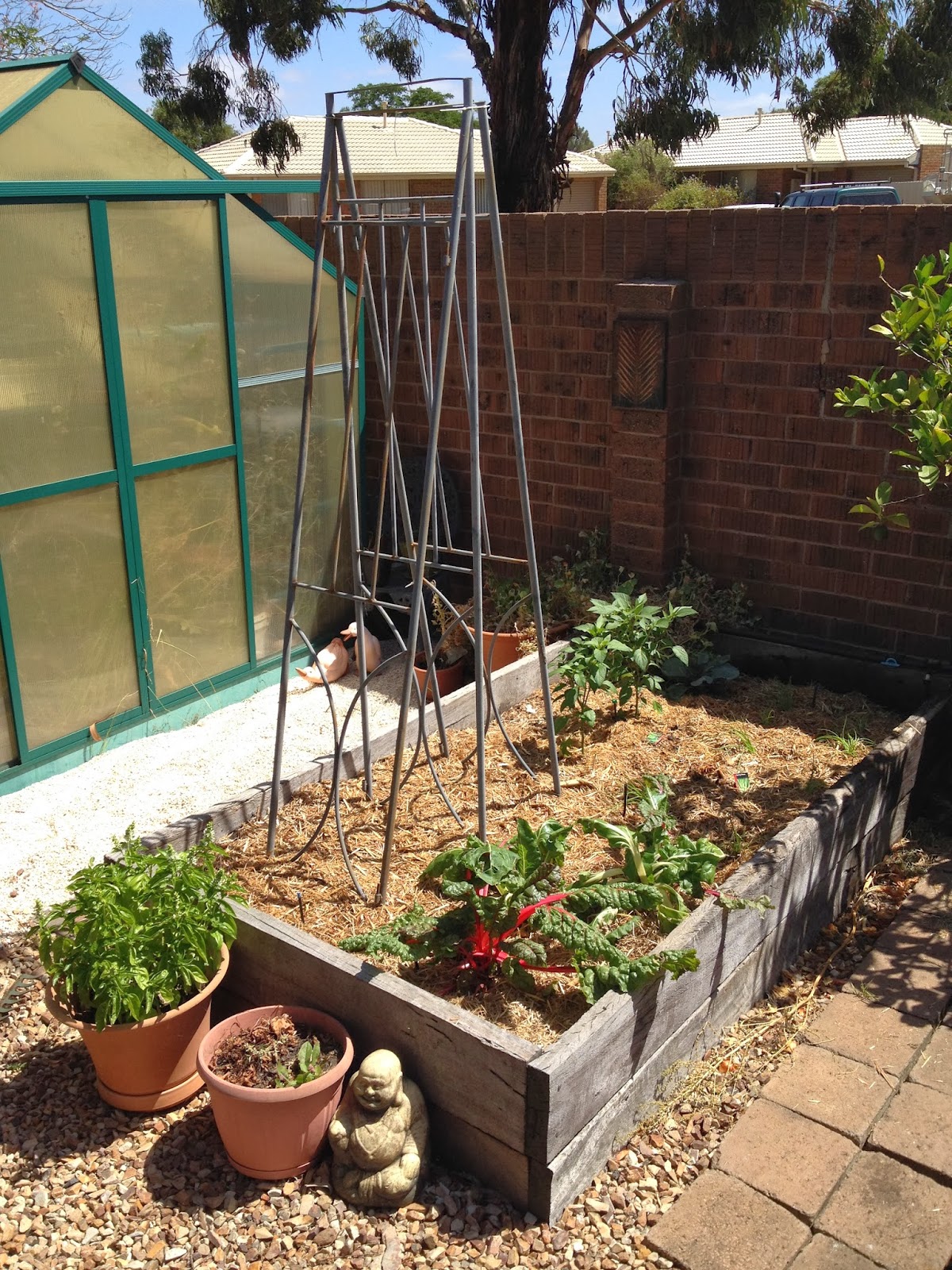 So to that end, I had to make a frame so that the Lazy Housewife could wind its way upwards.  The frame that I constructed is an upcycled portable gazebo frame that is just the right height.  It is made from tubular steel, which has been powder coated, and is over 8 year old.  I keep reusing these supports year after year.

I fastened three together with mini-cable ties that I had laying around, and planted the seeds at the base of each support.  We should see the beans in a couple of weeks, and should be able to pick the first pods in about two months. 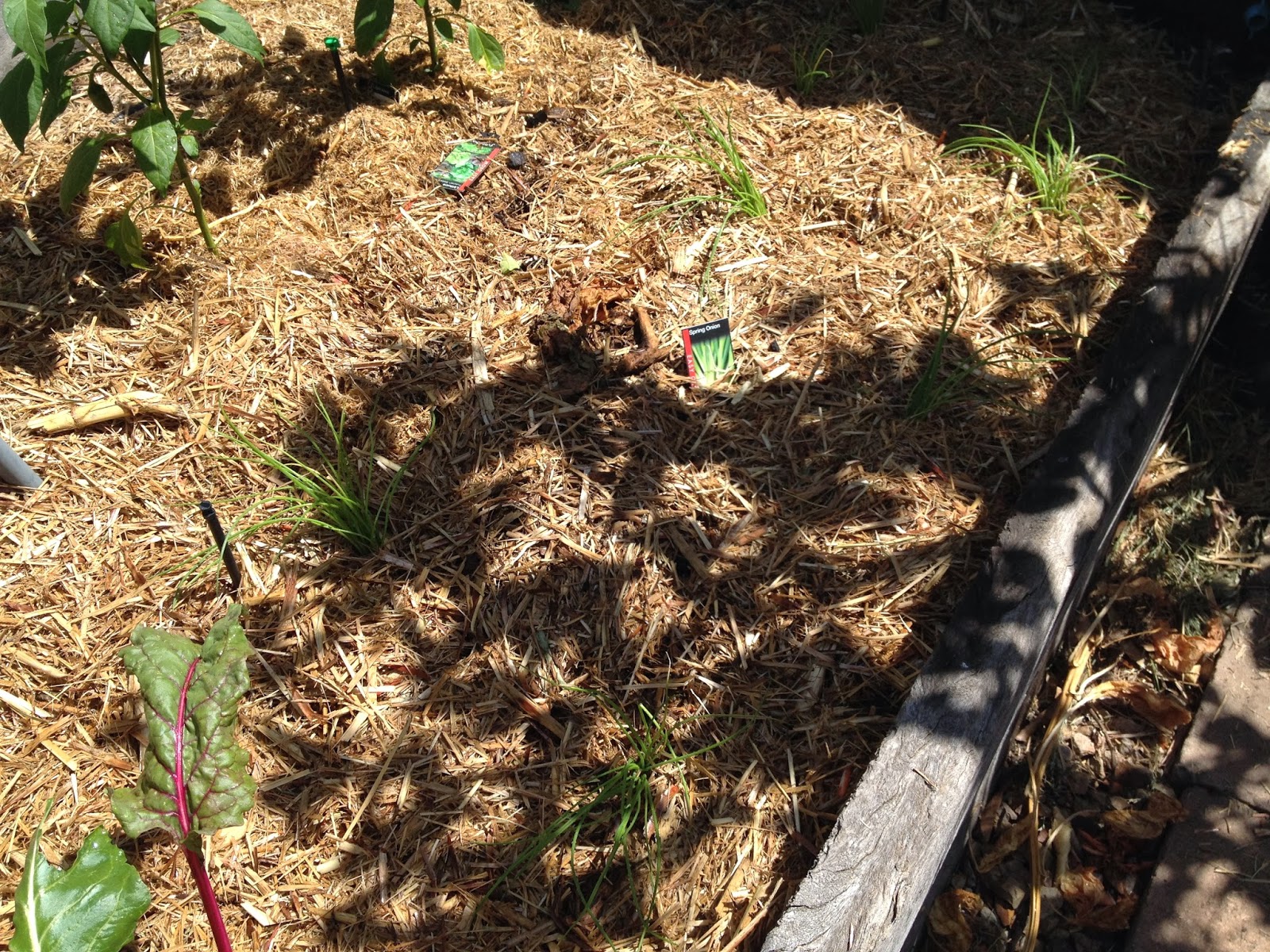 Kim requested that I put in some Spring Onions, so to get a quick result, I purchases a punnet of eight tiny bunches and popped them in the first bed next to the remaining rainbow chard.  They should be ready to harvest in about a month. 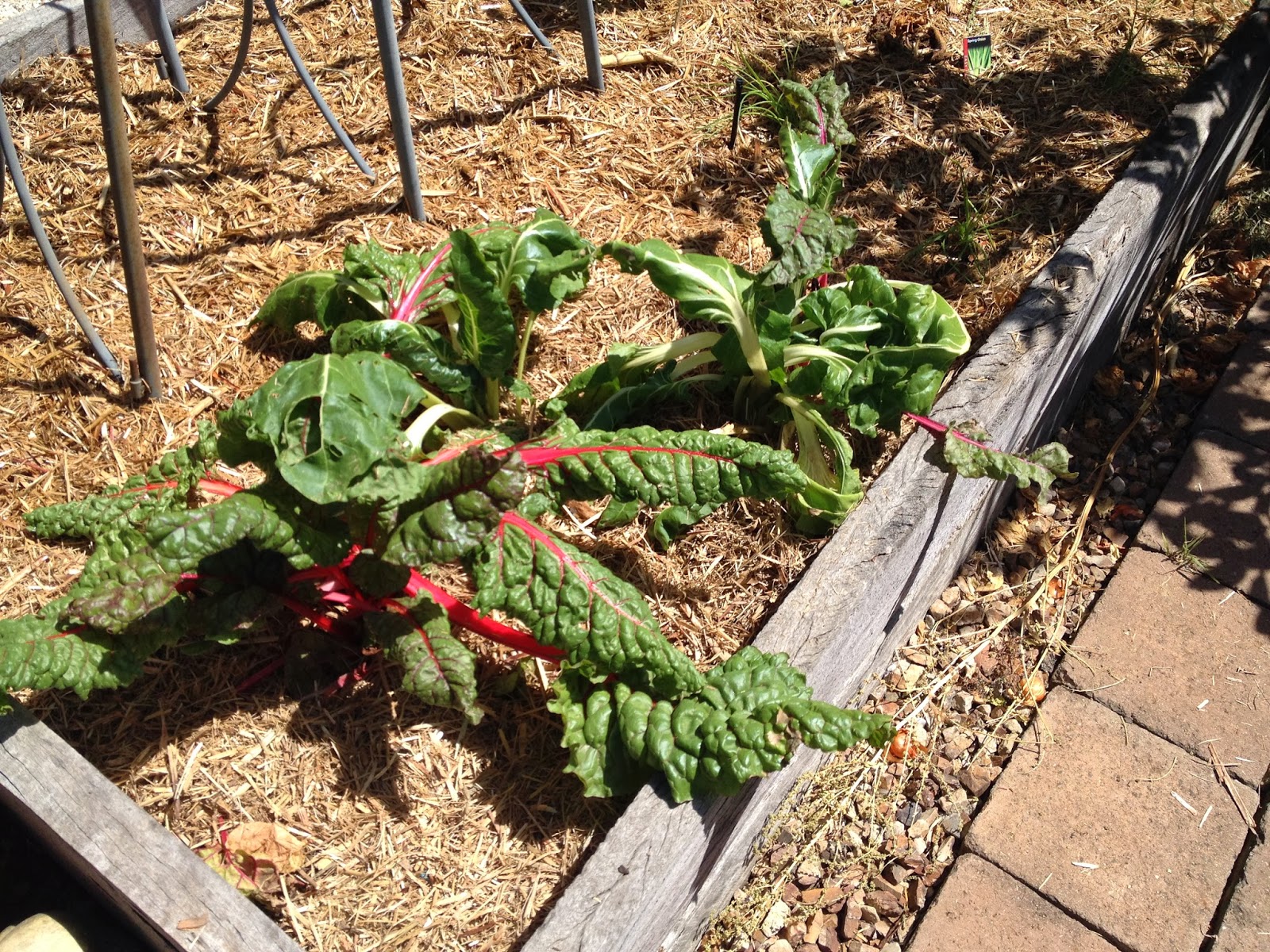 I thinned out the chard by pulling out all the plants that had gone to seed.  Those went to the chooks, and the smaller ones got a good water and a refresh of mulch.  These should last another month before going to seed. 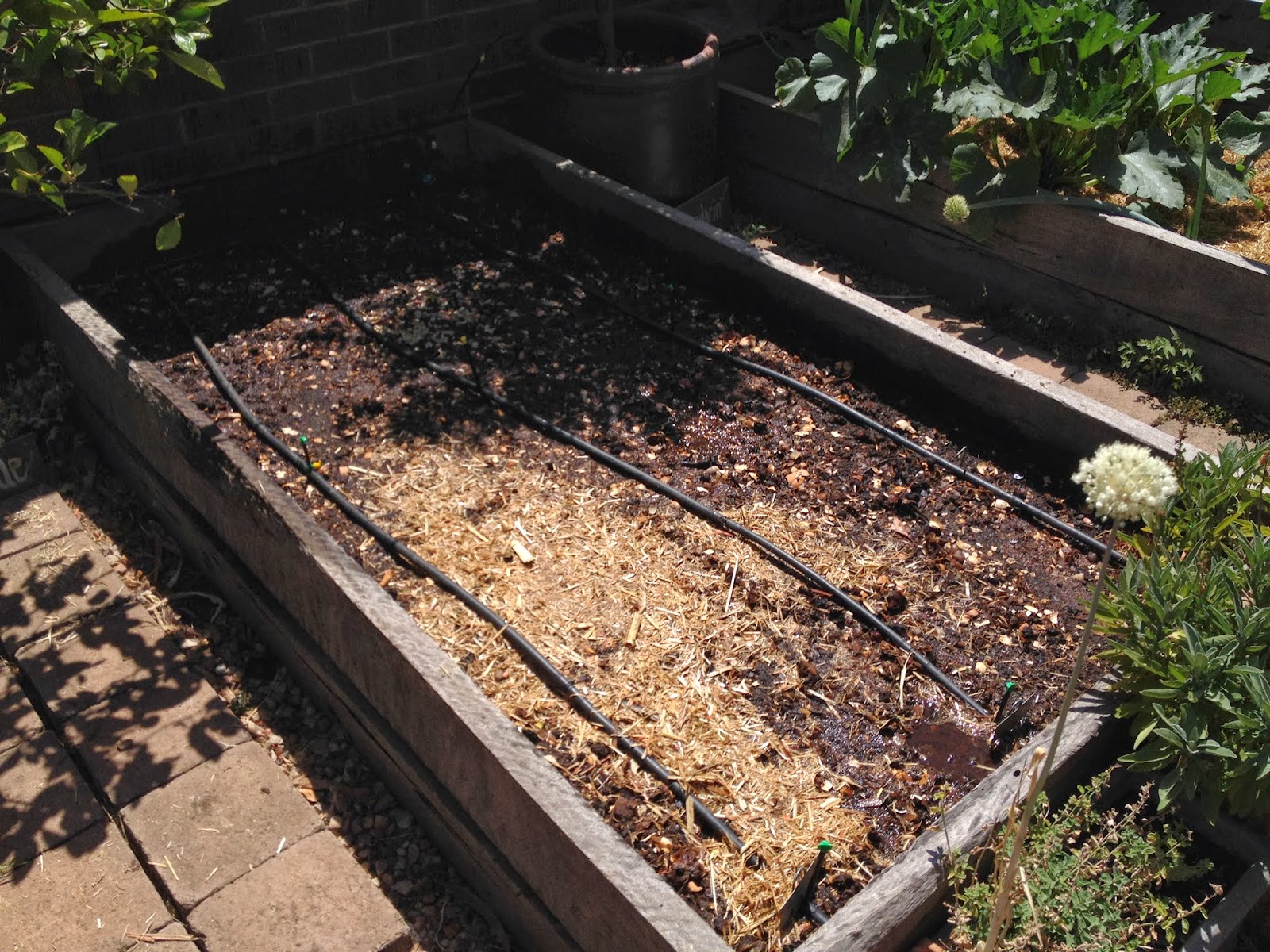 The bed had been fallow since I pulled all the onions and carrots a few weeks ago.  It had dried right out, so I had to rehydrate the soil for about 20 minutes before I could do anything to it.  Just a tip, and reminder to myself.  Always mulch a garden bed after removing the crop.  It keeps moisture in the soil, and the worms don’t leave or die.  Once hydrated, I threw on two large buckets of home made compost then raked it level.  I then watered in the compost, and when I thought it was all mixed in, I planted two rows of the radish seeds that I had collected.  They should be up in a couple of days, and harvest in about 3 weeks.  We love radishes in salads, and it is certainly salad weather.

Once I see the seedlings, I will mulch this bed like the rest.

Also, as the rainbow chard is coming to an end, I put a row of chard in this bed from seed I had collected.  There should be a good colour selection as I mixed them all up after collection. 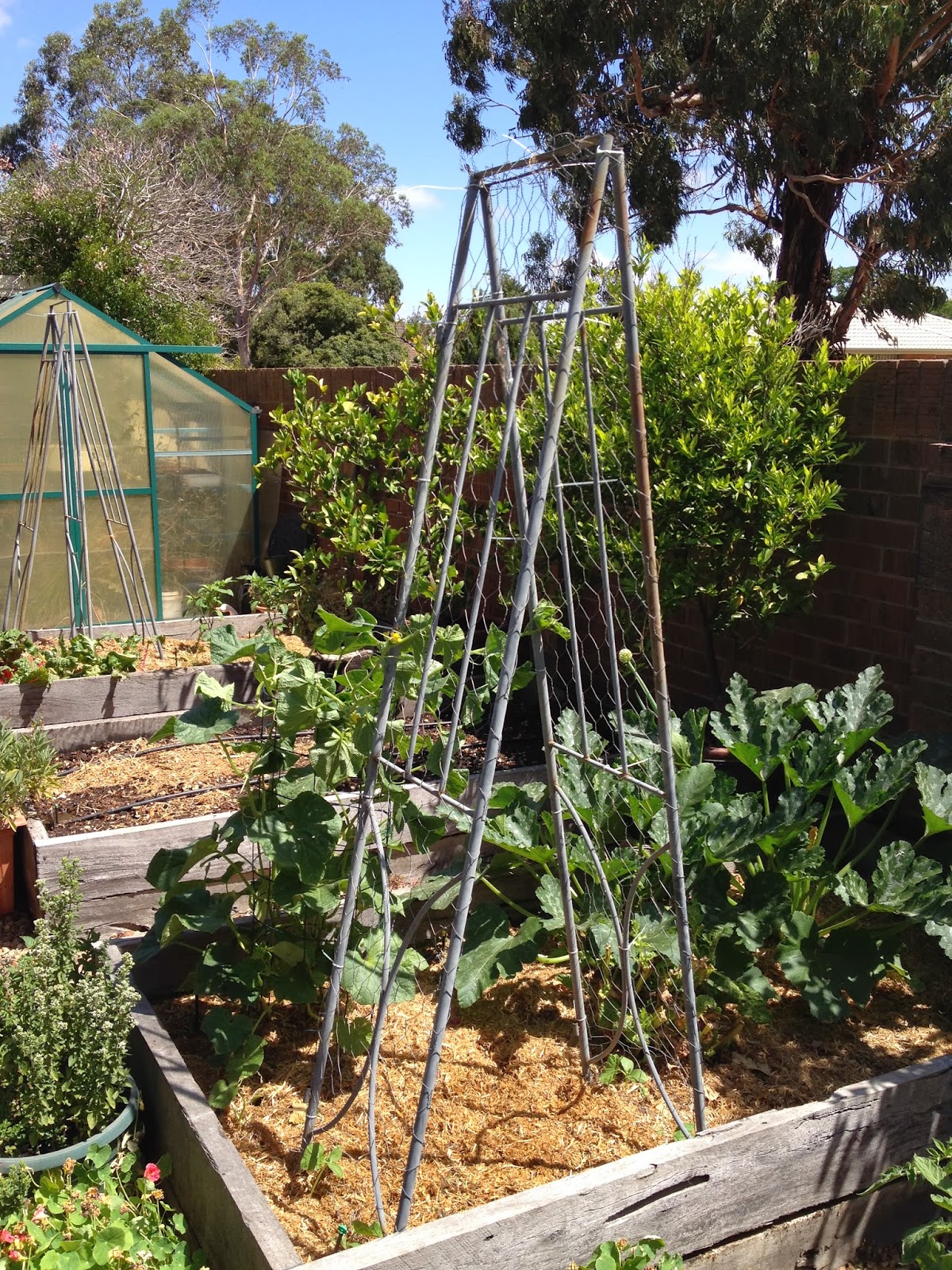 The cucumbers that I had been harvesting are simply delicious.  No more cucumbers wrapped in plastic for the entire summer.  The plants that I put in during November are still going strong, but I wanted more so that I could make some more bread and butter cucumbers for preserving.  They are great on sandwiches for lunch, so I didn’t want to miss out this year.
So I constructed an even taller cucumber trellis, made out of the same frame as I did for the beans. 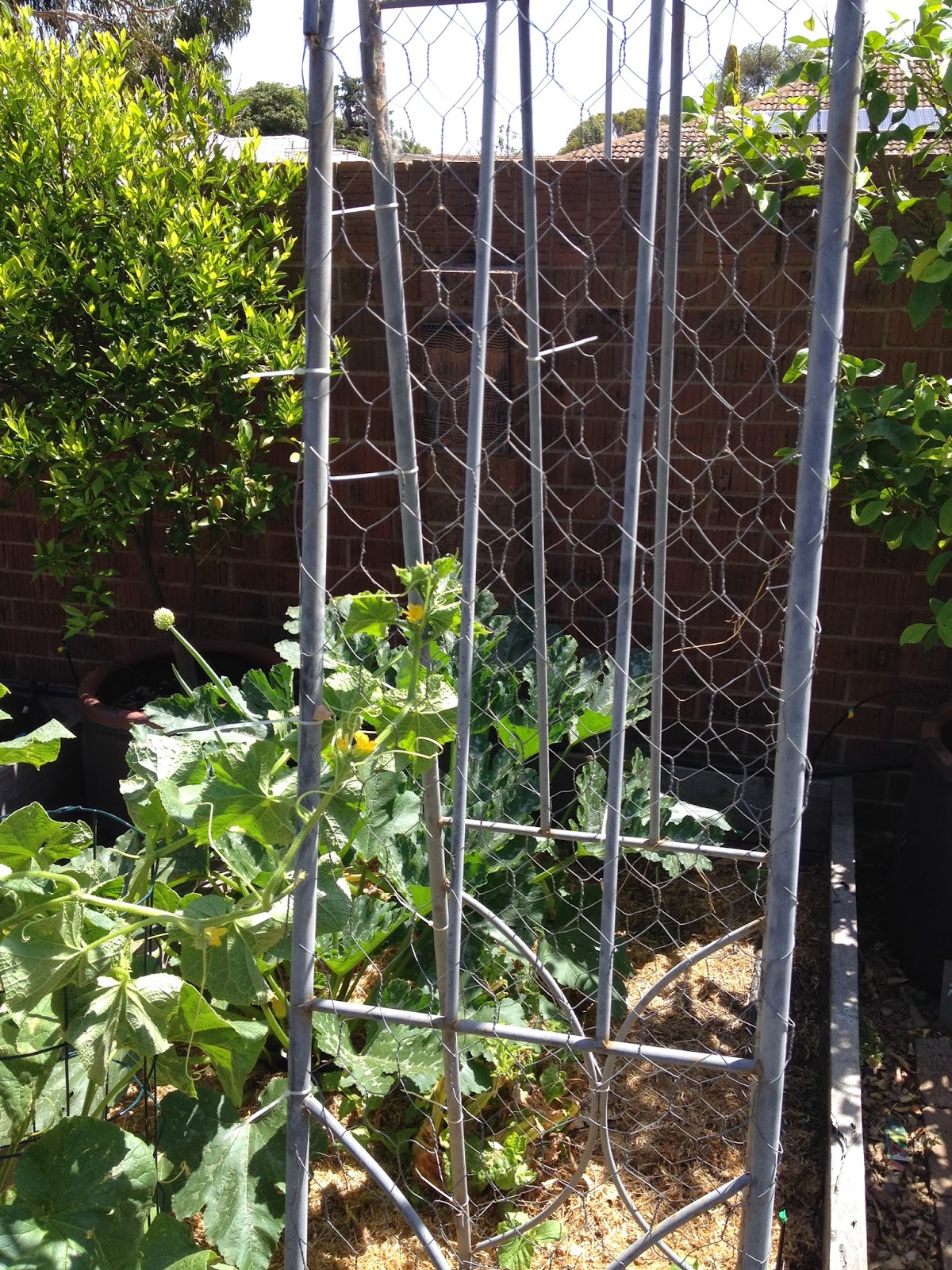 Now cucumbers have very small tendrils and find it hard to grasp onto thicker tubular steel, so I had to come up with a solution.  I found some large gauge chicken wire behind the shed, and cut a piece off the roll to the same length as the frame.  I then rapped the wire around the steel and cable tied the other side.  The tendrils should have no issue grasping on to this frame. 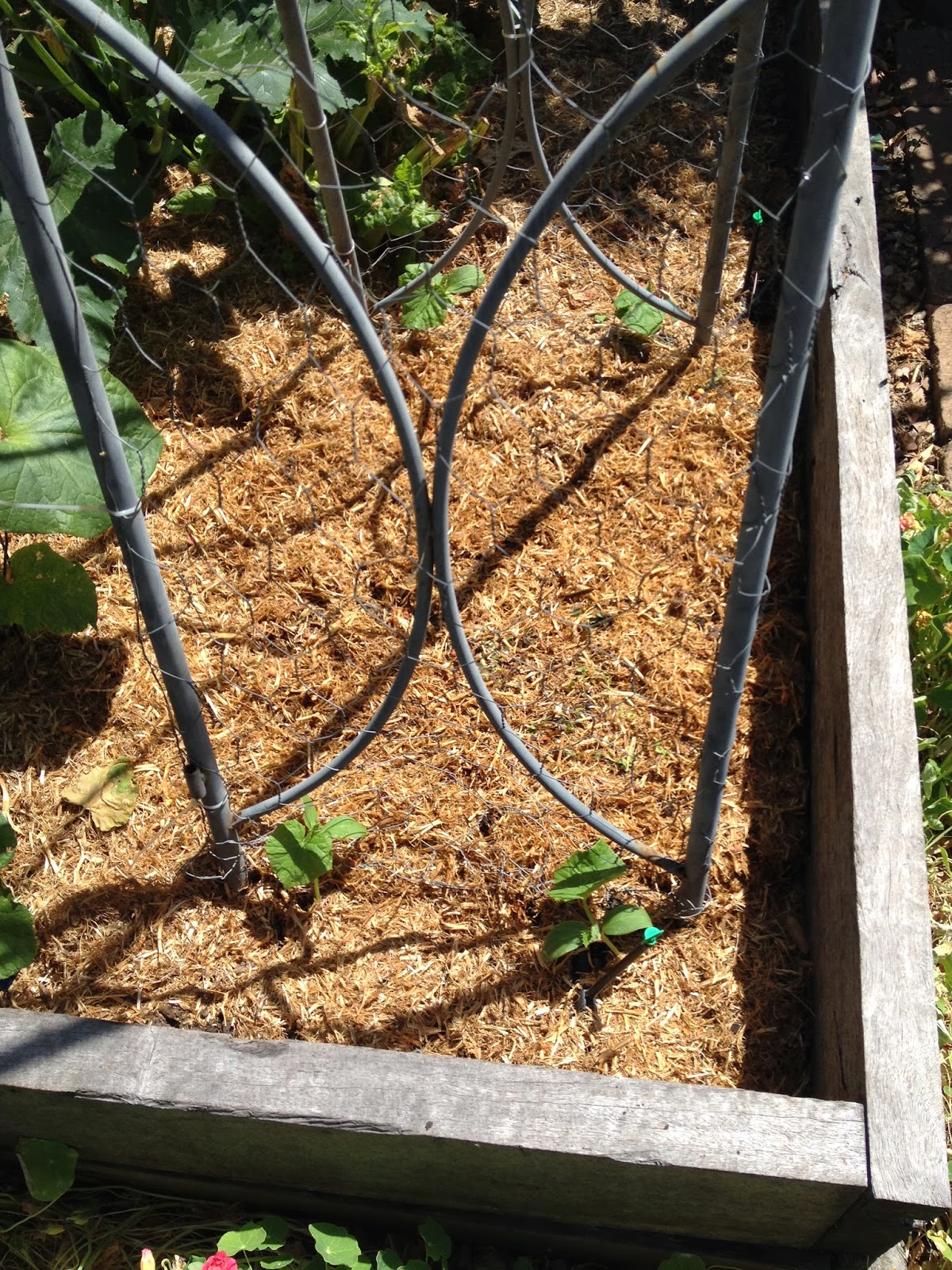 I then planted four large cucumber seedlings at the base of each vertical tube.  In the void between the two frames I planted a bush bean called Ying and Yang.  The bean seeds have amazing markings and look just like their namesake icon.  A friend gave me the seeds, so it will be interesting to watch how they grow.  The may be up to 8 bushes growing under the canopy of cucumber vines.  Time will tell.

I mulched everything with sugar-cane mulch as I ran out of pea straw (thanks for a wonderful Christmas present Lynda!).  I laid it about 5cm (2 inches) thick, so that should save me heaps of water and keep the soil cool.

After that, I called it a day.  I had intended to prep the front garden bed from which the potatoes were harvested, but decided I better use the rest of my Sunday for kicking back a little.  Not that I would call gardening work.  It is such a pleasurable endeavour.

Now you may think it a little strange for me to put in so much during the middle of summer, but let me tell you a secret.  The summers are getting longer.

During the last two years we have seen summer extend well into the end of the first month of autumn.  It is probably safe to say that it will happen again this year with such an angry summer.  I should get a good crop.

Has anyone else spend time in their patch today?  What did you plant or did you harvest something instead?