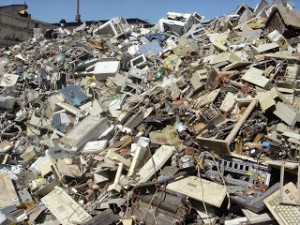 How many of you received a nice, shiny computing device for Christmas?  What did you do with the old one?

I am certainly not one to judge, as I have bought a few computers in my time.  However, I dispose of and recycle my computers responsibly, or at least attempt to extend their lifespan as long as I can by adding new components.

This post was originally published in December 2008, and is even more relevant today, now that our lives are surrounded by electronic devices.

Electronic waste or e-Waste as it is known, is becoming a massive problem in global landfills. PC’s as well as most consumer electronic goods contain many heavy metals such as lead, mercury and cadmium, as well as chlorofluorocarbons and brominated flame retardants, which can seep from landfills into water supplies or waft from incinerators into the atmosphere.

We now know that consumer electronics will leach, can leach, and do leach into the the water table. This contamination can last for many thousands of years and have dire health effects and consequences to all living things.

Cute video, but this is only one aspect.

So how do we fix the issue of eWaste? Well I can think of four straight up.

Reduce – reduction comes to mind straight off the bat.  Do you really need three TV’s and DVD players in your home. How many can you watch or use at once? When an item of consumer electronics breaks, ask yourself if you really need to replace it.  Is it a want or a need?

Repair – when something does break, think about repairing the item. 4 weeks ago, my Surround Sound AV receiver broke and wouldn’t power on. My first thought was to check out the latest models, but my green heart then took over and whispered otherwise. I began looking for repair centres in my local area and found that the closest was in Ballarat, some 70km away.

I had a couple of financial options at the repair centre. I could pay $30 up front and then get a repair quote to see if the item was worth repairing, or I could just go ahead and get it fixed and damn the expense. I chose the first option! After about a week the repair dude called back and said it would cost about $100 to fix the amp. What a bargain, as a new one would have cost anywhere from $500 to $2000 depending on how crazy you went. I asked the guy to proceed, and within a few weeks it was repaired and it now works like a bought one. The bill came to $102! It is well worth doing for major electronic goods, and I feel good for taking the time to fix the broken item.

Reuse – specifically with PC’s, upgrading is a viable option, as shown in the video above. By simply doubling the RAM in your PC, you will see a dramatic increase in performance. If you are running low on storage, ask your local PC’s expert if you can install larger hard drives in your PC. Large capacity drives are relatively inexpensive these days, and can be installed quickly and easily. I have had my PC for 4 years now, and have upgraded the video card, RAM and hard drives.

Instead of placing the old equipment into land fill, I sold them on eBay for someone else to get good use out of. All the kids have hand-me-down PC’s that I have acquired over the years, and it suits them just fine. The only PC’s that I intend to buy in future years are greener models like laptops or notebooks that have had the nasty metals designed out of them. They also consume about 75% less energy than a desktop PC does.

Recycle –  recycle old consumer electronics, don’t just throw them in the bin. There are many PC and electronic recyclers out there. Even my local recycling centre takes electronic goods, but there are dedicated PC recyclers in most major cities. By using these facilities, you are diverting these goods, and therefore the harmful heavy metals as listed above, out of landfill and keep our water and air cleaner for future generations.

So do yourself and the planet a favour and love the one you’re with!