Remember back a couple of weeks ago when I passed on the valuable skill of beer making to Amy?  To jog your memory, the post was titled “Beer Making With Amy“.  It was great fun and we put down two brews to ferment.

Two weeks later, with the beer ready to bottle, my trusty helper was called back to learn how to bottle the beer.

Now as I had a downshift day today, I decided to bottle the first batch myself.  So bottle I did, and silly me didn’t take any photos of the process.  I had a major drama with the tap, which did not work as planned, so I had to syphon the brew via a hose into each bottle without making a massive mess.  It went well, with sixty four 330ml bottles filled, capped and put away for storage.  Sweet Matilda Pale Ale, in the bag.

After Amy finished work we got stuck into the task at hand. 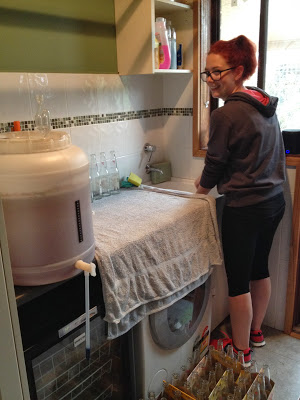 The first order of business was to wash the 66 bottles required for this batch of Aztec Gold.  All the bottles were clean (as I rinse them after pouring the beer out), so all we had to do was quickly scrub each one and sanitise. 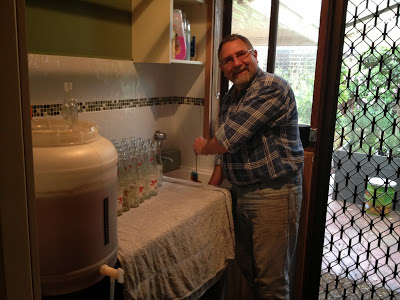 Here I am, showing the student how it is done.  Anyway, it didn’t take too long to clean them all.  As we were using Sodium Metabisulphite, we had to rinse all the bottles with cold water so as not to leave a funny taste in the beer. 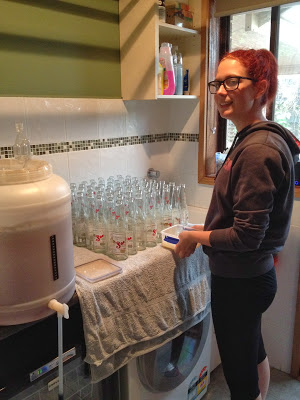 With all the cleaning completed, it was time to prime each bottle with sugar.  We used Coopers carbonation drops as our priming sugar, but you can use 1 teaspoon of white sugar if you like for each 330ml bottle.  Double the sugar if using 750ml long necks. 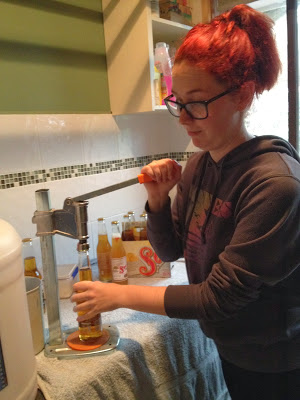 I was sitting down, filling each bottle, and Amy had the job of capping.  I haven’t laughed so much in ages.  The first few bottles, her technique needed work, and she was a bit cack-handed, but got there in the end.  Well done DD. 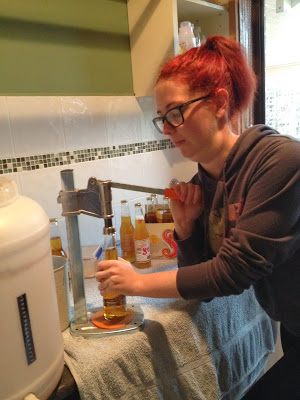 I think my daughter needs to work on her biceps!  She was scared that she would break a bottle by capping too hard, but I told her that the machine would not let that happen.  Mind you, I have broken a few bottles in my time using a hand capper that you have to hit with a hammer, but never with a machine like this. 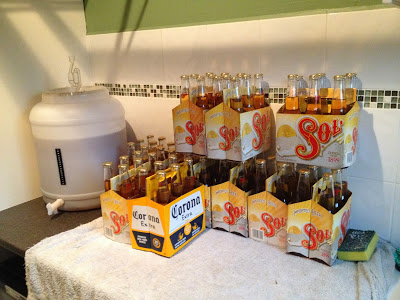 So after about two hours, we finished the entire process.  Here is what we had to show for our hard work.  66 bottles all ready for storage in the stockpile cupboard.

We felt so cocky that we put down another Cerveza that you can see in the fermenter.  Because we are now both seasoned brewers, we put this batch down in 30 minutes.  Quick as a flash.  Should be ready for bottling in a week or two.

As payment for all her hard work and skill learning, I gave her a dozen bottles of Sweet Matilda, and a six pack of Aztec Gold to take home.  This gives her the added responsibility of making sure that the beer is kept in a dark coolish place for secondary fermentation to take place and add the carbon dioxide to the beer.

We shall be cracking a few cold ones in three weeks time!

I love passing on simple living skills to my kids (hint, hint).  Maybe one of them will get interested in gardening one day and ask me how to grow food.  That would be so much fun!

Who else is passing on simple living skills for the future?