I love passing on skills, don’t you?

Today I had the opportunity to pass on my beer making skills to my daughter, Amy.  Out of the blue on Wednesday, she asked me if we could make some beer on the weekend, and that she would help.  She mentioned that she thought it was about time she started to learn all the skills to start living sustainably.

I don’t know what possessed her to want to learn more.  Am I starting to look old and frail so that she thinks she better learn as much as she can quickly?  Maybe not.  I should have asked her.

Anyway, the first beer we made was my old favourite, Aztec Gold.  It is a kit beer which is very simple to make.  Firstly I showed her how sanitise all the equipment.  Then she boiled up the 2 litres of water and mixed the ingredients.  Aztec Gold is a light alcohol beer, usually coming in at about 2.8%, because you only add 500gm (1.1 lbs) of Dry Light Malt to the kit. 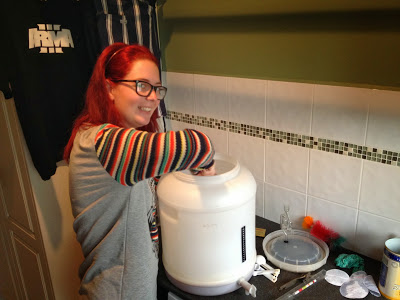 Then Amy stirred the wort to make sure it was mixed thoroughly.  Love the smile.

I then topped it up with water to 23 litres, screwed on the lid and fitted the airlock.  On to the next batch of beer.

This time we made our own type of beer.  We added a can of Coopers Real Ale, and a can of Morgan’s Caramalt amber liquid malt.  This adds body and flavour to the beer, whilst decreasing the bitterness. 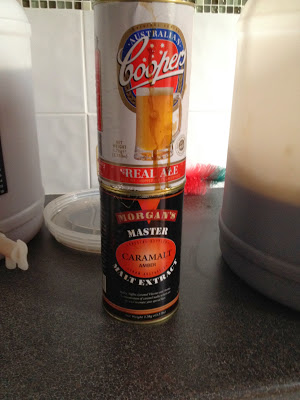 Same procedure as before, but this time Amy did it all.  I find that by showing the student how to do it all first, then letting them perform the entire procedure, they learn the skill much better. After dissolving the two liquids in 2 litres (2 qts) of boiling water, Amy topped it up to 23 litres.  She then screwed on the lid and fitted the airlock, and checked for a seal. 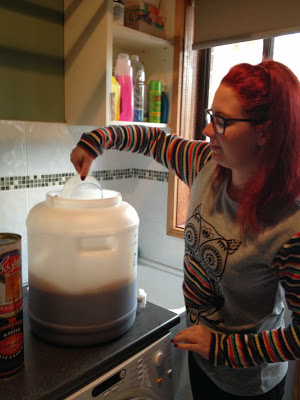 So because this was a new beer, never before made in the house of TGOG, it needed a name.  After all, the other beer is called Aztec Gold, which is very cool, so we needed a snazzy name for this one.  After a few silly names, Amy came up with ‘Sweet Matilda Dark Ale‘, after the sweetness and caramel flavour of the wort.  I like it.  Kind of catchy.

Now, my philosophy regarding beer making is that you can’t make beer if you don’t have a beer once it you have put it into the fermenter.  So that is exactly what we did.  Here is the beer master and his student enjoying a drop of my Fat Yak style beer that I made over two years ago.  It still tastes as good as the first time I tasted it.  No, I tell a lie.  It actually tastes ten time better, now that it has matured. 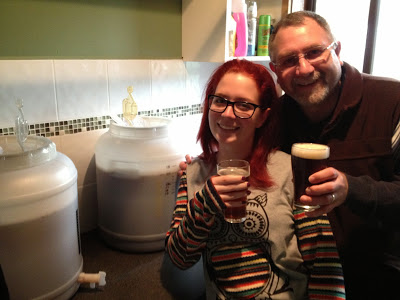 What lovely Father/Daughter time we had.  It was a pleasure teaching my daughter this essential sustainable/simple living skill!

Have you passed on any simple living skills to your kids this weekend?