On Thursday night, I was invited to attend the book launch event for Changing Gears, by Greg Foyster, where there were over 80 guests.

I had never been to a book launch before, let alone one with a bicycle theme, but was willing to support my friends Greg and Sophie.  Besides, there was free solar brewed beer and food. 😉

It was held in the Affirm Press HQ located in South Melbourne, in what looked like their loading bay.  Nice open space, and along the lines of the simplicity mantra of making do with what you have.  There were wooden pallets leaned up against one wall to be used as bike racks. Very nice.

Anyway, on to the photos and my perspective of the event! 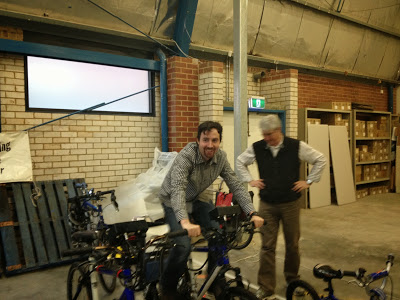 Future Spark supplied two bikes that have generators attached, and the electricity generated from them was to power the PA system during the speeches.  Here is Greg showing everyone how it works. 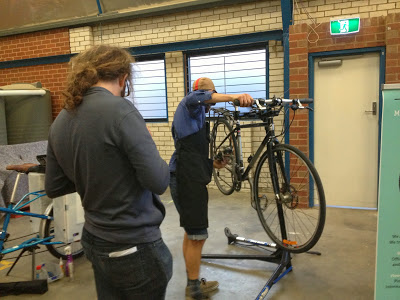 Good Cycles kindly offered to provide a free bike assessment and tune-up for cyclists, so everyone was encouraged to ride their bike to the event.  The mechanic must have repaired/tuned about 15 bikes on the night. 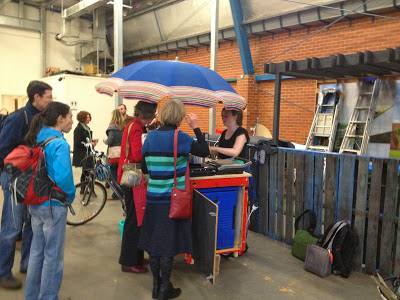 Then there was the food.  It was supplied by TacoBike, owned by Cara Munro.  The vegetarian tacos were delicious.  All served off a trailer attached to a bike, naturally. 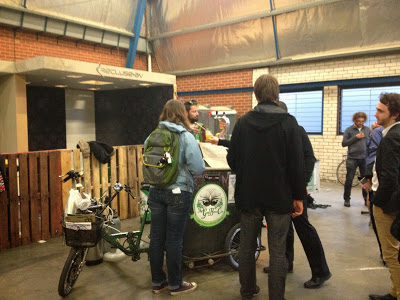 And of course, a book launch wouldn’t be complete without beverages on a bike! 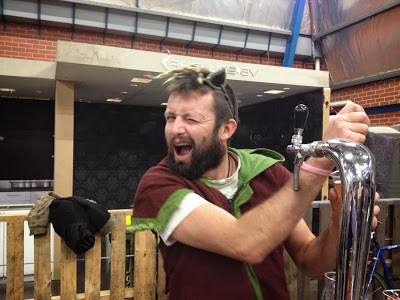 These were supplied by The Good Brew Co, owned by the cheeky Dean O’Callaghan, who’s beer, cider, and soft drinks (magic tea) were too good to refuse.  His Pilsner was outstanding!  I can only say that I did partake in lots of beer cart chat and the odd beverage!  Thankfully, shanks pony and public transportation were my designated driver for the evening. 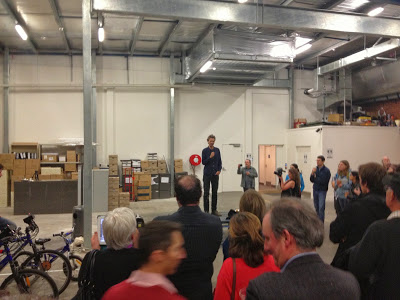 Then it was on with the speeches.  With the Future Spark bikes whirring away, Greg was introduced by Michael Green, a journalist who once upon a time interviewed me for The Age newspaper (he is freelance).  Nice to meet him in person, a great guy and you can check out his blog, http://www.michaelbgreen.com.au/.  Nice introduction as well. 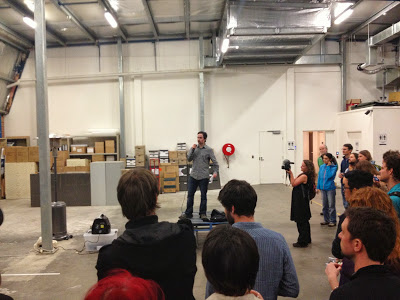 Then there was Greg’s speech.  Anyone who knows Greg would understand when I said he over prepared for it.  At the start of the evening he showed me his three pages of prose, but in the end, after he had just finished peddling for Michaels introduction, he was out of breath and just winged it.  He kept it short and sweet (10 minutes), but meaningful.  I think he really captured the essence of the book. 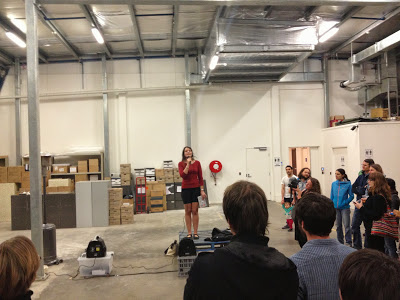 Then it was Sophie’s turn on the milk crate podium.  She ended up reading out all of the daggy things that Greg got up to on their trip up to Cairns.  It was hilarious!  Both Greg and Sophie spent the rest of the evening book signing, which is what the author does at a book launch.

I spent time working the floor, meeting new people including Greg’s Mum and Dad who mentioned that they loved my podcast interview with Greg and Sophie.  Apparently, according to Greg’s Mum, I sound just like Shane Jacobson (aka Kenny), and very down to earth.  Well there you go, who would have known! 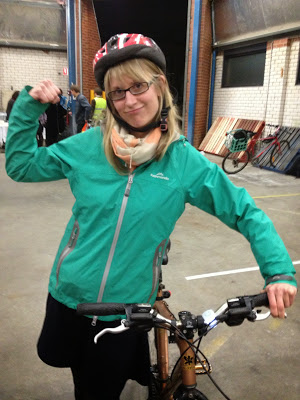 Then, after many beers with my new friends Samuel Alexander and his partner Helen aka FunkBunny (pictured above in her riding gear), it was time to walk to the tram stop, take a little trip to Southern Cross Station and catch my v-Line train home.

I had a great evening, albeit a late one, arriving home at around 11pm.  If all book launches are like this one, I want to be invited every week.

You can catch Greg and Sophie on their cycling book tour.  They are currently riding from Melbourne to Sydney and stopping frequently along the way.  You can see their itinerary at this link (scroll to the middle of the page); http://simplelives.com.au/book/.  I highly recommend their book and please take the time to say gidday if they are in your neck of the woods.

It was great to be surrounded by so many like minded people, don’t you think?  Have you ever been to an event where you just fitted in perfectly?