Ludacris.  Unheard of.  Insane.  What if someone steals them? How many vegetables do you really need?  Rubbish I say!

These are all comments that others have said when I mentioned that I was going to build a veggie patch in my front yard.  Fortunately, I do not listen to comments such as these and tend to forge my own path in life, especially my sustainable path.

So this weekend, a long talked about plan came to fruition.  We finally had the money, materials, and the man/woman power to make these garden beds.

For those who don’t know, we have terrible soil around our area.  With only about an inch of topsoil, and then it is dense clay.  Great soil for the indigenous flora, but not so good for annual vegetables.  So we have to build our own soil, or make raised garden beds.  I chose the latter, as you get much faster results.

However, here is what I had to play with.  It was a rather big area that was devoid of moisture in the soil due to a massive and old pine tree that was beginning to lose its limbs. 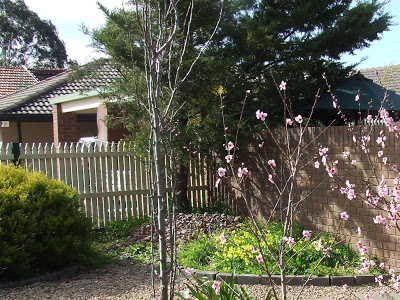 So down came the tree, which we cut into firewood for the clay oven. 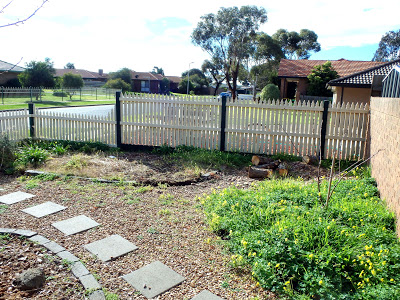 We also removed an overgrown bush.  We also had to move a Cherry tree that was engulfed by masses of golden oxalis.  We transplanted the cherry tree to near the front gate, and cleared the area. 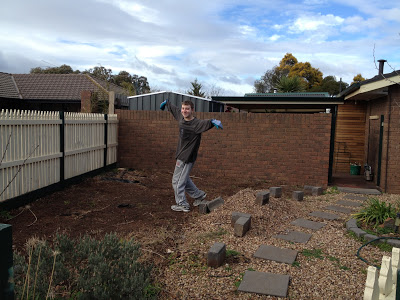 We then went about designing the beds.  After a few attempts, we came up with this. 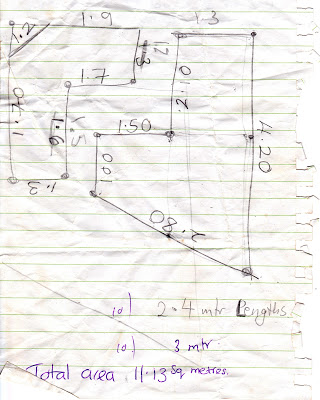 Two L shapes with one inverted.  It gave us over 11 square metres of additional growing space, which is very close to the size of my four main veggie beds on the west side of the house.  North is to the left of the plan. 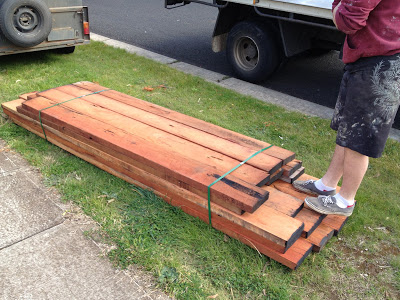 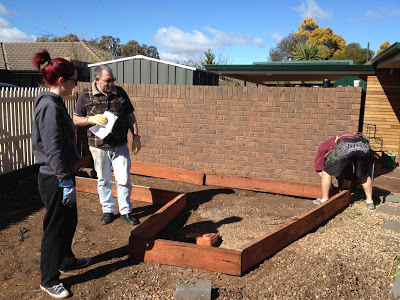 So the willing (and paid) workers for the day were Jake, Amy, and Megan, with Kim on catering, and me supervising under strict orders by all not to lift anything heavy due to my back.  The first bed started to come together after about two hours of preparation. 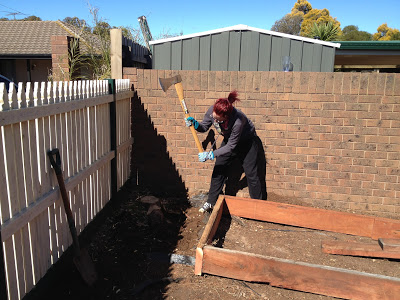 However, we came across a snag.  The pine tree stump was so high that we could not get the garden bed level.  So it was out with the trusty axe to chop out the lateral roots.  It took Amy, Megan and I about an hour to cut through and dig it out. 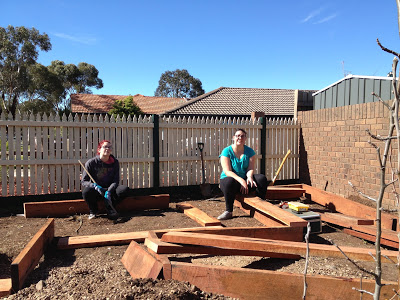 It was time for a well deserved rest after we had cut the wood for the second tier of the first bed. 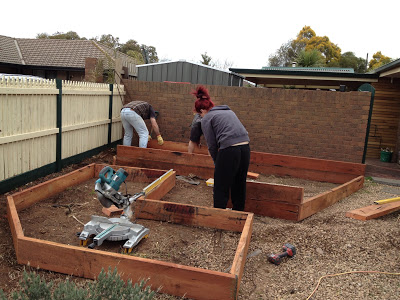 Then we constructed the second bed.  Jake (a carpenter by trade) brought along his nail gun, drop saw, and various other tools which made the work so much easier.  We used hot dipped galvanised nails to fasten it all together. 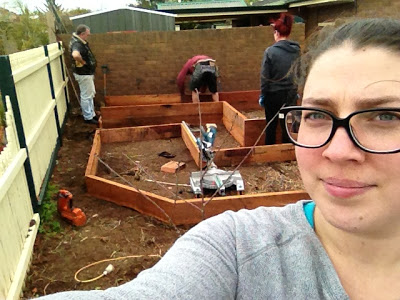 Nice selfie Megan.  You can see my transplanted cherry tree just over her shoulder, and all the real workers in the background!

I must say that Jake really loves his nail gun, as every joint was fixed with about six or seven nails.  It will never come apart in my lifetime. 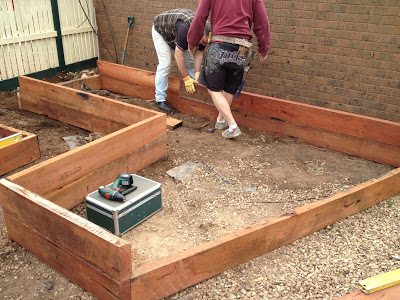 We started on the second layer, which was much easier once we had the first in place.  Some of the wood was so warped that we had to forgo the nails and use bugle head screws.  These massive screws helped straighten the wood at the joints. 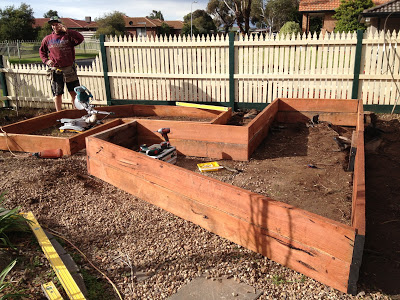 Once the second layer to the first bed was completed it was on to finish off the second bed before it started to rain. 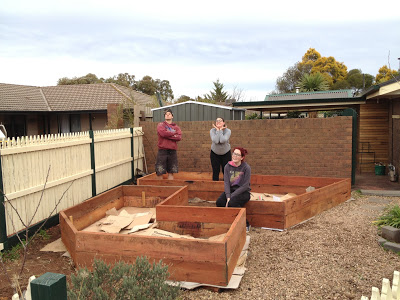 You can imagine our aching muscles by this stage, but we soldiered on, laid thick cardboard under each bed to stop the weeds from breaking through, and cleaned up.  There were not many red gum offcuts due to Ben’s maths skills.  I tasked him to study the design and then calculate how many pieces of wood we would need to minimise waste.  He was spot on, and there was only a small bucket of offcuts that I will use in the clay oven as fuel for the next pizza night.  Clever lad.

Anyway, with the beds complete, it was time to call it a day and take the mandatory silly photo!  We were bone tired, but very pleased with our efforts.

We are taking a break next weekend.  In a fortnight we will be filling the beds in the same style as I documented in this post titled “How To Make Raised Garden Beds For Vegetables“.

Just in time for spring planting.  I will be growing sweet corn and lots of spuds, with a bit of room for pumpkins and melons which will sprawl over the edges.  This will let me plant out the main beds with Tomatoes, leafy greens, eggplants, chillies, capsicums (bell peppers), and the like.

I love reclaiming unproductive space around our yard.  It is amazing what you can do when you put your mind to it.  Who says you can’t grow food in your front yard?