My Dad once told me many moons ago that there are three things that you do not discuss at a Barbeque.

If you did, he warned, a fight or definitely an argument would be the outcome, and there would be tears.  I have held these words to be true over the years, and have not wavered from his wisdom.  Arguments have been few, and fights non-existent.

Well guess what? We are not at a BBQ, and it’s time for tears.

I am up for a fight, because I am pissed off.  I want to talk about our future, and unfortunately that means talking about politics.  I may even lose a few readers or even friends for what I am about to write.  I hope not because I like you all very much.

Let me explain the situation here in Australia. We are just under two weeks away from a general election.  The campaign runs for around two months.  The current party in power is the Australian Labor Party (ALP), who are probably just left of centre, and the major opposition is a coalition of two parties, the Liberal party and National Party (LNP), whose membership ranges from right of centre to hard right.

I loathe both of these political parties because they lack vision.  I hate their bullshit.

They lack vision to see a future where there is no need to trash the environment/Great Barrier Reef/wildlife reserves (you name it basically) to dig up dirty fossil fuels to sell overseas.  They also have no humane solution for asylum seekers nor care.  There is also no vision as to what we need in the way of solutions for an energy descent.  The LNP has promised to axe the price on carbon and use tax payers money to give to business to lower their emissions.  This party has also promised to suspend marine parks.  That is just plain stupid.  There are many reasons that I disagree with their policies but these are the main ones. 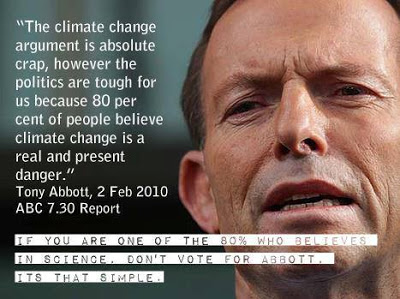 So, I am going to call it out.  I am not going to vote for either of these old political parties.

As far as I see it, there is only one political party in this country that care about all of these issues that are dear to my heart.  One party that actually have viable policies that have been fully costed, that will actually make this country a better place, and put it in good stead for the future.

That one party is the Australian Greens.  That is who I am going to vote for on 7th September 2013.  I am not telling you who to vote for, just stating that I have made a conscious choice about which political party I want to make policy for our great nation.

If you don’t agree, that is fine.  We can still be friends.  I wholeheartedly believe that we all need to think for ourselves.  It is your vote and you cast it how you like.

You may like them or loathe them, but they have a heart.  If you want to see how their environmental policies stack up against the other major parties have a look at the infographic below from the Australian Youth Climate Coalition.  You can check out their other policies (they are not all about the environment) here at this link. 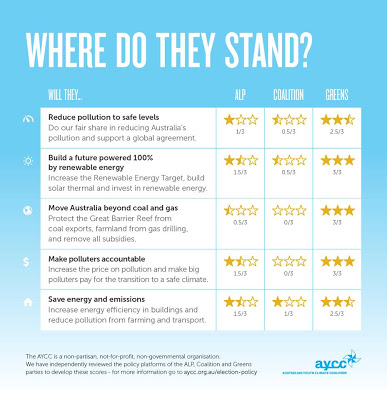 Gandhi once famously said; “a nation’s greatness is measured by how it treats its weakest members”. I agree, everyone needs a fair go, even those that have nothing. Unfortunately the old parties are stuck in the same mould.  There is not much between them as far as policies go, and not much of a fair go.

However I believe that the Greens policies are along the same lines as I think.  They may not be perfect, but they at least have a plan for the sorts of issues that are facing humanity.  The things I talk about on this blog.

So, if you are undecided for this election, and can’t pick between either Labor or LNP, then remember that there is a viable third choice.  A choice that cares about future generations and not short term greed.

Like I said, I am not telling you who to vote for.  It’s your vote.  But remember this, your vote is precious and you only get to use it once every three years.  Time is running out.

So please, use it wisely. 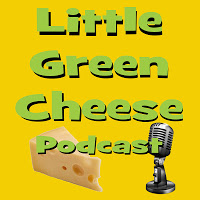 I recorded a great cheese making podcast episode last night, where I talked about all things milky.  Yes, milk is one of the topics that most home cheesemakers need a little more information because not everyone has access to fresh raw milk straight from their own backyard herd.  That stuff in the store is confusing.

I discuss the common types of processing that milk can be subject to before it arrives nicely packaged in the fridge section of your store.

The episode also features a news item about Bruny Island Cheese Co, which you may has seen on the TV show Gourmet Farmer on SBS.  Nick Haddow is a well deserved winner, as are all artisan cheese makers!

Jean Michel from Nice, France dropped me a line with a couple of questions about microfiltered milk, and Tangela asks about home made cheese presses.

All in all, an entertaining episode.

If you are interested, pop on over now to Little Green Cheese to have a listen to the show!

Firstly, I must say that because I have been spending so much time making the new garden beds in the front yard, the main veggie patch has been a little neglected.

Today I remedied that issue.  After spending the morning bike riding with Ben, and catching up on a bit of reading, and sprinkling a sack of pulverised cow manure around the base all the fruit trees, it was high time to spend a solid afternoon cleaning up the veggie garden. 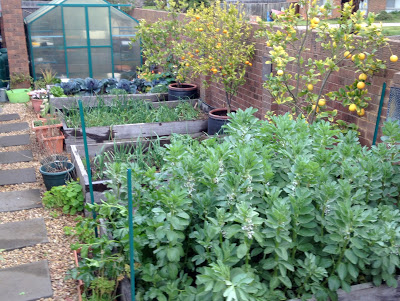 The veggies were all growing well, except for one red cabbage that was covered in aphids (good chook food).  This season there have been no black aphids on the garlic or onions, because I practiced a little bit of companion planting.  In the cabbage patch I let nasturtiums grow, and left the weeds to grow.  This has deterred most of the cabbage moths so far.  We have been harvesting the green cabbages during the last month, and are even having some for dinner tonight. 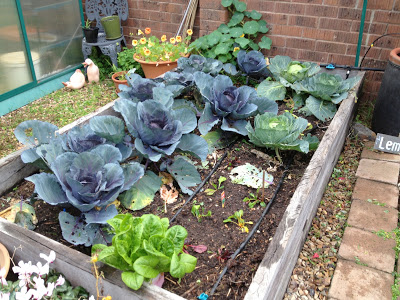 I have been replacing the cabbages with rainbow chard and lettuce seedlings, and keeping it all well fed with worm wee tea. 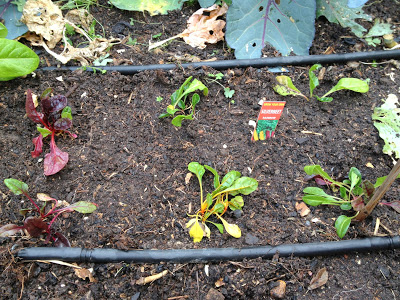 In between the rows of onions, I planted carrots and radishes so as to confuse any potential pests on any of those plants.  It has worked well, with the radishes being long eaten, however the carrots are still growing strong and the onions starting to fatten.  There is also sage and spearmint in pots at the end of this bed which may have helped as well. 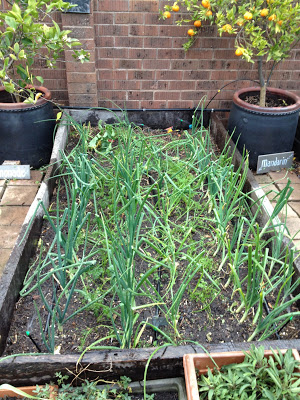 The next bed has garlic and red onions.  Once again I planted carrots, but they have not grown very well.  As gardeners luck would have it, the bed is dotted with little oregano seedlings.  I believe that the smell from these plants may have helped keep away any pests.  There are also two very healthy silverbeet plants, that grew in the right place all by themselves.  The oregano and silverbeet both grew from the layer of compost that I spread before planting. 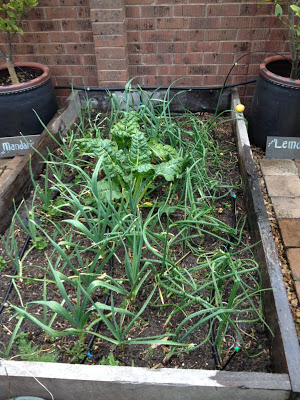 Broad beans are one of my favourite vegetables, and I planted an entire bed full this year.  It is growing strong and tall, and no sign of broad bean rust.  The days have still been quite cool, so this fungal infection has not reared its ugly head so far.  There is also a celery plant at the end of the bed which I am waiting to go to seed, so that I can use some in cooking and collect the rest for this season. 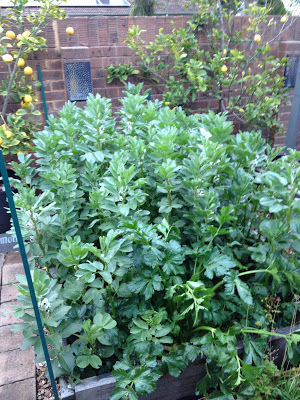 The berry bed is dormant, however the first signs of leaves are starting to appear on the thornless loganberry.  I pruned this rather large bush about two months ago in the same manner as I did last year.  Instead of lopping it off close to the ground, I cut off the really old wood, and leave the recent canes and cut to about a metre.  I then tie it with old panty hoes to the trellis that I made.  If last years crop was anything to go by, it should be excellent again this year.  No sign of the rhubarb which is planted to the left of this bed. 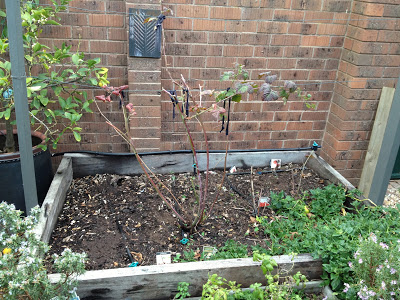 Lastly, I am amazed by the flowers that just pop up anywhere they please.  I leave them there of course, encourage them with a little bit of blood and bone fertilizer at the start of winter, and just let them be. 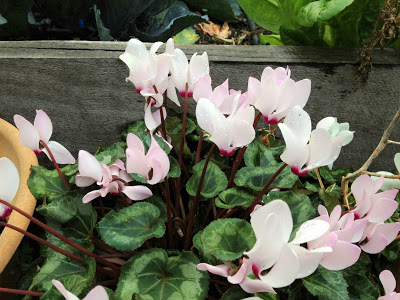 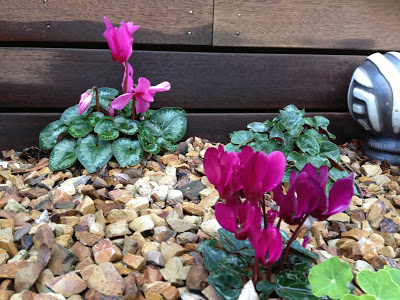 Cyclamens and Nasturtiums growing everywhere!  It is wonderful spending the afternoon in the garden.  With my hands firmly in the soil, I felt truly grounded and feel revived.

Looking forward to next weekend as we are filling the front yard garden beds.  I already have desiree and royal blue potatoes chitting out of direct sunlight, so need to get them into the grown in the next couple of weeks.  The new beds could not have come at a better time.

Did you spend any time in your food garden this weekend?  What did you accomplish?