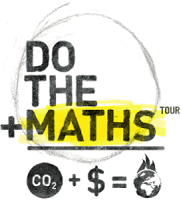 Bill McKibben is coming to town to a major east coast Aussie city near you, very soon.

And guess what? I’m off to see him in Melbourne on the 7th June.  I’ve my ticket, and bought one for Amy, my eldest daughter who is a high school teacher.  We want to learn what we can do next, because we want to make a difference to our future and that of our children and grandchildren.

Why is the Do The Math(s) Tour so important, and what does maths have to do with climate change?

Well, here is a quick explanation given to me by some great people at 350.org.

To grasp the seriousness of the climate crisis, you just need to do a little math. We have 5 times as much oil and coal and gas on the books as climate scientists think is safe to burn. We’d have to keep 80 percent of those reserves locked away underground to avoid that fate.

2 degrees — In Copenhagen, almost every country agreed to a 2 degree C (3.6F) target for temperature rise. We have already raised the temperature .8 degrees C, and that has caused far more damage than most scientists expected. A third of summer sea ice in the Arctic is gone, the oceans are 30 percent more acidic, and since warm air holds more water vapor than cold, the atmosphere over the oceans is a shocking five percent wetter, loading the dice for devastating floods.

565 gigatons — Scientists estimate that humans can pour roughly 565 more gigatons of carbon dioxide into the atmosphere by mid-century and still have some reasonable hope of staying below two degrees. But since we’ve increased the Earth’s temperature by 0.8 degrees so far, we’re currently less than halfway to the target. But, in fact, computer models calculate that even if we stopped increasing CO2 now, the temperature would still rise another 0.8 degrees, as previously released carbon continues to overheat the atmosphere. That means we’re already 3/4s of the way to the 2 degree target.

2,795 gigatons— The Carbon Tracker Initiative, a team of London financial analysts and environmentalists estimate that proven coal, oil, and gas reserves of the fossil- fuel companies, and the countries (think Venezuela or Kuwait) that act like fossil-fuel companies, equals about 2795 gigatons, or five times the amount we can burn to avoid 2 degrees.

The problem
Known reserves of oil, coal and gas companies exceed 2,795 gigatons of CO2, or 5 times what we can burn if we want a decent shot at avoiding runaway climate change.

The fossil-fuel industry is allowed to dump its main waste, carbon dioxide, for free. They have no economic incentive to stop business as usual.

Our political system is broken and has not yet grasped the seriousness of the problem.

The solution
Only a global movement can gain enough strength to change our politics.

A price on carbon is necessary to make renewable energy price competitive with fossil fuels, and to convince the biggest polluters to become clean energy producers

We need to understand as a society that fossil fuel companies and their business plans are the problem: ‘we have met the enemy and they are Shell (or Santos, Lake Oil, AGL, or any other Aussie fossil fuel company you care to mention).’

Sobering stuff which we need to hear.

Not convinced.  Think of it like this.  At our current rate, we’ll blow through our 565-gigaton allowance in 16 years, around the time today’s kinder kids will be leaving from high school.

Or for those who don’t have kids, think of it this way.  The 565 gigatons is how many drinks you could have and still stay below that limit – the six beers, say, you might consume in an evening. And the 2,795 gigatons? That’s the three 12-packs the fossil-fuel industry has on the table, already opened and ready to pour.  To keep the planet safe, and all the species that live upon it, we need to keep 80% of that industry plans to burn in the ground.

So I urge you all who live in Brisbane, Sydney, Canberra, and Melbourne to take the time out of your busy lives, and go and see Bill help us come to grips with this problem and give a possible solution.

I will leave you with this parting thought: 2 degrees Celsius, 565 gigatons of carbon left to burn, and not many years left to stop it.

Lets get on with it.