I am over it!  Stinking hot days, and sultry hot nights.  Can’t work in the garden.  Can’t sleep well at night.

Summer was supposedly over twelve days ago and all we have had since then is unseasonably hot weather.  The maximum temperature at our home on Monday was 37.8C (100F).  Today, the temperature is now passed above 30C so it has just surpassed all consecutive days of 30C records dating back 156 years.  It is forecast to be a maximum of 37C again today! 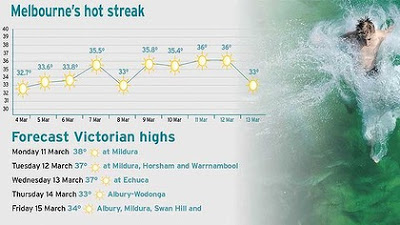 In fact, this heat is predicted for another two more days until a cool change passes through (fingers crossed), so all previous records will be broken.  Nationally, it was the hottest summer since consistent records began in 1910.

Subsequently, my summer garden tidy up has been delayed, as has my winter planting in the veggie patch.  It is simply a case of keeping the garden alive at the moment, and certainly no time to be planting seedlings, unless I want them fried of course.

It is not just the garden that has suffered.  People suffer as well.  Some of you may know that Kim has Multiple Sclerosis (MS).  She was diagnosed back in 1999, two months after Ben’s birth, and went technically blind for two weeks, with a full recovery after two months.  Difficult times for both of us, but we got through it stronger.

What has that got to do with the heat, I here you ask?  Well the vast majority of MS sufferers are dramatically effected by hot temperatures, and they suffer from heavy fatigue, much more than non MS people.  As the temperature rises during the day, you can visibly see her draining of energy, whereby I step in quickly and take over whatever task she was attempting to perform.

There are only two ways for her to recover after a ‘meltdown’.  Sit in a cool room with an ice pack on her head, which only works sometimes, or go for a swim in our pool.  It has been very difficult keeping any room cool, even with air conditioning, so she has been swimming morning and night to prevent any big meltdowns from occurring.  She is managing okay at the moment, but if summers continue to become hotter, as they are predicted to become due to climate change, I am not sure what our options are going to be.

We could move house to a cooler climate, but even Tasmania has been affected by the heat, so going further south is not really and option.

Yesterday, we decided to save our pennies and get the house weatherized by professionals.  I don’t care how much it will cost, or how much longer I have to push out my retirement, I just want our home to be a comfortable retreat next summer.

Additionally, over the winter, I will be building shade structures for all my raised garden beds, to keep the direct sunlight off the vegetables.  This adaptation method should increase yield and productivity.  Anything has got to be better than vine fried tomatoes, frazzled peppers, and cooked zucchinis!  Cooking is for the kitchen not the veggie patch.

The chooks have lots of shade now that the mulberry tree in Cluckingham Palace has doubled in size in one season, and we are topping up their water twice daily.  So they are coping okay.  Got to look after the girls, and I am so glad that I build CP a couple of years ago.

Anyway, I found some tips for those in our local area which you can check out in the info-graphic below (click to enlarge). 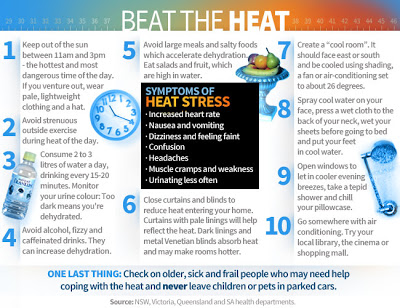 You know, I really hoped that we – the human race – would have been well on our way towards combating climate change by now, seeing that we have known about it for decades.

Looks like we are well on our way to frying ourselves, if we don’t do something soon.

How are you handling the heat here in Greater Melbourne?  Is anyone else suffering from their own bout of extreme weather?

During the Sustainable Living Festival, I had the pleasure to attend a talk given by members of the Victorian Wind Alliance.

The presenters talked about the benefits of Wind Power and the real facts behind this type of renewable energy.

I really enjoyed the details within the talks regarding community ownership, and community support.

I recorded two of the presenters which I have included in this episode with their permission.  You will hear from Dan Cass from Hepburn Wind, and Peter Reefman from Portland Sustainability Group, who both had very interesting talks.

Listen to the Episode Below (00:18:43)
Download Listen in a New Window iTunes Stitcher SoundCloud Leave a Review Clammr It Subscribe via RSS Subscribe on Android RSS Patreon

You can find the Victorian Wind Alliance website at http://www.vicwind.org.au/

Love the power of the wind!

Also, you may have noticed a new feature on this blog.  I have added a sidebar widget that lets you record and send me a voicemail, via the widget if you so desire.

It is a very simple process as long as you have a microphone connected to your PC, which most do these days.  You can leave me questions or suggestions, that I may talk about in podcasts or write about in the blog.  I will always ask permission from you before posting your content.

So, don’t be shy.  Keep the questions and suggestions coming.

Now that we have reached the bumpy plateau of Peak Oil, the inevitable economic contraction awaits us.

As you know, I am an advocate of re-localisation.  I have written many posts about Peak Oil, and the suburban fiasco that awaits us.  The time to re-localise is now, not a few years in the future, because it takes time to learn the post peak oil skills required to run a low energy society.

Contrary to the popular media belief that the end of Peak Oil has arrived like this article at Bloomberg (read the comments, which tell the real story), the real experts at the Oil Drum and ASPO, still predict a global contraction of the oil supply sooner rather than later.

So just to refresh everyone about exactly what is at stake, I found this video that explains the link between Peak Oil and Economic contraction.


I followed the link on the video and found a very cool spreadsheet, if you want to figure out if you are in a decent position as we get closer to the long descent.  The originating website is www.poaec.com

You can find the MS Excel spreadsheet titled POAEC_Report_Card_v1.4.xls at the link which will help you figure out your current status.  It even has lots of solutions should you want to learn more from decent sources.

I used the spreadsheet and this is the score I received. 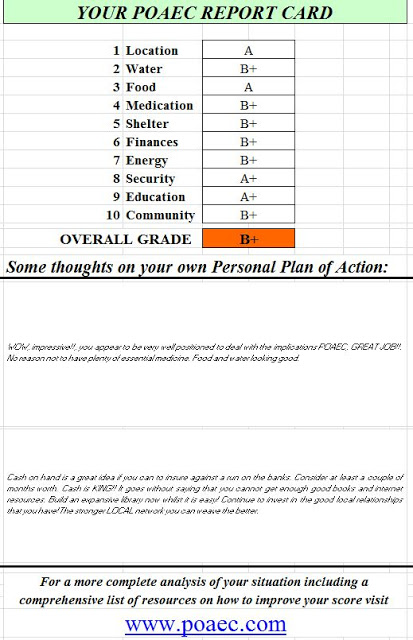 It goes to show that I am not perfect, as we do not have essential medicine on hand for our health issues, or have reliable rainfall in our local area.  Our local community network also has to strengthen before I am comfortable that we are resilient enough.

The only thing I found at fault was the lack of consideration about potential climate change impacts.  I would have asked questions about height above sea level and things like that as well.  It would make it a more rounded test.

So, why don’t you have a go at the spreadsheet (if you can) and let me know your score and potential areas to focus on via a comment?  I think it would be a discussion.  Tag, you’re it!