For those of you who get a break this time of year, I hope you are having a resting or active time, whatever be your fancy.

Having recovered from the unknown ailment, with no sign of shingles for the last four days, I would say that I am out of the woods.  Still taking aspirin as recommended by the GP, but no sign of any of the symptoms that I had on Tuesday.  Fingers crossed.

Speaking of crossed, on Friday, Kim whipped up a batch of home made hot cross buns, which we have been snacking on with herbal tea all weekend.  Here they are all cooling on the rack after Kim glazed them.  The taste of all spice and cinnamon was delicious.  Certainly beats the palm oil tainted buns that the big supermarkets were trying to flog! 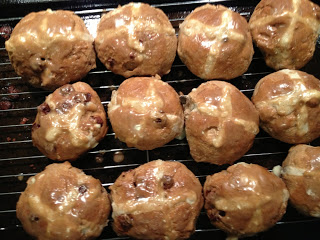 After a solid days work of tidying up on the chook-house and pool parts of  the garden, we had a simple dinner is steamed fish and veggies.  Later, I made mozzarella for the family, who have been eating it as a snack with crackers whenever it takes their fancy. 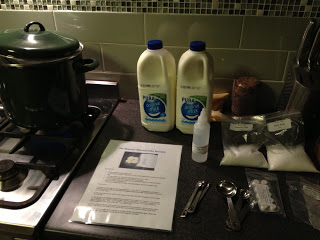 Yesterday, I worked my butt off in the veggie patch.  I managed to harvest the last of the tomatoes, mostly broad ripple yellow current and a few tommy toes.  All the spent vines were composted, and the beds prepared for onions and garlic which I shall be planting tomorrow.  The pumpkins were harvested as well, with only 1 Aussie Butter, 1 Butternut, and 1 Qld Blue to show for all my efforts.  The summer heat was a killer.  There is one more Aussie Butter to be picked, but I am waiting for it to grow a little more. 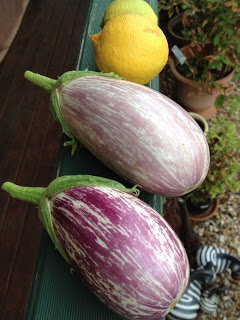 I also harvested these beautiful eggplants (aubergines).  The cultivar is called Listada di Gandia, and I have been saving the seeds for five years now.  It is just a nice as the normal long purple cultivars, but far less susceptible to getting burnt in the extreme heat of summer.

In addition, I pruned the dead branches off the citrus trees, pruned the thornless loganberry, and trimmed and collected seed from the Warragul greens (NZ spinach).

Today, I worked two shifts at the local Bunnings BBQ run by the Melton Sustainable Living Group.  Always good fun, but we didn’t raise as much funds as expected with the takings being over $600 down from normal.  Looks like we will have to write a few grant applications for our projects this year instead of relying on our own fundraising.  Not to worry.  There are lots of organisations who throw grants at groups like ours.

There is a bit more work to do tomorrow afternoon, however we are going to Ballan to visit Jessie who writes at “rabbidlittlehippy“.  Looking forward to the lovely gift of organic chocolate she offered me, and a look at her chooks and ducks!

So far, a very grounding and relaxing weekend.

How about you?  Anything exciting happening in your garden or kitchen?

Thankfully there were no issues in the blood work, so it was either a virus that knocked me for six, or shingles in a few days. Numbness has turned into pain which is to be expected, but no telltale rash as yet.

I rested in bed all day and night yesterday, sleeping for well over 18 hours. Looks like my body was telling me to slow down. Candle burning at both ends will have to cease, and my after hours activities will need to go on the back burner for a week until I am fully rested.

Also, I would like to thank everyone for their heartfelt well wishes and overwhelming support over the last two days. It really helped me fret less.

Anyway, I am on the train now, inching to slowly towards work. I promise you that I will be taking it easy.

Rock on the Easter break for a relaxing long weekend. Some nice easy work in the veggie patch will be good, grounding medicine. 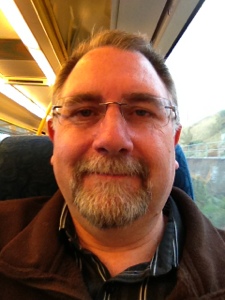 Not a green post at all, but I had to get this down.  I had a bit of a shock to the system today.

I left work early because I was experiencing tingling and numbness on the left hand side of my face, and pain in my left shoulder.  To add to that weirdness, I wasn’t feeling well yesterday afternoon either, feeling faint for about 30 minutes.  However after a drink of water I felt much better.

Called Kim to book an appointment with my regular GP, but he was unavailable, so I managed to get in quickly with an equally nice doctor.  After I told him what was going on, he looked concerned and quickly ordered me to the pathology department to get an ECG and Cardiac enzyme blood tests.

I started to feel a little anxious, because I new that I had symptoms of a stroke.  Yes folks, quite serious.

The ECG was looked okay, however was inconclusive, so they rushed off the blood work to be tested.  I was told that it is probably not a stroke or minor heart attack, and more likely the start of shingles!  But being a cautious doctor, he told me to start taking aspirin to thin the blood.  Wonderful!  Just have to wait for the rash to appear (if it ever does), to get treatment.

So now I rest at home, not doing a heck of a lot, waiting to see him again on Thursday morning for results.  His parting words to me were that if it got worse, call 000 (911).  Nice.

I feel like a bit of a ticking time bomb, sitting here with a numb face feeling sorry for myself.  If you think I feel bad, you can imagine how Kim felt during the whole episode.  Not pretty.

Sorry for bringing you down.