Do you think that the fossil fuel power industry’s days are slowly coming to an end?

Well I hope so, and soon, for the next generations sake.

With countries like Germany, who are setting their sights on becoming fossil fuel free for electricity by 2050, the province of Ontario, Canada set to close down their last coal fired power plant at the end of 2014,  and with wind turbines and thermal solar renewable energy plants accounting for a greater percentage of total electricity generation each progressive year, it looks like coal fired electricity generation is no longer the utility of choice.

Even China are ramping up domestic renewable energy installations, and the Japanese are replacing the lost nuclear capacity at Fukishima with a 1 GW wind farm.

So to rub a little salt into the wound, I found this short video that plots the demise of the fossil fuel industry against Gandhi’s quote (which may have been misattributed to him).  Its only a few minutes long and worth a look although it may not be an accurate trajectory of the reliance of coal, crude oil and natural gas, but it is hopeful.

“First they ignore you. They they laugh at you. Then they fight you. Then you win.”


It is a good message that things are changing.  I’m hoping for a win in all corners of the globe.

If we have any chance of avoiding runaway climate chaos, we as a race really need to ramp up the replacement of all coal fired power plants within a very short time frame.

Maybe Paul Gilding was right when he predicted in his book The Great Disruption, that the Great Awakening (with reference to climate change action) would happen happen around 2018.

All we need is some solid political climate change action in the USA and a big decrease in coal usage world wide, and we could really get somewhere fast.  Lets hope that words are followed by decisive actions.

What do you think?  Are we even close to a win for renewable energy, and the demise of coal as an electricity generation fuel?

A little off the theme of this blog, but many people have emailed me and asked how our archery has been going.  So here is an update:

Early last year, Ben and I decided that Bow Hunting was not for us.

Besides the fact that the entire premise of Bow Hunting is to kill animals for sport (not all bow hunters think like this though), which I didn’t have too much of an issue with as long as the animals were feral, the main reason was that I did not get along with some of the more mature folk.  You know the type.  Set-in-their-ways, anti-environmentalist folk, who made it their mission to be rude to us by slagging off treehuggers and anyone wanting to preserve the planet such as myself.

Anyway, to cut a long story short, I told these mature blokes that I was a greenie, and that I took offence to what they were saying about “my kind” (their words).  A few other members piped up with the same concerns.  However, with a shrug of their shoulders, they ignored me and kept on using the same words.

So, that was that. We left, never to go bow hunting again, as I didn’t want Ben exposed to that sort of attitude.

But the fact remained that we really did enjoy archery.  The feel of the bow in your hand, with the anticipation of nocking the arrow just below the nocking point on the string.  The anticipation of whether you will hit the target or not, or loosing an arrow.  We had a yearning for the thrill of the fletching upon our fingers, and the bruises on our forearms!

We looked around and found that not so far away there was an alternative.  It was the type of archery that you see at the Olympics, with a round target with concentric circles.  It can be either indoor, or outdoor, or field.  We found an indoor range and paid for an hour to see if we could get back into the swing of things.

Well after an hours practice with limited compound bows, we both agreed that we would give it another try.  To our surprise, we could still hit the target.

So we signed up for an OzBow Archery Instruction Program, which consists of six 2 hour lessons.  Our first lesson was last Saturday.

Anyway, the people were nice and friendly, as was our instructor, Irene.  The youngest in the class was a lad of 8 years old, and I believe that I am the oldest, and there were men and women, boys and girls, all in the same class.

We learnt so much in the first hour that we got to shoot and score in the second hour of instruction.  Ben and I proudly qualified for our 10 metre certificate during the first lesson.  Ben scored 176, and I managed to post 188.  We only needed a score of 150 to qualify at that distance!  Chuffed to bits with our achievement, we are now looking forward to next weekends lesson.

Suffice to say that archery is one of the few sports that the entire family can participate in all at the same time.  That is why I like it.  I get to spend time with my son, and a bit of father-son competitive spirit.

Who knows? We may find a bow hunting club is more welcoming later on down the track.  Until such time, we will continue with this form of archery.

I have cobbled together all of my Camembert notes and experience and documented it all in one place. That place is in a post over on my cheese blog titled (naturally) “Camembert“, which is full of white furry, creamy goodness! 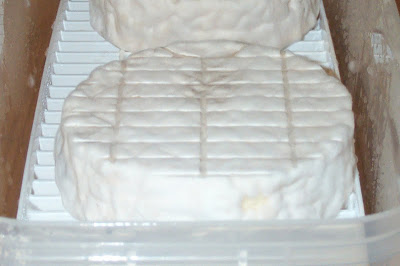