Due to the fungal rust, it was time to harvest this years crop of Broad Beans (Fava).

The beanstalks were starting to look worse for wear, and they really wouldn’t have lasted too much longer. 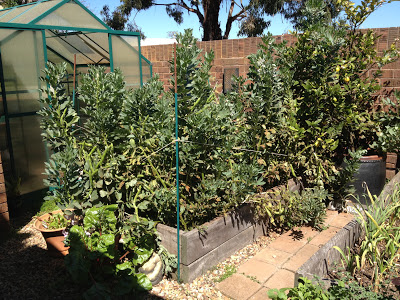 So, before I started, I asked Ben and Kim to come and give me a hand.  They both jumped at the chance (well Kim did), and we got on with the task of cutting down each stalk, carefully leaving the roots intact.  The roots are great organic matter, and also have nitrogen nodules attached that enhance the soil as they rot down.  We threw the beanstalks into the organic waste bin, and composted the pods as they had none of the fungus on them. 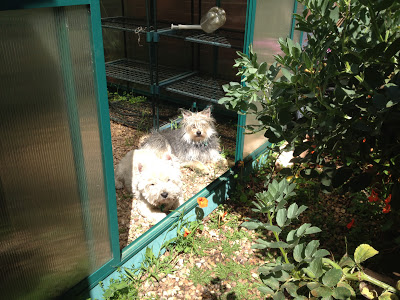 Besides Ben, Kim and I, there were the two supervisors making sure we harvested the beans correctly.  Holly and Teddy also made sure that the greenhouse was warm enough. 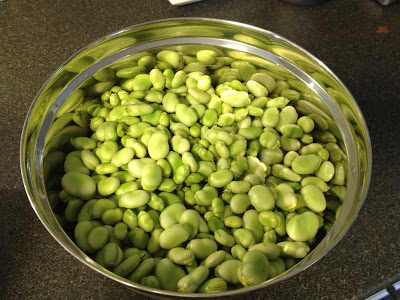 And here is the result.  The beans weighed in at 1.7 kg (3.7 lbs), which is down from the 2.1 kg that I harvested last year.  The rust had something to do with that, as well as the fact that I had to harvest them three weeks earlier this year.  Kim and I sat and shelled the bean, having lots of fun in the process.  There were comments about farmers wives, monotony, then jokes, and laughter.  It is amazing what you can get up to just shelling beans!

I blanched them quickly to lock in the flavour.  You can read about this process in my post “How to Blanch Fresh Produce for Freezing“.  I added a teaspoon of salt per litre (quart) of water to maintain the colour of the beans.  Five bags of beans are now in the freezer mainly for stews during the winter!  Yum.

After blanching, it was time to clean out the two chicken houses.  I took the spent bedding and saved it for use on the garden bed.

To prep this bed for next week’s crop of Sweet Corn, I added four buckets of home made compost, a few handfuls of blood & bone, and a handful of dolomite lime.  I also added a bucket of charcoal that I saved when I cleaned out of the clay oven after last nights pizza dinner.

According to Peter Cundall, the charcoal gives corn a big boost, so I thought I would give it a go this year.  All topped with the chicken bedding laid on about 5 cm (2″) thick as a water retaining mulch. 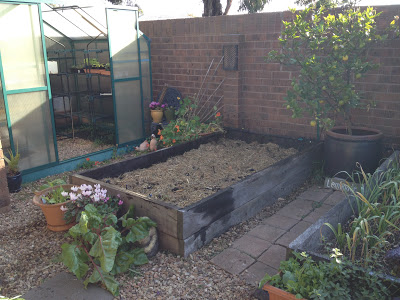 The chooks received the remaining powdered ash in their dust bath.  They thanked me by jumping into it straight away and taking their daily bathe.  They love wood ash mixed with sand.

Once the garden bed was completed, I gave it a good soak from the rainwater tank, and then poured myself a nice glass of Pinot Noir and took in the ambience.

It was pleasurable to be able to look out over the veggie patch, and know that there was nothing left to do for the weekend.

A great day.  Did anyone else get much done around the garden this weekend?