Let me introduce you to a concept that some may not have heard about.  It is the concept of  degrowth. 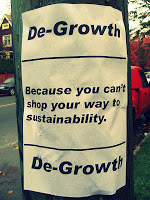 Wikipedia lists the following about degrowth:

“Degrowth (in French: décroissance, in Spanish: decrecimiento, in Italian: decrescita) is a political, economic, and social movement based on Ecological economics, anti-consumerist and anti-capitalist ideas. Degrowth thinkers and activists advocate for the downscaling of production and consumption—the contraction of economies—as overconsumption lies at the root of long term environmental issues and social inequalities. Key to the concept of degrowth is that reducing consumption does not require individual martyring and a decrease in well-being. Rather, ‘degrowthists’ aim to maximize happiness and well-being through non-consumptive means—sharing work, consuming less, while devoting more time to art, music, family, culture and community.”

Sound familiar?  It is comparable to Simple Living, Voluntary Simplicity, Downshifting, Sustainable Living or even the Transition Town movements.
What ever name we give it, why do I think we need these movements?  Well, quite simply, because we live on a finite world that has limits and boundaries, therefore continues growth is not feasible.  Ergo our western lifestyle is unsustainable.
The planet can regenerate about 2.1 global hectares per person per year on a sustainable basis.  The average Australian has an ecological footprint of 6.6 global hectares per person which is 2.8 times the average global footprint of 2.7 global hectares.  If everyone lived like this we would need four planets to sustain our lifestyle.  As there are no new planets to plunder except the one we have, we better get used to living within our means or suffer the consequences.
This means that a possible solution could be degrowth, or put in my language, to consciously reduce our  consumption.
It would be nice if ‘Buy Nothing Day’ was everyday, and we just reused and produced stuff we grew or made ourselves.  Great stuff in theory, but it would kill our current economic model.  However if you look at it closely, our current economic model is killing itself pretty much on its own because of the finite limits of our world.
So, the more we walk away from the current economic system, the quicker it fails, which would not be good for anyone.  How do we aim for a gentle landing and not end up in a continuous downward recession/depression cycle when our economic system does fail?  This is not a rhetorical question.  I just don’t know the answer.
However, I do know that we have three possible paths that we can take from this time on.  Woody Allen once said “We have arrived at a decisive fork in the road. One path leads us to the extinction of our species and the other leads to despair.  I hope we will be able to make the right choice… “
So far, as I see it we are on the first path, taking down many other species with it.  Second path is one of negative growth history has shown to generate famine, wars, pandemics and can lead to a society controlled by fascism or totalitarian power.  No thank you very much!  I am a bit more optimistic and believe we can turn it around.
I believe there is a third path.  It one of degrowth by choosing sobriety and taking stock of our current reality.  We need to break our addiction to things.  Somehow we need to be able to change our economic system in such a way that reduced consumerism is seen as goodness and a better way of living, giving us more spare time, and wanting for less, therefore softening the impact.  We need to live within the global limits and on or below those 2.1 global hectares we each have been granted by Gaia.  It may seem very neo-hippy of me, but there has to be a better path than we one we are current embarked upon.
I for one have chosen not to be on this train wreck any more.  Have you?
Do you have any thoughts on possible solutions to the end of growth?
-37.6777778144.5686375