Do you ever have the feeling sometimes that you are not doing enough to green up your life, even though in reality, you are probably well ahead of the pack regarding living lighter on the planet? When do you know how much voluntary simplicity is enough?

Well Ghandi put it best when he said “Live simply so that others may simply live.” There is never enough people in western society living a simple lifestyle as far as I am concerned.  I believe that greening, sustainable living, voluntary simplicity, simple living, frugality, is all the same thing in my view.  Good for us, and our home, the Earth and its non-human inhabitants.

However, by just looking around at our consumer culture and the pressure that it exerts on the majority of it’s followers, one could have thrown in the towel long ago, thought “Bugger this for a joke” and joined back in with the rest of the zombies.  That would be choosing the path of less resistance, the easy way out, and if the Borg are anything to go by we all know that “Resistance IS Futile”.

Maybe my family and I are just stubborn, or the simple fact of the matter is that turning back to our old behaviours is no longer a moral option knowing what we know about the state of things.  It is not an economically viable one either if we want to preserve the remaining resources.  We can’t live like we have two more planets in reserve forever.  The western way of life is unsustainable.

So why is western society acting like a pack of lemmings racing towards, and then jumping off a cliff?  Does everyone keep-on-keeping-on because everyone else is doing it? 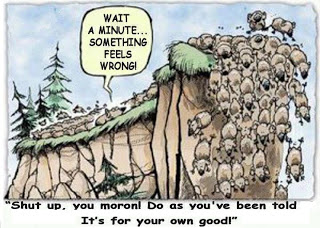 When I ask this question to myself, I reflect back to my childhood to a certain incident when I got into trouble with my parents for being gullible and easily led astray by a naughty friend.  Here is what happened all those years ago.

I followed my naughty friend’s lead, and stole some flavoured milk out of a cold room located on our dairy farm, knowing too well that it was the wrong thing to do.  Once caught, then questioned by my parents as to why I would do such a thing, I said “Andrew did it first, so I copied him”, to which they both replied, “If Andrew Bradley jumped off a cliff, would you?”.  At that young age I didn’t know what a rhetorical question was, so I answered “No, off course not”.  So why did I steal the milk?  The answer was because someone else did it first.

After a slap across the behind, which I admit was well deserved (chocolate milk cost money that we just didn’t have), I was told not to do what naughty Andrew did ever again, and I didn’t.  This was in effect being told not to succumb to peer group pressure.

If you extrapolate that hard earned lesson out to a societal level, then the question we should be asking ourselves is not am I doing enough, but one of, “If everyone else in the consumer society living in the industrial civilization keeps jumping off a cliff, should you?”  Do we really need to keep following the rest of the lemmings off the cliff into the ocean, only to swim to exhaustion and drown?

Well my answer to myself was a resounding “NO!”  I knew that to get off the wheel in the rat race was going to be difficult, however I knew that it had to be done.  Enough was enough, in the consumption sense anyway, and if I didn’t wake up when I did, it wasn’t going to be pretty financially.

A year into my family’s greening, and after the main capital expenditure of the solar PV, we decided that we would drastically reduce our expenditure because it was the right thing to do for us.  We chose to pay down accumulated debt, instead of throwing ourselves off the consumer culture cliff, with an end result of living lighter on the planet.

By then, we had established the means in which to become a little less reliant on the industrial complex for everyday things like food, water, entertainment, and meaning.  It felt good to be in control of our own destiny, which is a difficult task to achieve within the boundaries of our time.  I liken our journey to a single, determined lemming deciding that the fate at the bottom of the cliff was not for him and he stands fast instead.  The pressure of the other rodents still heading over the edge was taxing and relentless, but the little lemming inched himself away from the cliff face slowly each day.

And this, dear reader, is where I am now.  Still slowly moving away from the edge, sometimes being pushed a little the wrong way, but always focused on the ultimate goal of turning the tide and attempting to convince his fellow lemmings to stop, think, and turn around.  All in the effort to live simply so that others (human and non-human) may simply live.

I cannot think of a better reason for bucking against the norm.  Can you?