It felt so good today, finally getting into the garden.  It must have been about two weeks since we have had a sunny day on a weekend, without rain to interrupt work.

We had a fair bit of work to do, so we got cracking. 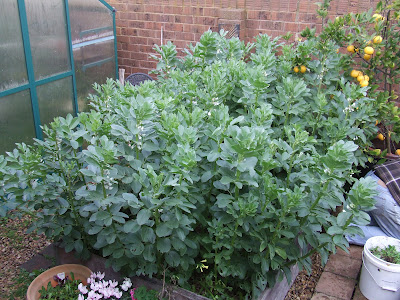 Firstly it was a quick check on the broad beans (fava), and they seam to be growing fine.  There were a few weeds, which were a little hard to get to.  The Lemonade tree in the background is full of fruit.  It is a cross between a lemon and a Mandrin, and you can eat it straight from the tree. 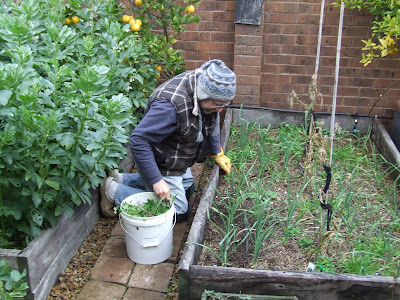 Then it was on to the garlic patch.  This had quite a few weeds, so I set about removing them.  I had to really rug up, as it was about 8 degrees C.  The garlic is strong and healthy, and once all the weeds were removed, I scattered some blood and bone throughout the bed to give them a boost. 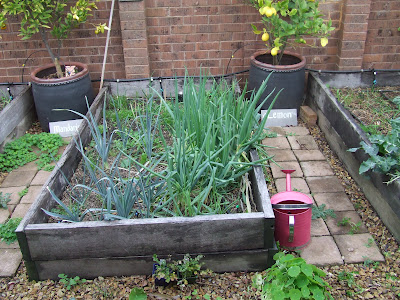 The next bed has leeks, spring onions and brown onions planted in it.  The leeks are nearly ready for harvest in the next few weeks.  Looking forward to some Leek and Potato soup!  There were only a few weeds, and it didn’t take long to sort it out.  The Mandarin and Meyer Lemon tree are also laden with fruit. 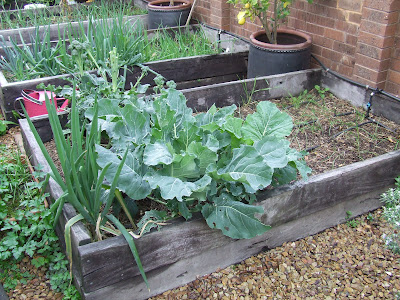 I noticed this year that if I planted broccoli and cabbages near onions, there were a lot less cabbage moth caterpillars on those vegetables.  So I planted even more brown onions to keep the grubs off the brassicas. 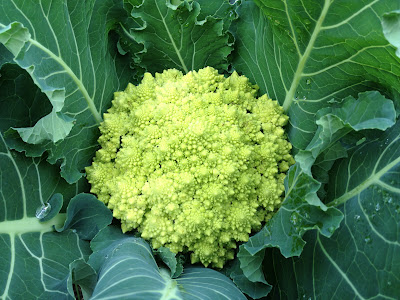 Look at this Romanesco broccoli!  Sometimes know as Roman cauliflower, it is an edible flower of the species Brassica, and is a variant form of cauliflower.  What a fine specimen.  The head is about the size of my hand, and is nearly ready to pick and eat.  Such a beautiful lime colour. 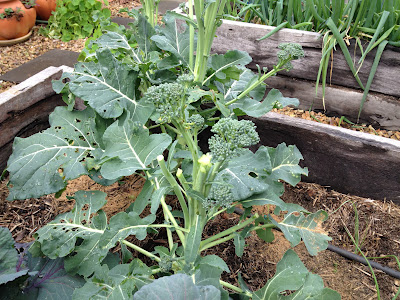 Here is a sprouting broccoli that we have already started to harvest.  This has been the best year for broccoli, mainly because I choose heirloom varieties, and the cabbage moths have not been too bad.  It just goes to show that companion planting work well, and the onion smell must put the moths off laying.  There will be more heads off these two plants to harvest in the next few weeks.  Kim makes the best cauliflower and broccoli cheese bake.  Yum. 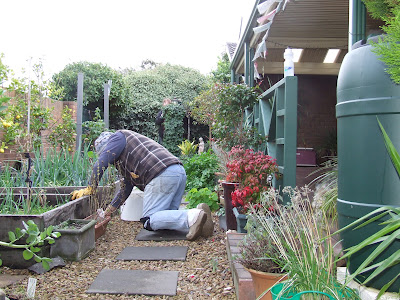 Moving up the path as I weeded, my objective was to tidy up all of the beds and the paths so that it was ready in preparation for Sustainable House Day.  Can you see Kim?  She is hiding.

SHD 2012 is being held on Sunday, 9th September, and for the third year our gardens will be open to the public.  We are both looking forward to it, as it is a really great day. 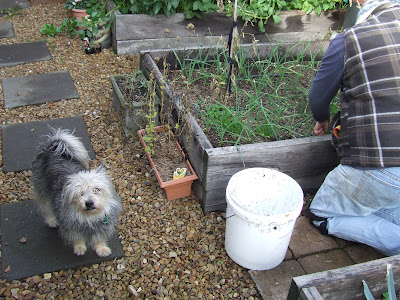 Holly was helping me along the way.  She is a lovely little dog, and follows me everywhere when I am gardening. 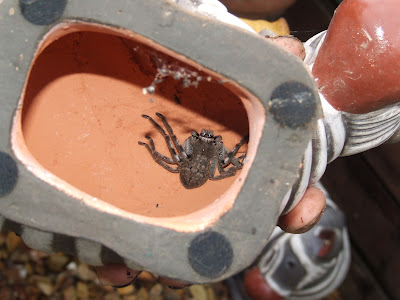 As Kim was moving some ornaments around, we found this Huntsman spider (non-poisonous) hiding in a clay zebra.  Ben was shaking when he took this photo! 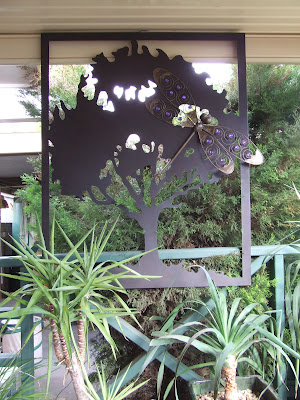 After the garden was finished, we trimmed back the fir tree that was shading the solar panels, and cut out some dead wood.  Because the tree looked a bit bare, Kim decided to disguise our handiwork with an metal tree.  A bit of irony there, but it did look nice.  The metal tree was given to Kim as a birthday gift, so I helped her hang it, and moved some Yucca’s and Dragon trees in front to give it a bit more depth. 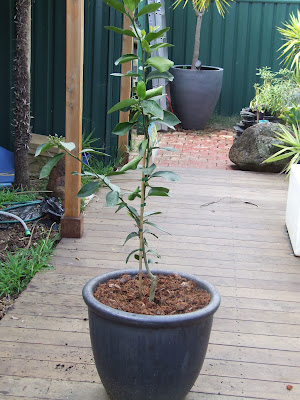 Once we had finally finished in the main veggie patch, it was time to move into the pool area.  I planted another Meyer Lemon tree, that had dwarf root stock.  This should flourish in this area, as are all the other citrus trees we have in pots around the yard.  This takes our citrus tree count to nine. 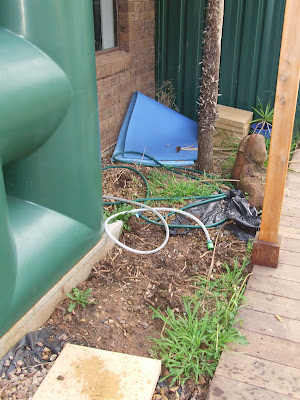 I then had to tackle this lot, but before I did, I needed to make some planter boxes for the three remaining grape vines that I will plant tomorrow.  I tidied up the area, weeded in preparation to plant the vines, and landscape with large river pebbles. 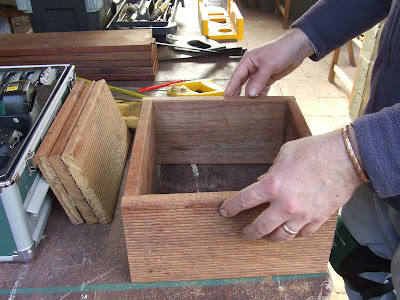 Here is the first small planter.  It is made from left over decking wood in a simple box shape and is 300 x 300 mm (1ft x 1ft).  It will protect the grape vines whilst they are small.  I made two this size, then another that was 1.8 metres (6ft) to put in front of the rainwater tank.  I will then make a trellis out of chicken wire to put in front of the water tank, so that we can grow passion fruit. 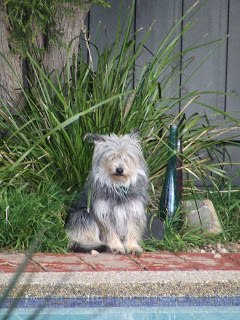 Finally, as we called it a day Holly decided to catch a few rays.  I think she was pretending to be a statue on the far side of the pool.

We had a great day, and called it quits after about six hours of work.  It was good to ground myself in the soil.  Connecting with the Earth really takes all the stress of modern life away!

Who else loves to potter around in their edible garden?  What successes have you had this season?