Saturday night was a hoot!  It had been about a year since we started making our clay cob oven!  I still remember laying the first brick for the base, and once it was down there was no turning back.
About six months ago, Kim and I were putting together the half year schedule for the Melton Sustainable Living Group and decided to include a Pizza Oven Party.  Many of the group members attended a workshop that I ran where they got some hands on experience and helped stomp the clay, sand and straw for the first of the five layers of cob that we applied to the oven.
You can see how we all contributed in my youtube video titled “The Ultimate Clay Cob Oven Video“.
So now it was payback time for lending us a hand.  The invitations were sent out and many accepted.  Here is what the layout looked like. 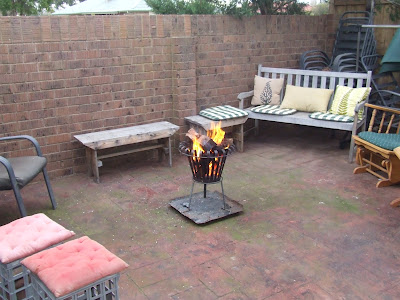 It was very cold, so we asked everyone to rug up.  I had chopped some wood that I had stored, and lit a brazier in a clear area so those who were so inclined could sit around it to keep warm. 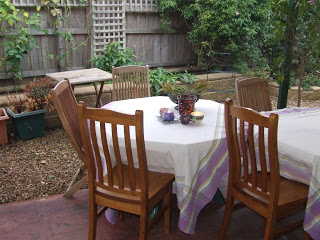 We set up lots of tables, because we had RSVP’s from 26 people, so it turned out that we could just fit them in undercover in case it rained. Kim was after a cafe look, which I think she pulled off.  Everyone loved the set-up. 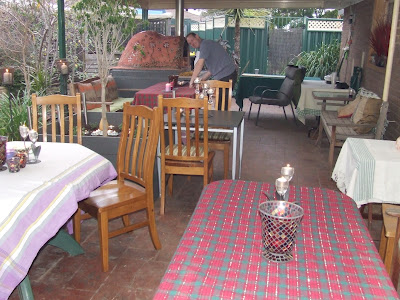 This picture is looking down towards the oven, and my friend David helping out with maintaining the fire in the oven.  We lit the oven at 2.30pm for a 3 hour burn to ensure that the oven was saturated with heat for the entire evening. 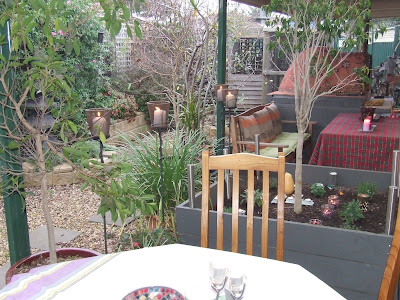 We found some very old candle holders, and some large pillar candles that made the area look special.  After a clean they were as good as new. 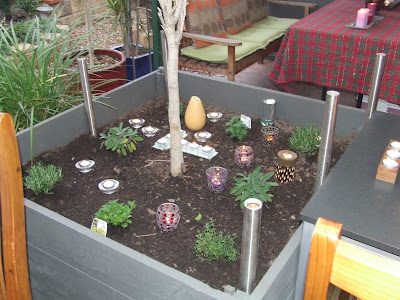 Kim put tealight candles in the pizza herb garden, and when it was dark it lit up and looked wonderful. 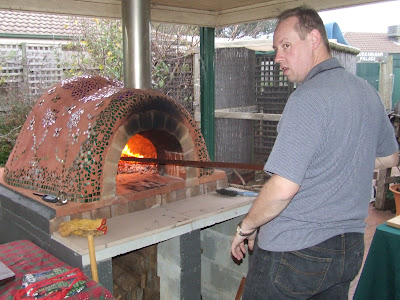 David was about an hour into the burn at this stage, making sure the fire was not too powerful and  raging up the flue.  He did a great job at keeping the fire just right. 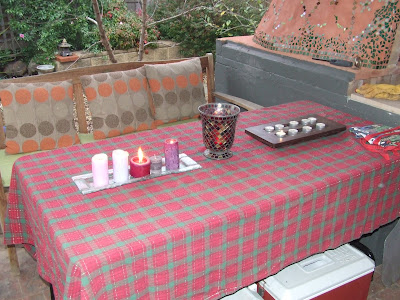 Here is the drinks table right next to the oven.  The base doesn’t get hot, however later in the night, the outside of the oven heats up to about 50C, so it is a nice warm position after sunset. 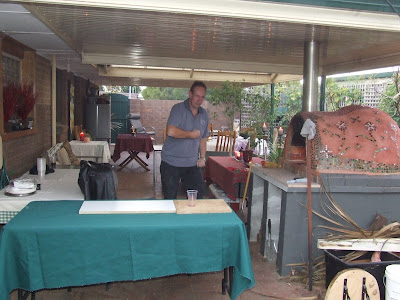 The tables are all set up for an efficient operation.  Each person bought their own freshly made pizza’s, some homemade from scratch, some store bought pizza bases with extra toppings, but all looked excellent.  I put some cutting boards which were just scraps of laminated wood so I could put the hot pizza’s straight on without making a mess.  Each person cut their own pizza and served themselves once I let them know their meal was ready.

David was very excited and getting into the festivities early.  Whilst he was maintaining the fire, I was inside giving Kim a hand with preparing all of our food. 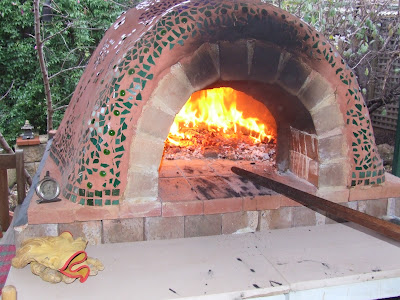 Nice and hot, with about an hour to go before the guests arrived.  As it was getting dark, around 4.30pm, the first guest arrived and the party got going.  Lots of laughs. 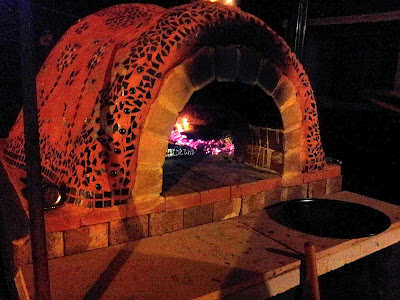 No further pictures, however here is one of the oven in action that one of the guests took.  Once the 3 hours had elapsed, I pushed the coals to each side and tested the temperature with our Infra-red Thermometer.  The walls were 627°C (1160.6°F),  and the oven floor was ~400°C (750°F).  I let it cool down for 15 minutes before we cooked the first pizza.  When cooking, I wore a ball cap that has LED lights in the brim, so I can see into the oven to ensure the pizza was browning on top.    The first pizza took about 3 minutes to cook, and the last took 10 minutes.  All infused with that lovely smoky flavour that one only gets from this type of oven.

Once sufficiently brown on top, I then removed the pizza from the tray, popped it on the peel (paddle) and browned the bottom of the pizza on the floor of the oven.  Every meal turned out well, and the final count was 21 pizzas, 8 jacket potatoes, and 3 garlic breads!

One thing that I learnt was to keep the oven at cooking temperature (above 250°C) by putting a few small logs either side on top of the coals every 15 minutes or so.  Not too much flame, just enough to make fresh coals.

When all of the cooking was finished I declared the kitchen closed, and sat around the brazier for the evening.  Besides the cooking, which I really enjoyed, the highlight of the night was Kim’s sing-along.  She had prepared a song list that included old favourites such as Country Roads by John Denver, I’ll Be There For You by the Rembrandts, and my favourite Delilah by Tom Jones.  Kim played her guitar so well that it was very easy to follow along and many were singing all the lyrics.  So cool, and it made the evening come alive.

What a great way to thank friends and members of the group for helping us to make the oven.  A great celebration!