Time for a giveaway to say thanks to all readers of this blog.

In fact, as chance would have it, I have two items to send two lucky winners.

The first prize is a never-been-read novel called “ECOTOPIA” by Ernest Callenbach, who I wrote about in this post titled “One Finger Cannot Lift A Pebble“.  The online book company sent me two copies by mistake and only charge me for one, so I am giving away the second copy.  My copy has been read twice, which shows how much I liked it! 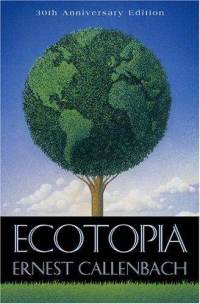 The synopsis of the book is as follows;

Ecotopia was founded when northern California, Oregon, and Washington seceded from the Union to create a “stable-state” ecosystem: the perfect balance between human beings and the environment. Now, twenty years later, the isolated, mysterious Ecotopia welcomes its first officially sanctioned American visitor: New York Times-Post reporter Will Weston. Like a modern Gulliver, the skeptical Weston is by turns impressed, horrified, and overwhelmed by Ecotopia’s strange practices: employee ownership of farms and businesses, the twenty-hour work week, the fanatical elimination of pollution, mini-cities that defeat overcrowding, devotion to trees bordering on worship, a woman-dominated government, and bloody, ritual war games. Bombarded by innovative, unsettling ideas, set afire by a relationship with a sexually forthright Ecotopian woman, Weston’s conflict of values intensifies-and leads to a startling climax.

I found the book enthralling, brilliantly written, and a page turner.   The story is timeless, and I could envisage this as the present day even though it was first published in 1975!

The second prize is a DVD titled “The Corporation”.  It plays in all regions and has been kindly donated by Jason Dingley who writes over at “Zucchini Island“.  It is a proper retail version. 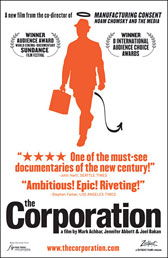 The synopsis is as follows;

Since the late 18th century American legal decision that the business corporation organizational model is legally a person, it has become a dominant economic, political and social force around the globe. This film takes an in-depth psychological examination of the organization model through various case studies. What the study illustrates is that in the its behaviour, this type of “person” typically acts like a dangerously destructive psychopath without conscience. Furthermore, we see the profound threat this psychopath has for our world and our future, but also how the people with courage, intelligence and determination can do to stop it.

I watched this documentary a few years ago as part of my greening, and learnt so much about how companies are not what we think they are.  Well worth entering just for this DVD.

So what do you have to do to win?  Well, all I ask is that you either follow the blog (button on right hand sidebar), or like the Facebook page of this blog (or via the popup bar at the bottom of the blog) or subscribe via email (see right side bar) or subscribe to the RSS feed.  Then come back here to this post and leave a comment saying that you want to be in the draw for the prizes and how you subscribed.

I will post the prizes anywhere in the world free of charge, and will draw the giveaway on Sunday, 24th June 2012, using a random number generator coinciding with the comment number.

So if you have been lurking for a while, don’t be shy, and try your luck.  As I receive over 500 visits a day, there must be a few of you I don’t know yet :-).  By the way, if you are a regular reader/commenter, you can still enter as well!

If you don’t have a Google account, that is fine, just use the Name/URL option, and just fill in you first name, as the URL part as it is not necessary.  No anonymous entries will be considered.

Once the two winners are announced on Sunday, just send me an email to confirm address details.

May the best person win, and good luck!