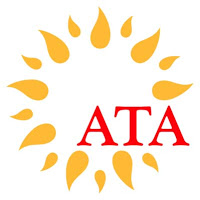 Last night I had the pleasure of attending a function held by the Alternative Technology Association.  The ATA is Australia’s leading not-for-profit organisation that promotes sustainable technology and behaviours to ordinary householders. The ATA provides services to members who are actively walking the talk in their own homes by using good building design, conserving water and using renewable energy.  All plugs aside, it was a ‘Thank You’ for their business partners and supporters and was well attended.

Suffice to say it was a great evening, and I met the CEO, Ian Porter, and lots of very interesting people, some of who commented that they regularly read this blog (hello to you all).  Some wanted to know about the inner workings of a blog (the technical aspects), and others just wanted to talk about gardening and what was best to plant in our region at this time of the year.

Besides all of the networking, there was also a guest speaker, Professor Rob Adams, Director City Design at the City of Melbourne.  His presentation was about  “A Vision of Melbourne as a Sustainable City”.   Prof. Adams was quite visionary.  Being the Director of City design, he has been able to influence the fabric of the cityscape.  He talked about walkable neighbourhoods, curbing suburban sprawl, increasing population density near tram lines, increase of proper bicycle lanes that are shielded from traffic, increase of public space, increase of trees, increase of water efficiency, many of which have been implemented.  He did mention that there is always room for improvement, and that there are new projects under way in conjunction with partners like increasing water storage in parks and gardens, so that they become almost self sufficient.

The most impressive part of the presentation was what he thinks we should do with the suburbs.  His recommendation is to curb suburban sprawl by increasing inner city density to about 300 people per hectare, and make them the lungs, distributed energy producers, and food bowl of the city, something that I am totally on board with and which I actively participate.  The plan is to attempt to reverse the Victorian State Governments current thinking around building into the green wedges of the city, and leave the suburbs as they are.  I love this plan.

Increasing urban density up to 8 stories high along the tram corridors is achievable, in fact around the city it is already happening.  It is far cheaper in infrastructure costs to increase density in the inner city than to let sprawl continue.  All of the infrastructure is in place, and can be augmented to cope, without too much effort or cost.  Increasing density alongside well provisioned public transport has been proven to reduce car ownership, which in turn decreases traffic congestion and greenhouse gas emissions.

Also, I found out that the city of Melbourne has a congestion levy.  It places a levy on each privately owned car park space ($910 per space in 2012) which goes into a fund with which the city uses to fund tram super stops and bike lanes, and other sustainability projects.  That was something I didn’t know the city implemented, but I don’t live there so it goes to reason.  They have designed it without the hassle of a park and pay version in places like London.

Prof. Adams presented evidence that people around the urban fringe in the outer suburbs are actually a lot less healthier due to inadequate public transportation.  Reasoning is that if you catch public transport you are more likely to walk to it, exercising an average of 40 minutes a day, however if you drive to your workplace you would be lucky to exercise for just 10 minutes a day.  I know this to be factual because as I found out when I rarely drive the 50km to work, I hardly get any exercise those days, and have to compensate with a long lunch-time walk.  For more information about the drawbacks of living in outer suburbs and working in a city, take the time to read this study titled “Unsettling Suburbia: The New Landscape of Oil and Mortgage Vulnerability in Australian Cities” by Griffith University.  The university created the VAMPIRE (Vulnerability Assessment for Mortgage, Petroleum and Inflation Risks and Expenses) index which identifies the relative degree of socio-economic stress in suburbs in Brisbane, Sydney, Melbourne, Adelaide and Perth.  You can get a copy of the report at this link.

Another factoid I learnt was that 20% of the cities trees have died in the past decade due to climate change and the 11 year drought we just experienced, with another 20% of the trees expected to die by 2020.  They are replanting with native species, as most of the dead trees were non-native European species such as Dutch Elm, and Oak planted many years ago in the early 20th century.  Prof Adams mentioned that they have begun to install water traps near curb side tree plantings that help to water the trees from storm water runoff.  A great idea to water them and to reduce runoff into Port Philip Bay.

These were the only bits I remember, however it has given me a fantastic idea.  Over the weekend, I am going to document my vision of my town of Melton becomes in 2030!  I have a fair idea what needs to be done around here to make it sustainable, adaptable and resilient, and will even include a map or two so those not familiar with the area will have some idea of what I am banging on about.  Like last night, it should be fun.

In closing, a big thank you goes out to those hard working people at the ATA who made the night so special.

What is your city/town doing to become more sustainable?  I would love to know, as would all of the readership.  Leave a comment if you know of great projects happening in your area.