Have you ever completed a project and had an overwhelming sense of pride?  Well I did yesterday afternoon, when I flicked the switch on my stand alone Solar PV system and watched as it all came together for the first time.  It took me a few hours to put all of the wiring together, testing every component with my multi-meter, and ensuring everything was insulated. 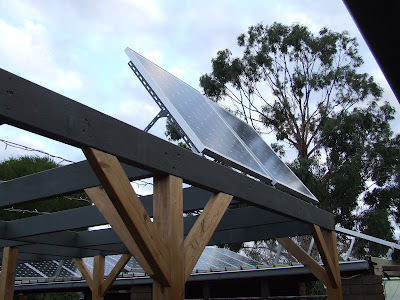 So, allow me to walk you through what I have done.  In the previous post I hooked up the two 110 watt solar panels via a frame, connected them in parallel, and ran the cables into the carport. 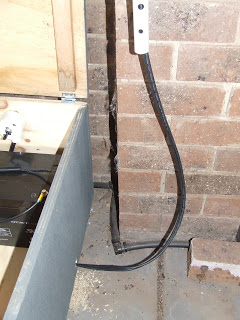 I ran out of conduit, so the last meter is uncovered and feed into the battery box. 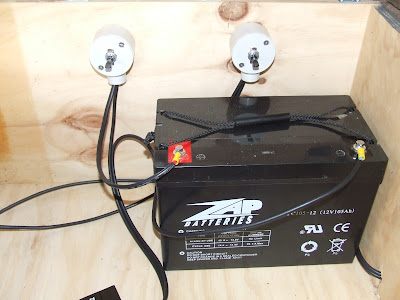 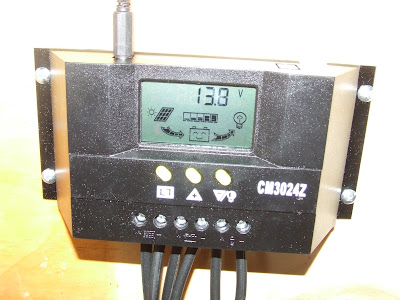 Here is the charge controller display showing the float charge voltage of 13.8v because the battery is full, and that there is input from the solar panels (left arrow) and load being drawn (right arrow to light bulb).  The battery is fully charged as indicated by the little smiley face battery and the gauge above it.  You actually don’t have to set anything on the charge controller, as everything is done for you in the factory.  It is a very clever little device.  You just have to make sure that you have the correct polarity when connecting the individual components. 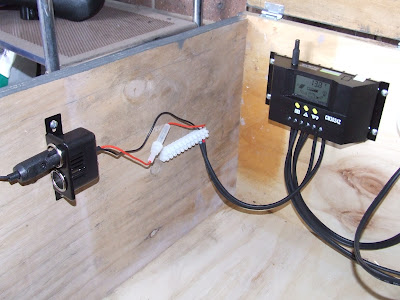 For the start of my 12 volts system, I connected the load from the charge controller and wired it to a terminal strip, and then to a dual outlet 12 volt accessories socket.  I can now plug in anything that you can use in a car like a small compressor, lighting, phone chargers, small fridge, etc. 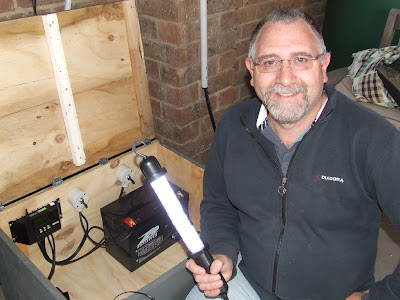 Here is me, proud as punch that I actually got it all to work, with the first appliance connected to the system.  It is a 30 LED, 4 watt light strip which I plugged into the car accessory socket. 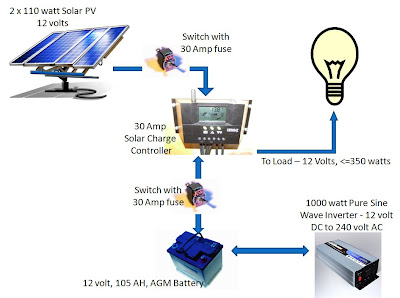 For those who want to see a bit more detail and a sort of schematic diagram, here is a slide that I whipped up in PowerPoint that shows the current flow.  Note that I added a 12v DC to 240v AC inverter into the diagram.  That is because I found a few bucks and bought one off of the Deals Direct website. 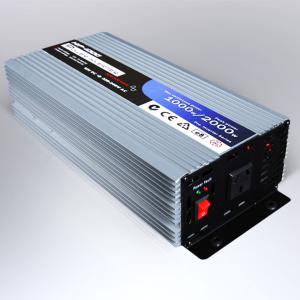 It is a pure sine wave inverter, which produces a clean power stream, unlike the cheap and nasty modified sine wave (technically known as a square wave inverter) that are also on the market.  It should arrive in a few days, and I will connect it up to the system and hook it to a small 4 socket power board and mount it on the outside of the battery box.  Once connected, I will be able to use normal household appliances up to a total load of 1000 watts.  If I run it at full load, I would only expect the battery to last for just under an hour, however if I use it wisely, it would last all day until the solar panels recharge the system in a day.  I am saving up for a second battery that I will be wiring in parallel to double the storage capacity to 210 amp hours.

Whilst I was looking around the Deals Direct website (which my Dad put me onto), I found an appropriate 12 volt, 40psi, water pump for my drip irrigation system.  It will finally increase the pressure and I will not ever have to use mains water to irrigate the veggie patch again.  The 4000 litres of water storage that I have should be able to keep my garden sufficiently moist the whole year round. 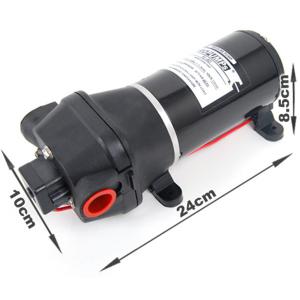 For an independent power supply, I definitely believe that it was worth the money.  I feel good knowing that during a blackout, I can still run a few electrical items for a while.  Time will tell just how long long the 105 AH battery will last under load, but like I mentioned before, if used wisely, it will last until the next sunny day!  Once I get some stats, I will post about what sort of life you can expect from the batteries and how long it takes to charge from the panels.

So, early this morning, with a cup of coffee in hand, I opened the lid of the battery box and just watched the solar controller display for about 30 minutes, and felt a sense accomplishment and of ‘a job well done’.   A very satisfying feeling indeed.