What do you do when you have a few of these red chillies left over from preserving? 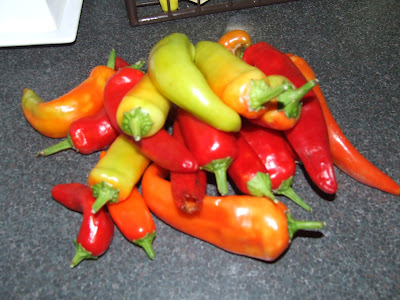 Well you make some chilli jam of course!

Kim found a recipe that she really wanted to try out, and being her first time at preserving, I assisted and coached her through the process.

Firstly we visited the local green grocer and bought up 2kg (4.4lbs) of ripe tomatoes.  I cored them all, put them in a large bowl and poured boiling water all over the top so the skins would come off more easily. 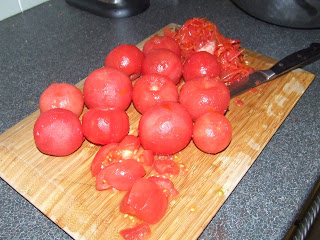 Once you have peeled the skins off you then chop the tomatoes roughly and place them in a big bowl. 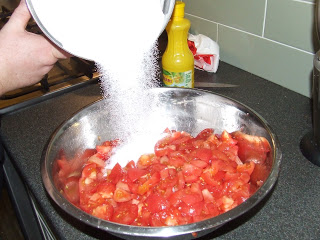 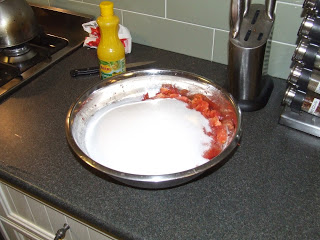 Then you give it a big stir, then cover and leave overnight in the fridge or cold place.

Now, as Kim was in charge of the jam making, and as it was her first time, she forgot to take any more pictures due to all the excitement.  A bit of a shame, but I will just have to describe the rest of the process in words.

The next day, she chopped up 12 long red chillies and left the seeds in a few for a bit of bite, then transferred the tomato and sugar mixture to a large pan.  She added the chillies, 6 tablespoons of lemon juice, 2/3 cup of white wine vinegar, 4 teaspoons of sea salt, 4 teaspoons of fish sauce and brought it to the boil and stirred the jam occasionally.  After reducing the heat and simmering for about 2 hours, she thought that it was thick enough.  Just so you know, I was at work, and fielded at least three jam making questions via the phone to help her along!  If you want to make less, then simply halve the recipe. 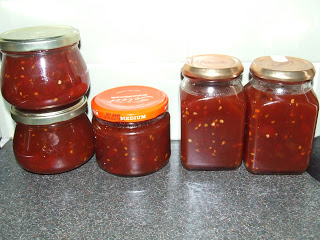 To finish it off, she sterilised some jars in the hottest wash in the dishwasher, and made sure that the lids were spotless.  The hot jam is poured into the hot jars, and sealed tight.  Make sure that the little button pops, and those that do not, place in the fridge and use first.  Makes about 5 medium jars.

All of the lids popped on ours, and there was little left over so Kim put it in a ramekin and we had a little with Feta and crackers after dinner last night.

I must say that for her first try at jam making, Kim is a natural.  The taste is fantastic, and it has a great savoury taste with a bit of a kick.  I smothered two veggie pies that Kim made in it and ate them for lunch.

So, if you have a glut of red chillies, you could do no better than giving this recipe a try.  It is well worth the effort, and I dare say that it goes with most roasted meats and any type of veggie dishes. From experience it was delicious with my home made Feta!