Kim and I had the pleasure of meeting and getting to know a lovely young couple over the last two days.

Greg and Sophie are on their way around Australia in search of interesting people who live simple lives as material for a book.  Greg had organised this visit months ago, well before the recent media frenzy that I will write about during the week.  I will let Greg explain about their trip it a bit better with an email he sent me.

“Hi Everyone,
If you’ve received this email, you’ll know about my plan to cycle up Australia researching a book on simple living. In fact, you might have suggested someone to profile, helped with the proposal, built the website, taken photos, or agreed to be interviewed. If so, thanks for your support.
I thought I’d let you know how things are progressing. So far, I’ve completed a sample chapter based on a tour of the ultimate self-sufficient house and handed it into the publisher…who was encouraging, but wants to see more before making a commitment. I’m resubmitting the book proposal in June, after completing the first leg of the trip.
Meanwhile, you can follow the journey at www.simplelives.com.au, which features a chronological blog, an itinerary with calendar, a map of the route we’ve taken so far and profiles of people we’ve met along the way. Each week I’ll post a new profile and descriptions of the journey, so there’ll be plenty of material for regular readers. (And because this is the internet, the site also features some gratuitous nudity.)
Please share the site with any friends who might be interested – a decent blog readership will be a big help in convincing the publisher to sign up the book, not to mention spreading the sustainability message to a broader audience.

Because this is now a self-funded trip, I’m also looking for sponsors or partners that share similar ethical values. If you know of a suitable organisation, please get in touch.
Again, thanks for your help, and I look forward to meeting some of you on the road.
Regards,
Greg Foyster
Freelance Writer”

They were meant to turn up today at 0930, however as they decided to leave Melbourne yesterday and arrived in Melton late yesterday afternoon.  They popped in for a visit to ask if there was a camping ground in our town.  Well, like most suburbs the answer was no, and unfortunately we had no grass for them to pitch their tent on.  So like a couple of lost puppies, Kim took them in, gave them the spare room and offered them a warm shower, dinner, and a comfortable bed.  It was the least we could do after their long ride from the city.

When I got home from work to find two semi-strangers taking showers, I did what any ordinary bloke who had a green epiphany would do, and that was to take them on a tour of the extensive grounds (xD) and showed them all of the things we have done to the place.  Whilst I was doing this, Kim was making vegetarian pizza, and heating up some of her weekly batch of veggie soup to share at dinner.  After a hearty meal, we talked and talked and talked over a couple of bottles of red wine that I dug out of the stockpile cupboard.  It was so nice to meet like minded people.

So after a good nights sleep, I went to the gym (exercise rehab for the back), then we made a breakfast of boiled eggs and toast with cherry and plum jams.  Hopefully Greg will write the story about “Mastery of the Egg” on his blog, as it was hilarious watching a grown man tackle the task of cutting open a very hot, hard boiled egg.  We had a good laugh.

Then as part of the interview for his book and or blog, I showed them how to make Feta cheese.  As there are some quite long waiting times during culturing and renneting, we had a more formal interview in my blog cave.  It was great.  We must have talked for about 3 hours in between checking on the progress of the cheese.

All too soon it was time for them to leave as they were travelling to Leopold, just south of Geelong, with a stop over at Lara overnight as a rest.

Here they are in their gear ready for the next leg of the trip.  They were carrying a tent, camp stove, food, clothing, and I think the kitchen sink was in there somewhere! 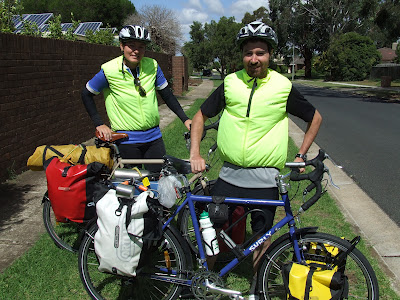 There they go, down our street, off into the distance. 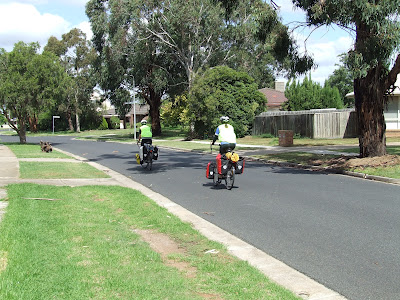 I hope our paths cross again!

So if you are into simple living in whatever form you think that is, drop Greg a line (he has a tablet with 3G broadband) and invite them over to document how you live lightly on the planet.  They are really nice people, and I reckon that these Greg and Sophie will make a big difference to the way people see the way we live a simpler and sustainable lifestyle.  The future is in good hands with these two around!