Bill Mollison, one of the co-founders of Permaculture, wrote in 1976;

People frequently ask how much land they need for self-sufficiency. The answer is, “As much as you can control”.  Any more and you lose self-sufficiency, let alone the ability to produce an excess. If people ask “Where do I start?” then the answer is always “At your doorstep”.

I agree with Bill, because my place is proof that you don’t need acreage to begin to grow your own food.  Start with what you have.  I grow as much as I can, with the space that I have, and I try and keep the costs down by saving my own seed, making my own compost, and making my own liquid fertilizers and reusing outside inputs few times over.

Let me give you a few examples of some gardening that has needed minimal outside inputs.  Take this leek for instance. 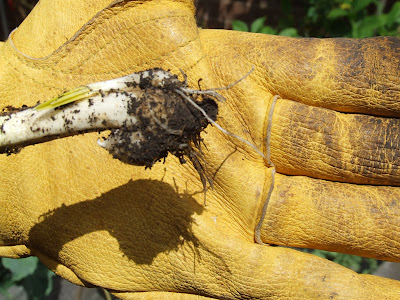 Leeks are just amazing little producers if you let a few go to seed.  A few months later it produces two little bulblets at the base that grow roots and sprout. 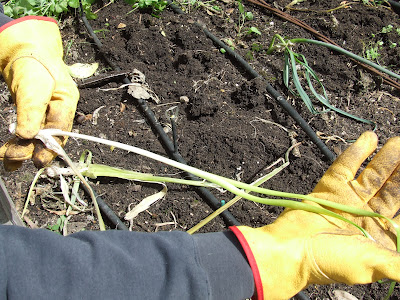 Some even grow into mini leeks which are I consider pre-grown seedlings. 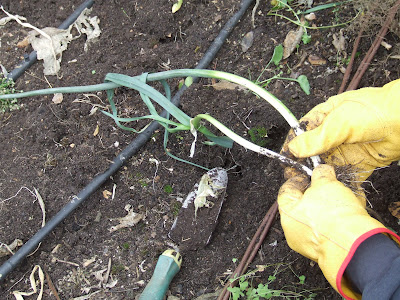 You gently dig up the flower stem, split off the bulblets and re-plant them for this years crop. 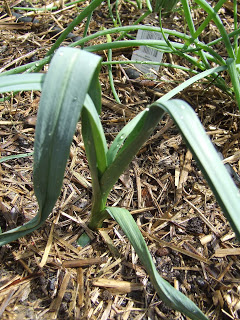 I find that you get a massive head start and do not have to sew seed.  At the end of the season, leeks planted this way are usually twice as big as the ones that I grew from seed.

Now onto my jungle, or the triffids as Kim calls them.  Pumpkins and climbing beans. 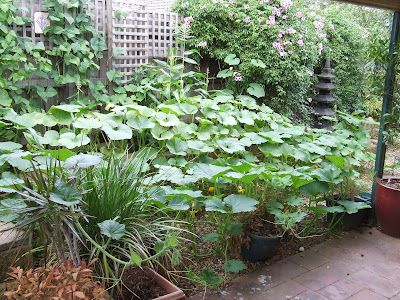 This year I tried the three sisters method of inter-planting, which didn’t quite work out as planned.  Last year I saved seed from my best Australian Butter pumpkin and from the Lazy Housewife and Scarlet runner beans that I grew.  I planted them in this narrow garden bed, with a hybrid sweet corn. 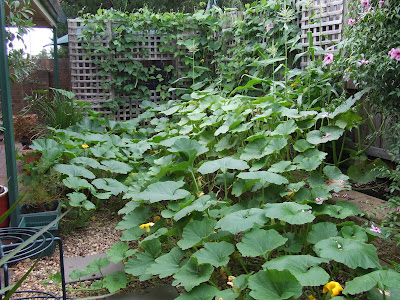 I planted the sweet corn then the beans two weeks later, then the pumpkin two weeks after that.  Even though the sweet corn was bought from a seed catalogue, the saved seeds over took them in no time, and in fact smothered the smaller corn of which only 4 plants survived and burst through the pack.  The combination of the beans and pumpkins have been a hit.  These are third generation saved seeds, and have really adapted to my climate.  There are beans everywhere, which I will let dry for soups, and meals that need dried beans.  There are about 5-7 fertilised pumpkins so far with a few more on the way if the weather remains mild.  It just goes to prove that saving your own seeds has benefits of low cost, and adaptation to your local zone.

The next example is one of minimal effort and reuse. 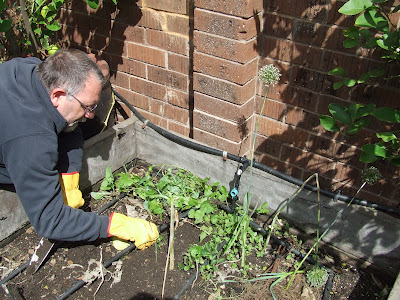 The garden bed that I recovered all of the leek seedlings from and pulled all of the remaining zucchini plants that were no longer producing, the bed needed to be prepared for an autumn planting of broad beans.  It had minimal weeds because of the zucchini shading the entire bed and acting as a weed suppressant. 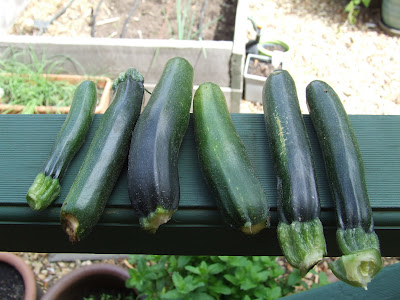 To give the bed with a little more fertility, and instead of using some of my precious compost from the compost bins, I headed over to the chook house asked for their assistance.  Around the path that skirts the fence line of the chicken run are mounds of compost that the chooks made for me by flicking dirt that is mixed with rotted manure and straw through the wire when scratching.  It is rich in fine organic matter and as good as any compost that I make myself.  I collected a whole wheelbarrow full of this compost and laid it on the top of the weeded garden bed and sprinkled over a couple of handfuls of garden lime to sweeten it.  Then I collected their bedding from their house which is sugar cane mulch filled with dried chook manure and used it as a thick 7-10 cm layer as mulch/fertilizer. 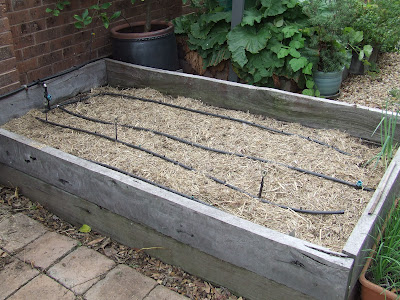 Here is the finished bed.  No digging, not much effort and all the inputs are made by the chooks!  Ready in a few weeks for the broad bean seeds that I collected off of last years harvest.  By then it should be filled with worms.

I realise that the straw is an input, however I begun to start growing lots more Lucerne (Alfalfa) which is a perennial legume that can cut over and over and can be used as straw and chook feed, and I will start to use more shredded office paper in their nesting boxes, which can both be used again in the garden.  A little bit more self sufficient than buying bales of sugar cane mulch each month. 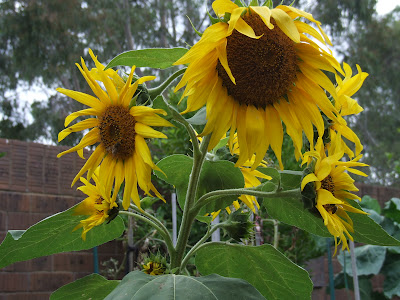 So instead of dreaming for that big block of land to grow food on, start with what you have now.  You may find that it is probably just enough, and will take up enough of you time until you become more proficient in the garden.  I started off small, with just 4 raised beds, then added a few fruit trees, and built up from there.  Once I got the hang of a few beds, I just kept adding then until I knew my limit.  I am nearly at it now except for a few vertical beds that I will be making soon.

Has anyone ever dreamed of growing food on a larger block of land, only to find that you finally decided to give the smaller parcel you had a try, and who else tries to minimise inputs and let an adhoc and unintentional permaculture design do most of the work for you?