Wednesday was a downshift day, and I put it to very good use!

As you read in the post “Simple Lives“, we had Greg and Sophie here in the morning making Feta and doing an interview for his book.  What I did not mention yesterday were all of the other things that went on during the day as well.

At about 9am, I received a phone call from a radio show called Environmentality, that runs on Wednesdays at noon on 98.9 North West FM.  The presenters wanted to interview me at 1205, to which I said yes.  So I continued to entertain Greg with my green journey, and kept making the Feta (to be posted on the Little Green Cheese soon). 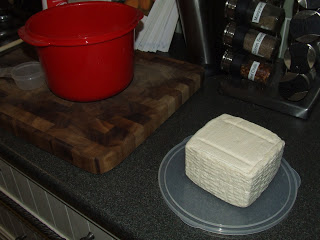 The phone rang promptly at 1205 and they queued me in.  We talked for about 30 minutes about this blog, what was my inspiration, and a few other green topics.  Once they finish editing the podcast of the show, I will post the link so you can hear it.

After the radio interview was finished, we said goodbye to Greg and Sophie, and in the time it takes to eat a curried egg roll, the photographer from the Melton Leader newspaper turned up for the photo shoot for an article that will appear in next weeks edition.  After some pretty cool shots, Mitch the photographer departed (I will post the link to the story when it is published).

It was now time to do a technical check with all the participants of the webinar for the ATA that I wrote about in the post titled “Free ATA Webinar – Energy Efficiency“.  That took about 45 minutes to get the technical glitches out of everyones systems, but it all worked in the end.  I am looking forward to it, as the other speakers topics are very interesting.

Once the technical test was finished, I ducked down to the produce store as I had run out of chicken feed. I had a quick chat to Peter who owns the place and he noticed my Greening of Gavin T-Shirt, and said that he would check out my blog.  Peter also gave me an idea for some new garden beds.  He had a lot of blue plastic 200 litre barrels that had contained food preservative that he was selling for $20 each.  I asked him what people bought them for, and he mentioned that people cut them in half longways and turned them into things like horse/goat feeders.  Nice idea I thought as I have one of these barrels at home.

After unloading the chicken feed into the shed, I realised that I had a deadline for an article for the Caroline Springs Community Update (see page 32), which I write for monthly.  My column is called “Green Living Tips”.  So I quickly whipped up a rehashed article about used coffee grounds and sent it into the editor.

Dinner time was upon us so Kim made some Falafel wraps with some salad, and we scoffed them all down.  Once the dishes were washed up, I wrote a blog post, and another post on the MSLG website.  I even managed to spend some more time with Kim watching a few episodes of “The Colony season 2” that I found on the interwebs.  It is quite good and here is the synopsis and a short clip from episode one;

“THE COLONY is a controlled experiment that places ordinary people from all walks of life in a simulated post-catastrophic environment to see what it takes to survive and rebuild in a world without electricity, running water, government or outside communication.”

The scenario is exaggerated beyond belief, but it still has good examples of living off grid, which I especially enjoy.  Kim likes all the drama that goes with it, however I just ignore those parts but we both enjoy a good discussion afterwards about how realistic it is or is not, and what would be do in those circumstances.

Anyway, a big day and quite action packed.  I love the sustainable lifestyle!