Last Saturday week, I held a workshop at my house for the Melton Sustainable Living group.  It was a simple workshop, but fun to present.  It took me about an hour to build and populate the new worm farm (rectangle box in photo), and additionally, I showed the audience how to harvest worm castings from my existing worm farm (round one in the photo).  Both of these worm farm kits are made by Reln plastics, and marketed under the Tumbleweed brand (I have no association with this company, I just like the product).  They are made from 100% post consumer recycled plastic.  All of the packaging (except for a small plastic strap) is utilised in the construction process and eaten by the worms! 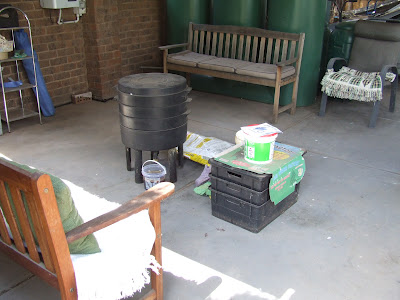 As you can see, it is all set up ready to go, and it also gave me an opportunity to clean at least half of the carport! 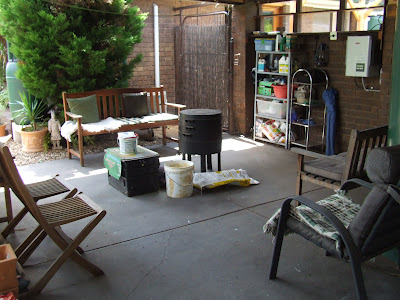 Now, in a moment of silliness, I forgot to give Ben the camera to take photo’s during the workshop, so you will have to use your imagination.  Here are the basic instructions on how to put one of these things together.

1.  Locate in a cool position in afternoon shade. Morning sun is OK.  I place mine on the south side of the house, northern side for northern hemisphere readers, or somewhere where they will not freeze in winter.
2.  Setting up the base as per instructions.  Some have legs, others do not and my new one had legs that were unusually difficult to figure out and the instructions were no help.  Both my worm farms have legs.
3.  Put the first working tray on top of the base with legs, then fill a bucket with about 7 litres of water and place the worm farm bedding block in it.  This is made from coconut coir husk.
As the bedding block expands, start to break it up into an even mix. It took about 10 minutes. Use the
paper wrapper too because all the paper and cardboard packaging has been designed to be worm friendly.
4.  Fold and place your cardboard packaging into the base of the working tray, then spread the expanded worm bedding block on top of this. The worms will eventually eat all the bedding and cardboard. 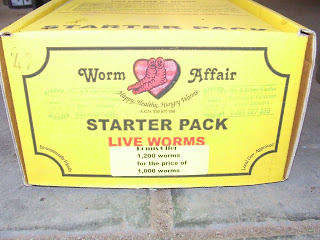 5.  Spread your worms (minimum of 1000 composting worms) on top of the bedding, and cover with a a few layers of wet newspaper or cardboard.  The more worms you initially add, the more food they will compost for you.  I used an old cotton dressing gown soaked in water, that Ben had grown out of.   One of the audience mentioned that this must be the Taj Mahal of worm farms, and that I must love them very much.  I replied that yes, I do! 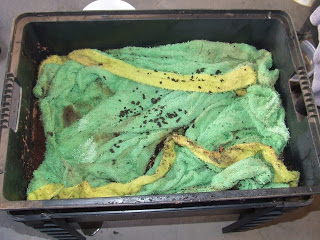 6.  Don’t feed the worms at this stage, and let them settle in for one or two days.  Here some of them are their new home.  From experience it will take about 3-4 months for the initial 1000 odd worms to fill up their first tray.  Once the tray is full up to the lip inside, then pop on the next tray and start feeding the worms from the new tray.  Just make sure that the first tray is full enough to come in contact with the new tray so the little worms can climb through. 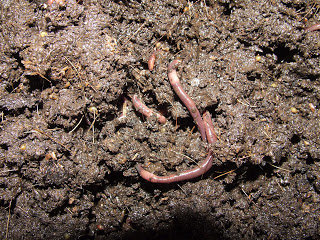 So now that I have a second worm farm, I have the means to create lots more worm wee tee and castings.  The worms can be fed most kitchen scraps but steer clear of onions and citrus, as it is a little too acidic for them.

As a guide worms will eat anything that was once living. This includes:

As I mentioned in my post titled “Home-made Liquid Fertiliser“, you can used the worm wee tea as a liquid fertiliser, so as they increase in number, I will be able to keep up with supply for the garden. 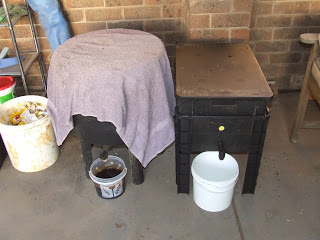 Just in case you wanted to know more, here are some worm facts that I found at ResourceSmart Victoria which also has instructions on how to make your own worm farm without having to buy a kit.

You can also add compost worms to standard compost bins or heaps, as long as you do not let the contents of the bin get too hot.  About 2 years ago, I put a big handful into my Aerobin, and they have multiplied greatly.  They don’t live in the top 20 cm as it is too hot, but prefer to work at a lower level.  I just keep piling on brown and green garden waste and they keep gobbling it up.  When I take compost from the bottom, there are no worms to be found as they live higher up.
I also saved the old laundry sink, since we have just had this room renovated, and will be turning this into a worm farm in the next few months, so more on that further along the sustainable living journey.  When I was a teenager, my dad used to use an old bath tub as a worm farm and it was most successful in producing many worms that we used for fishing.  I think he used Tiger worms, however most worms that you buy in boxes or from a large worm farms today are ‘Red Wrigglers’ and ‘Indian Blues or Dendra’s’.
So, hopefully this post has given you enough information to start your own worm farm.  The good thing is that as pets, they don’t bark, bite, kill birds, or annoy you in any way, and their droppings are the most useful matter on the planet!  To finish off, here are some wormy quotes;

“Worms are the Intestines of the Earth”
ARISTOTLE

“It may be doubted whether there are many other animals which have played so important a part in the history of the world as these lowly organised(sic) creatures”
CHARLES DARWIN ON EARTHWORMS, 1881

“Without the work of this humble creature, who knows nothing of the benefits he confers upon mankind, agriculture, as we know it, would be very difficult, if not wholly impossible”
CHARLES DARWIN ON EARTHWORMS, 1881