My chickens have no voice, but I know that they are happy because I treat them kindly and with respect.  I love my chickens, and everything they do in return for me.  They are well kept, have space to free-range amongst the garden beds (when empty), and they provide our family with entertainment and an abundance of healthy eggs! 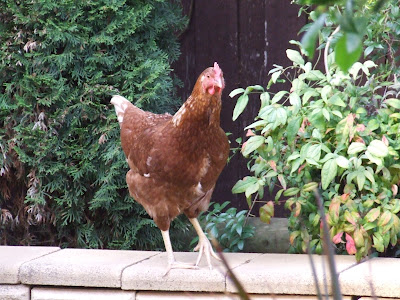 I have been quiet on the subject of factory farmed animals for quite a while, and learnt a few facts yesterday at the Sustainable Living Festival, so it is time to break the silence.

Voiceless Australia have launched a campaign highlighting the conditions that factory farmed pigs and chickens are kept in around the country.  I support them 100%, and believe that we are way behind European Union standards for animal cruelty laws.  As Hugo Weaving (ambassador for Voiceless) says, “If I treated a dog the way pigs and chickens are treated on these farms, I’d likely be prosecuted”.

These animals are treated like objects, and without respect and dignity.  Having watched pigs as a kid on our dairy farm, it does not surprise me that it has been found that they have the intellect of a 3 year old human child, and as for chickens, they each have their own personality and social structure.

So pleased be warned that these two following TV ads may disturb some readers, but they are factual.  I personally don’t think they are hard hitting enough, but they certainly do get the point across.

Now I am not asking you to stop eating pork and chicken, but just take the time to think of where that cut of meat comes from when you buy it at the supermarket.  Most of all, by being aware of where our food comes from, we can make better choices, and advocate cruelty free products.
So lets speak up so that we end these cruel factory farming practices in Australia, and indeed the world.
-29.5328037145.491477 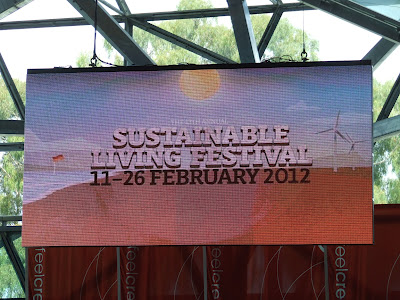 We had a great day out today, and just got back from the Sustainable Living Festival a few hours ago.  Ben and I left at 0900, picked up our friends, David and his son Liam, and headed off to Federation Square. 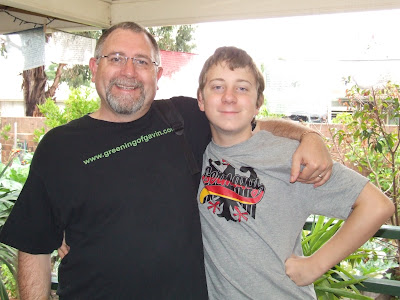 We arrived at about 10am, and did a lap of the green market place that took us about and hour.  There were so many stallholders with information and goods, that we just had to stop and talk to most of them. 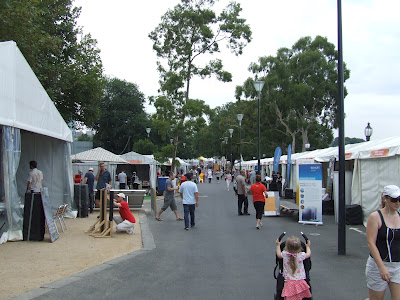 At 11am we stopped at the presentation under the gum trees, and listened to a talk about Permaculture in the Suburbs.  This talk was given by a bloke called Dan Palmer, who was one of the originators of the Permablitz concept and a founder of Very Edible Gardens.  It was great and I learnt a few things that I will put into practice like growing my own mulch, and the benefits of ducks! By the time I swung around to take a picture of Dan, Pete the Permie jumped in his spot and started to present ‘How to make apple cider’.  I should have hung around but the kids were hungry, so we skipped this one. 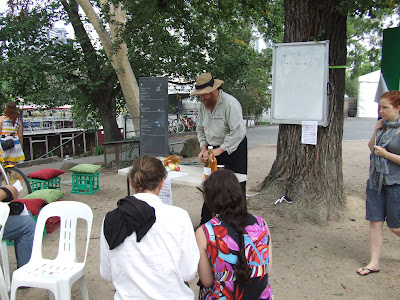 So we popped down the the food area, and both Ben and Liam had a non-dairy ice-cream which they said was very yummy, and on the way back we washed it down with a glugs of water from the tap.  We then had lunch which consisted of a veggie burger.  It was delicious.  We sat and talked for a while before heading off to the next presentation. 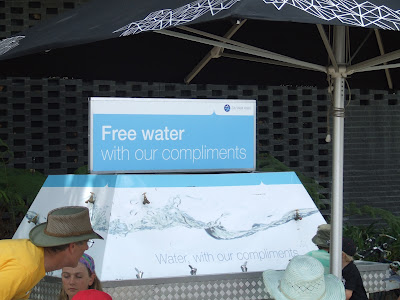 Then it was into the BMW Edge theatre where we waited for 15 minutes whilst a small army set up for the next presentation.  This was titled ‘The Great Australian Home Retrofit’ presented by Beyond Zero Emissions.  They believe that instead of giving part of the Carbon Tax proceeds back as cash to householders, it should be given as a rebate to entice people to retrofit their homes and make them more energy efficient, therefore providing a longer term benefit via reductions in energy bills.  Fair point, I reckon. 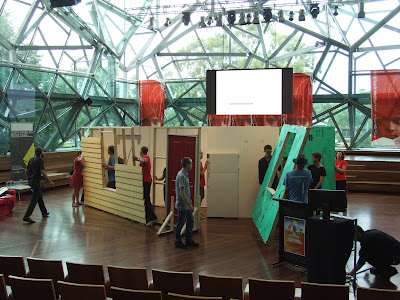 They had managed to make a set that looked kinda like a home and showed everyone how easy it was to retrofit the building fabric with insulation, double glazing, window awnings, and draught proofing around doors and gaps. 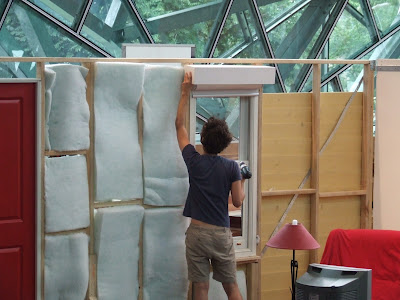 They changed appliances, light fittings to LED, and even swapped out the gas stove for an induction stovetop. 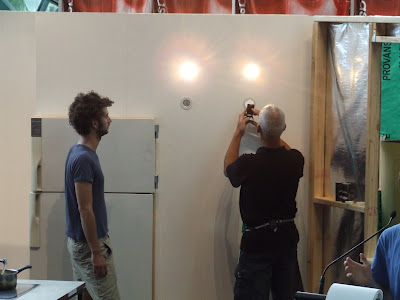 Then it was champagne all round for a job well done. 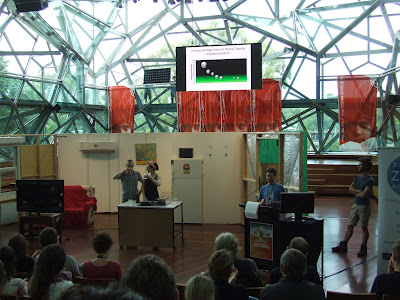 It was about 2pm so we had about 30 minutes to kill.  David was convinced that he needed to find out more info about solar hot water, so we found a vendor and got a few pamphlets of information so he could digest it later. 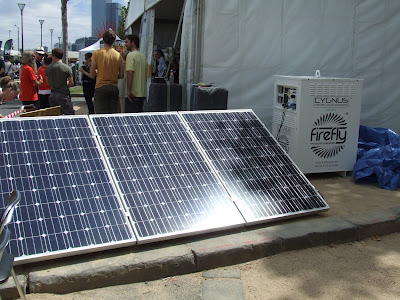 We stopped outside the fix it tent where one could take a broken item and learn how to fix it.  This tent was powered by a small PV array.  I talked to one of the guys who was looking after it, and he said that the 600 watt system was enough to power this tent all day.  I initially thought that the inverter was a bit of overkill, however as it was totally off-grid it also had the storage batteries in the big white box.  A nice portable system for this kind of event. 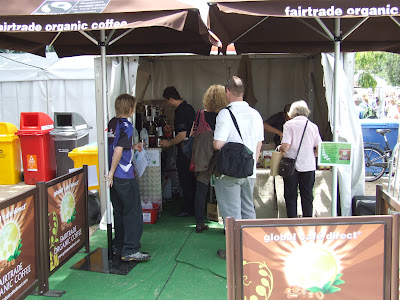 By this time David and Liam needed a coffee and hot chocolate respectively, so we waited for the slowest barrista in Melbourne (so David told me) whilst his coffee was made in a fully decomposable coffee cup.  The coffee was nice as well, being organic, fair trade. 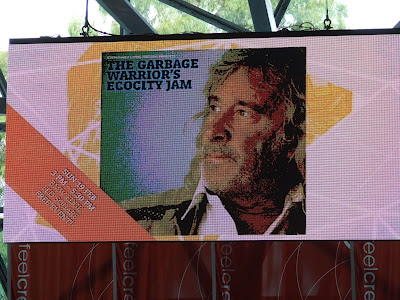 Then it was on to my favourite part of the day.  It was off to see Michael Reynolds for the second year in a row.  The auditorium was packed to capacity and people were even sitting in the aisles.  The Garbage Warrior put on quite the presentation, and he was funny, enlightening and inspirational.  The guy and his team (Biotecture) travels the world making Earthships, which he calls Sustainable Autonomy For Everyone, or SAFE for short.  A fantastic building concept that uses recyclable materials and is fully self sustaining.  You can even grow you own food within it. 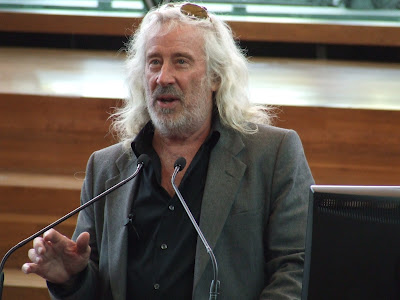 I had a great day, as did everyone else and I will certainly go again next year, however I am going to lock away the entire weekend.  The reason I didn’t go to some presentations on Saturday was because I was presenting my own workshop for the Melton Sustainable Living Group called “Building a Worm Farm”, but more on that in another post.

I was reflecting today after I listened to Dan give his talk under the gum trees that this weekend charges my sustainable batteries for the year, and it gives me renewed hope that we will indeed solve the big issues of our time, in time.  Just being among so many like minded people gives me the strength to keep on fighting the good fight, and to continue to promote this way of life as a solution for reducing our environmental footprints.  Next time I write a post about doom and gloom, can someone please remind me that there are so many of us out there trying to make a difference, that all is not hopeless, and to reflect back upon this post! Or just kick me in the pants and tell me to get a grip.  Either way will work!
🙂

So did anyone else from Melbourne manage to get along to this event, and if you did, what did you think of it? 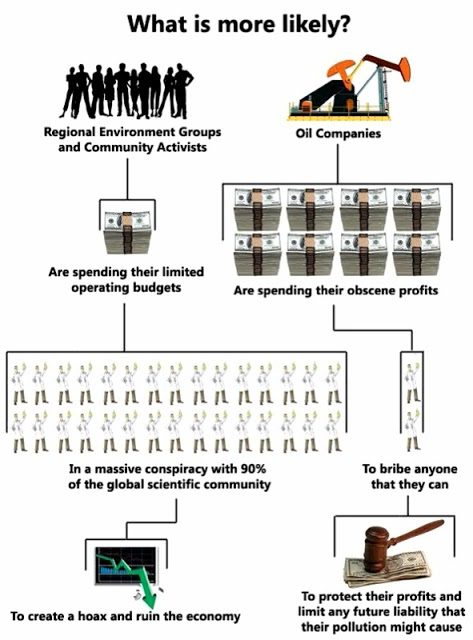 Nice to find an image that fits in with the latest revelation in Climate news yesterday.  One of Australia’s climate sceptics, Professor Bob Carter of James Cook University, found to be on the payroll of the Heartland Institute, a renowned front for big oil interests.  Read more about it in this article from The Age newspaper.
Vested interests caught at it again!  Shameful.
-29.5328037145.491477