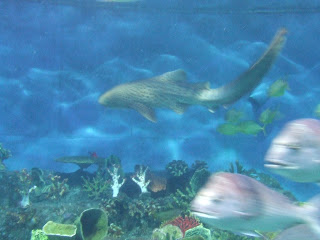 Researching possible solutions to avoid the collapse of the marine ecosystems has taken me all over the web.  Most solutions that I have come across are common sense, however during my research one theme kept popping into my head is this;

More People = Less Fish
Less Fish = Less People
Less People = More Fish
ad infinitum……
Bit of a cycle isn’t it?.  Let me make it clear, I don’t propose less people, but this looks like the logical conclusion if we keep overfishing the oceans and destroying habitat.  Just stating the bleeding obvious I suppose so lets move on to something that is a little more in our control.
In yesterday’s post, there were quite a few comments about eating locally caught seafood.  I do tend to agree that this is a possible solution.  I would probably take it so far as to say that if you caught it yourself then it is even better.  I remember that when I was growing up near the mighty Murray River, the only fish we ate were the ones we caught ourselves.  This included fish like redfin, perch, and even the odd Murray Cod.  Also occasionally we caught and ate yabbies (freshwater crayfish).  Back then the European Carp problem was not half as bad as it is now, but when we did catch carp, we minced them up to make fish patties and they were edible.  Whilst living in Darwin in ’86, when I was still in the navy, we often went fishing for Barramundi, and ate the catch within a few days.  All very local fare, and knowing the trouble it takes to catch fish with a hand line, probably very sustainable.
Another possible solution is sanctuaries that cordon off areas of ocean to allow the fish species to rejuvenate and thrive.  Then once re-established, limit the catch to allow regeneration year after year.  It has been found that this works in many parts of the world today.  The problem is that you have to do this before the breeding stock is overfished, unlike the Newfoundland cod issue, where they never recovered (see video below)
If implemented quickly enough then populations do recover.  Darren Collins mentioned yesterday that scallops suffered a similar fate in Jervis Bay, NSW.

“I grew up in a fishing town, and saw the scallop dredges destroy whole populations of marine life in Jervis Bay. As I diver, I saw the damage first hand – the bottom of the bay became a desert. Initially we could hand-pick enough scallops for a few meals in one dive, but by the end we couldn’t even find a single scallop. The ‘boom’ industry suddenly went into bust, all the fishing boats disappeared and I’m sure many family fishermen lost lots of money (and their livelihood), but they only had themselves to blame. Plenty of people had been warning them about what was to come. Thankfully now, 20-30 years on, the bay has largely recovered and is now a renowned tourist diving destination.”

This is a very good real life example of the typical boom/bust scenario that we see with overfishing, but one that has a happy ending.

Another solution was the effect the movie “End Of the Line” had on the cat food industry, specifically Mars (yes the confectioners) who make these iconic petcare brands; PEDIGREE®, ROYAL CANIN®, WHISKAS®, KITEKAT®, BANFIELD®, CESAR®, NUTRO®, SHEBA®, CHAPPI®, GREENIES® and CATSAN®.  I am not saying that Mars are saints, but at least it is a start that they are acting upon this issue. (see video below)

“In March 2010, Mars Petcare announced an industry first — a commitment to using only sustainably sourced fish by 2020. At the beginning of 2011, we started on this journey by introducing Marine Stewardship Council (MSC) certified fish varieties for its WHISKAS® brand in Europe.”

Many other companies could follow suit and raise their credibility.

Yet another solution is to only buy sustainable harvested fish.  As a few readers pointed out, in Australia the Australian Marine Conservation Society has published a Sustainable Seafood Guide and an iPhone/iPod app for those on the move.  The guide is good, but only highlights seafood in the Australian fishing zone (see video below).

For a global resources the Marine Stewardship Council’s website www.msc.org is a good place to visit.  They have a certified ‘Fish to Eat” guide, with lots of articles about fisheries that have been awarded the MSC certification.  They also have an international guide to Dining out, which lists all of the MSC certified restaurants.  This is what the MSC logo looks like, so look for it at fishmongers and supermarkets.

Have a look at the video below to get a better idea of what the MSC are all about and why it is now required to help people make better seafood choices.

So in summary, eating sustainably harvested seafood is probably the only way we will be able to make a difference, other than petitioning governments to assign realistic fishing quotas and ensure they enforce them.

Over the last few days, I have learnt so much.  I did know a little about the issue before hand, but certainly not enough.  I am so glad that I wrote this series, as it has helped me to understand this issue so much better and let me share my research with you, the reader.

If anyone has any other solutions that they know of that I may have missed, please leave a comment (besides giving up eating fish altogether).  Kim and I intend on continuing to only buy MSC certified fish when we do partake in the odd fishy morsel.  It is the only thing I can think of that will make a difference on a personal level.