Okay, I know there is no such thing as an ‘almost vegetarian’.  That is a bit like saying just a little bit carnivorous, or half an omnivore! 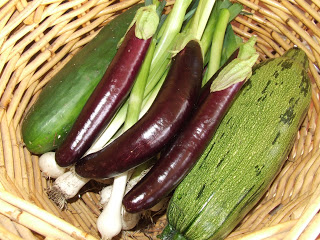 So this post is an update for the goal I set at the start of the year, “Reduce our meat intake by 80%”.  Well one thing for sure, eating mostly a vegetarian diet is a lot easier than I thought it would be.   Since a week before New Year, we are down to just 2 meals a week with meat on average, with Kim a little more, and me a little less.  Even Ben is joining in, sometimes.

Let me give you an example of our daily meals;

Breakfast:  Boiled eggs and toast for Kim and Ben, with Porridge and fruit from me
Lunch:  Is usually a hearty curried bean soup (one of Kim’s specialtys) with either crackers or home baked bread or a green salad with feta and olives, or a big salad sandwich with cheese.
Dinner is varied.  Sometimes veggie burgers, sometimes a meat substitute (Fry’s Vegetarian and Sanitarium Vegie Delights range both have a great selection that tastes nice) with steamed or roasted veg, sometimes pasta with a homemade sauce, or even one of my favourites,  Lentil and Mushroom Bourguignon.  Then some fruit or icecream for desert, and some raw mixed nuts for afters.  We often substitute red meat with lentils and beans, and find the same meals that we usually make (sans meat) to be very nice.  We use lots of herbs and spices to flavour our food, and I have not had a bland meal yet.  I am very satisfied with our diet so far, and do not feel lacking in energy or motivation.  That said, in the first week or two I felt a little blah, but after all of the crap was flushed out of my system, and I cut down to one coffee a day, I feel great.  No stomach or intestinal issues (which I usually get about twice a month), and am now regular as clockwork (I know, too much information).

We have regular snacks which consists mainly of fruit, nuts, cheese and crackers, and raw veg or dips.

So the meat meals that we have had, the proportion of meat has been minuscule compared to what we used to eat.  For instance, Kim made an egg and bacon pie last week, but there was only a smidgen of bacon (biodynamic) in it, but the flavour as fine.

She made a fish curry last night which only used two fillets of whiting (MSC certified).  It was delicious, but then again so are her veggie meals. 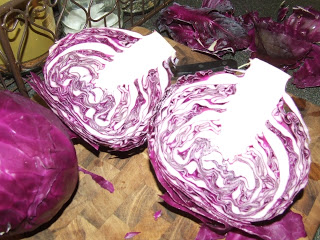 As we still have eggs and dairy we get most of our calcium and vitamin B12 from those, but what about the other essential nutrients.  Well for those wondering if we are getting the right amount of nutrients in our diet, here is a list of Non-animal sources of other important ones (highlighted the ones we eat):
Omega 3 fatty acids Linseeds, soybean oil, rapeseed oil, tofu and walnuts.
Vitamin A Green leafy vegetables, yellow/orange vegetables and fruit.
Vitamin B2 (riboflavin) Fortified breakfast cereals and soya drinks and almonds.
Vitamin D Exposure to sunglight, fortified breakfast cereals, vegetable margarines. Kim takes a vitamin supplement as she has trouble with vitamin D.
Calcium Fortified soy beverages, sesame seeds, fortified fruit juice, broccoli, green leafy vegetables, tofu, beans and pulses, or even calcium supplements.
Zinc Tofu, legumes, peas, nuts, seeds, wholegrain cereals and wholemeal bread.
Iron Fortified breakfast cereals, wholemeal bread, dried fruit, green leafy vegetables, beans and pulses, molasses, nuts and seeds, tofu.
Selenium Brazil nuts, sunflower seeds, molasses, wholemeal bread.
Iodine Iodised salt, seaweed.
Protein Soy products, legumes, lentils, nuts, seeds, wholegrains.
Overall we have a really balanced diet, with everything in moderation.  I like this particular Michael Pollan quote that he mentions in the documentary Food Inc.:

“Eat food. Not too much. Mostly plants.” ― Michael Pollan, In Defense of Food: An Eater’s Manifesto 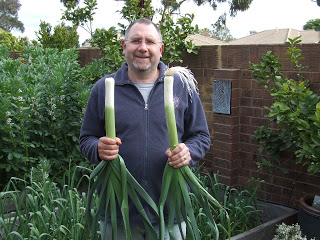 So why are we doing this?  Well the obvious one is to drastically lower our carbon footprint by reducing food miles, and eating locally, however the other main reason is one of health.  Choice magazine has this to say about the health benefits of a mostly vegetarian diet;

“Vegetarian diets are generally higher in fibre and lower in fat and cholesterol. There is growing evidence that vegetarians are less likely to suffer from cancer, heart disease, strokes and have a longer life expectancy. People who choose a vegetarian diet for health reasons are also likely to have other healthy practices: such as exercising regularly, not smoking, or abusing drugs or alcohol.”

In November, I was at the upper limit for my bad cholesterol, so this is the choice I made to lower it and not to have to go on medication.  We have also lost a little weight, but not as much as I had expected and I do daily exercise.  I have a six monthly check up at the end of the month with a full blood test, so we will see if it is working.  Even if it hasn’t lowered it, I will persevere, because I feel so good and full all the time.
What is not to like about this diet?
-37.6777778144.5686375