It was an exciting and eventful day on many fronts.  It was our most sustainable Christmas to date as we took a minimalist approach.

Up early at about 7 am and did all the chores (chooks, watering, compost) before Megan and Jake arrived at 8.30am.

Firstly, before any gift giving, we made and ate breakfast.  Our tradition is to make up croissants with ham and Swiss cheese then popped in the microwave for 25 seconds each to heat them through.  Served with a glass of Bucks Fizz (champagne and orange juice). 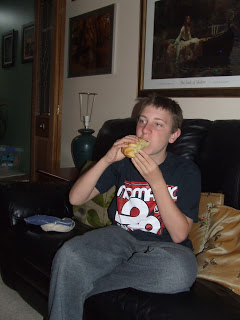 Ben on his second croissant! 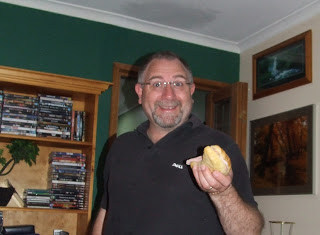 I am very excited!  After all that was scoffed down, it was time for presents.  Ben had been waiting very patiently. 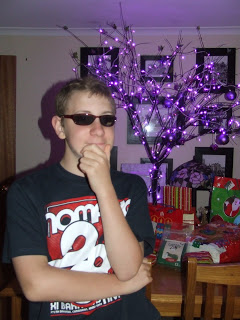 Ben trying to be cool!

Our tree was very minimalist this year.  It is a old fallen branch of one of the trees out the back, painted black and decorated in purple LED lights and baubles.  Beats cutting down a tree, or buying a plastic one.  All very friendly for the environment.

Anyway the rules this year were simple.  Kim and I didn’t need anything and we requested that the kids did not buy us anything either, as I just got a new rainwater tank, and I bought her a new laptop earlier on in the month.  However Megan broke with tradition and bought us a set of 3 bamboo chopping boards.  Santa brought Amy, Thomas (Amy’s boyfriend), Megan, Jake (Megan’s boyfriend) and Ben a few small, practical gifts each.  Ben received some PC games and books, Amy got a spade, two pruning saws and some gardening gloves for her new garden.  Megan received a cookbook, and Jake got some Cherry Jam which I think he really appreciated.  Any wrapping paper was recycled or put away for reuse later on. 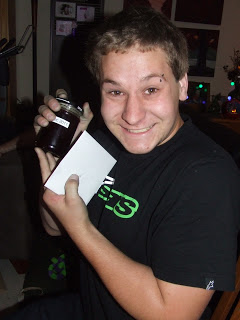 Even the dogs got a gift each which they both opened by themselves (clever dogs). 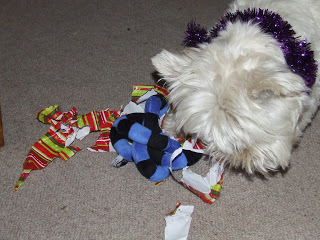 Teddy’s first Christmas with us, and he knew exactly how to open it! 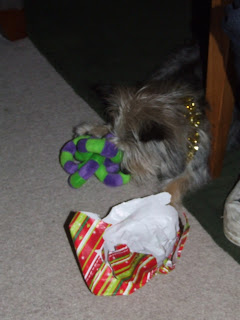 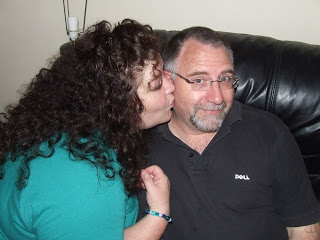 This was the best present of all.  A cheeky kiss from my gorgeous wife Kim.  What else would a man ask for. 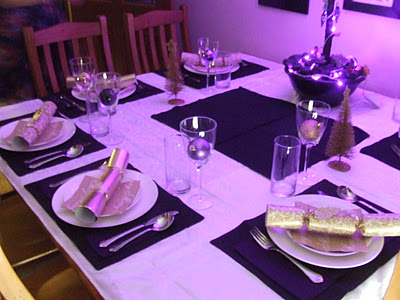 Once the gifts were exchanged Megan set the table for the six of us.  It was beautiful and very purple! 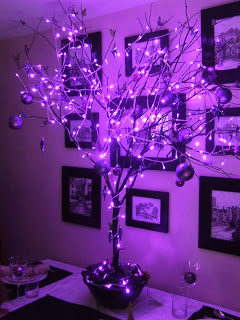 It was getting a bit hot for Kim (32C) so she and the kids went for a swim in the pool, whilst I prepared Christmas Dinner.  I glazed a free range leg of ham with cherry jam and cloves and popped that in the oven.  Then I prepared some bio-dynamically raised chicken breasts by stuffing them with a mixture of Kim’s herb bread (breadcrumbs), fresh sage leaves and pine nuts, and wrapped them in prosciutto then baked in the oven.  We had local roasted potatoes, steamed carrots, cabbage and broccoli and Kim made some Yorkshire puddings and a red wine gravy.  It was all washed down with some local Rose wine.  For dessert Kim made a Pavlova with fresh cream and berries.

During dinner Kim read out a letter written by Adam, who is living in Cologne, Germany with his girlfriend Sina.  The letter was very witty and made us all cry and laugh at the same time.  We had each written a letter to him and sent it over a few weeks ago, which he read to Sina whilst holidaying with her family in the Black Forrest.  Adam sent through a few photos of him and Sina with the letter, which were very nice. 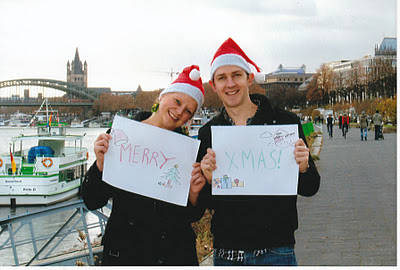 After dinner the kids helped clean up and played some board games then left at about 4.30 pm.

We all had a great day and then things changed weather wise.  From a hot 32C it dropped 10 degrees in 10 minutes.  Massive thunderstorms started to develop, and then the heavens opened up and down came the hail.  It was not too big, about the size of a 5 cent piece, but large enough to knock most of the peaches off of our tree and to damage the greenhouse.  Across the north west of Melbourne there were reports of golf ball sized hail and smashed house roofs, cars dented, and flash flooding. 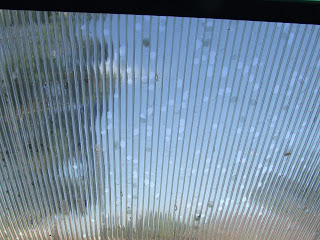 One of the greenhouse panels.  Lots of little holes, but as luck would have it, only to the outer layer.  They did not go all the way through so the greenhouse survived. 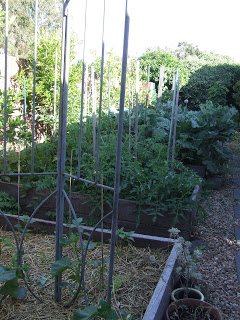 The vegetables all survived except for a few leaves chopped off here and there. 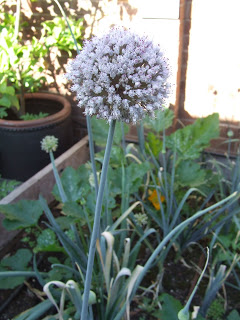 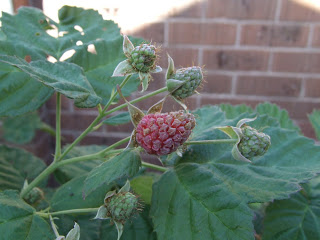 The loganberries keep on growing larger and larger. 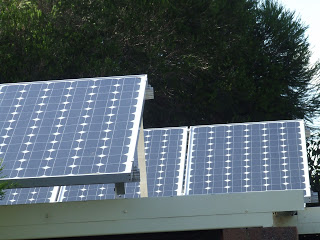 But best of all the solar panels are fine.  After a quick inspection they are nice and clean after the 24 mm (1″) of rain that fell on Christmas Day!  No hail damage at all.  All we have to show for the four thunderstorms is a very soggy Cluckingham Palace, and two overflowing rainwater tanks, which all in all is a blessing compared to some of the news reports around our area.  Apparently there was even a tornado touchdown in the bush about 20 km away from us!  Mother nature showing her wrath no doubt.  Enough said and we all know the reason for this crazy weather, don’t we? 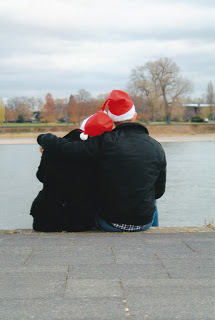 I am taking a bloggy break until New Years, so it is fair the well from me for a few days as I relax with family.

How was your Christmas/Holiday?  Leave a link if you have a post/photos.  I would love to read them.