I am so glad that so many people are going to join in on the energy challenge.  As my pal Michael in Canberra mentioned today, Lord Kelvin said it the best with “If you cannot measure it, you cannot improve it”.  Well said that man.  So lets start feeling empowered and taking back control of our electricity usage!

So to solidify this for you here are two examples.  If your toaster is rated at 1800 watts, and you cooked toast in it for 1 hour, you would have consumed 1800 watt hours or move the decimal place three places to the right and the meter would have measured 1.8 kWh!  So it is the rating multiplied by time or 1800 x 1 = 1800 watts or 1.8 kWh.

Here is another that I want you to figure out by yourself.  You have a clothes dryer that is rated at 2300 watts.  You dry two loads of washing that takes two and a half hours.  How much electricity did you consume in kilowatt hours?  2300 watts x 2.5 hrs = ????

Hopefully you get the general idea, and most appliances can be roughly measured this way.  There are also simple devices that can measure individual appliances, but more on that during the challenge.  Ready for the next lesson?

Firstly there are two types of electricity meter, Electromechanical and Digital (so called Smart meter).  I have had both at the house I am living in.  The Digital is easy to read, however the electromechanical is a little bit harder, but not that hard.

Lets start with the one with the clocks, and have a bit of practice as well.  As you can see, the dials move both clockwise and counter clockwise.  Maybe not that fast at your place, but you get the general idea.

Read the instructions and then try the few practice questions.

Here is an example 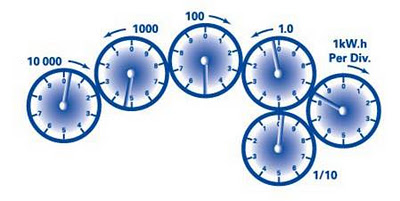 So reading this example from left to right, the reading would be 04508.9 kWh.  This first example is a little tricky because the 100 clock had is right on the edge of the 5.  Just to confirm it is a 5 look at the 10 clock which is between the 0 and the 1 which confirms that the 100 should be a 5 and not a 4.
Anyway, lets try another example.  Try this one out for size.

I will do this one for you.  It reads 46372 kWh.  The meter tells you that the house has consumed that amount of electricity since it was first installed.  So what would it look like if you the next day if you had used 20 kWh in-between readings.  See if you can figure out the next one by yourself.  I have already given you a big hint!

So what does this one read?

Keep in mind that when the power company representative reads your meter, they do NOT set it back to zero. Therefore the dials keep turning until the next time the meter is read. By subtracting two consecutive readings, the amount of kilowatt hours is determined for your billing period which can be monthly or more often than not for a residence quarterly.
You should have the hang of it by now.  Lets move on to the Digital / CoGen / Smart Meter.

Sometimes these can be a bit tricky as they have only one button to press that gives you multiple readouts.  Mine has these instructions. 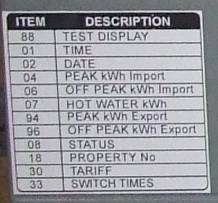 So on my meter there are two import readings that I have to take to determine how much electricity that I have consumed or import from the grid.  They are items 04 and 06 on my meter like thus;

Confusing isn’t it.  Especially seeing that I pay the same rate whether it is used during peak or off peak.  So to figure out how much electricity I have used from the grid, I must add together the reading from both 04 and 06.  From the photo it would be 32.9 kWh + 16.9 kWh = 49.8 kWh.  We will only record the total which makes it easier for this energy challenge.

NB:  This lesson is only for people who have a Solar PV system and feed back into the grid.

So to confuse things even more, I have solar electricity that I export to the grid, which is recorded at 94 and 96 on my meter.

As before we simply add the two numbers together to get the total export reading, in this case 18.3 kWh.  For those who do have solar and export it we will only be recording the total.  You will also have to read the total production from your PV inverter.

So that is all the lessons for today, and I hope I haven’t totally confused you all.  Have a practice reading your own meters because tomorrow we are going to take our baseline reading and record them on paper to start with.

See you all tomorrow for further Lessons and Actions in The Great Kilowatt Challenge!