So how will we live in the ‘burbs during and after energy descent or more to the point, what will the living arrangements be like?  Well first, let me describe where we have come from.

Back in the 1950 through to the 70’s, many people moved from the countryside or from other countries to Australian cities in search of a lifestyle different from what they were used to.  Whether it was an escape from farm life, or searching for a better life after years of war, they were all chasing the great Australian dream of a three bedroom home in the suburbs located on a quarter acre block that they could call their own.  Urban spaces grew larger and turned into suburbs.  The suburbs boomed as a result and are still growing to this day.  Initially they grew veggies, had rainwater tanks for water storage, kept chooks, and caught public transport to work, but as the suburbs began to sprawl, something happened.  They left behind a very important part of our social structure that had been present in human society for many millennia.

This social structure was the live-in extended family which included the community that they grew up in.  We began to drift apart due to car ownership, and cheap fossil fuels to run them.  Over the past thirty years we have paid for this mistake in the form of diminishing home skills, free child care, a sense of place and belonging, and most of all, sustainability wisdom.  This mistake has not put us in the best starting point for an energy descent or climate change adaptation now that it is required of us.

Nor have we helped ourselves by buying into consumer culture and the illusion that a McMansion will make us happy, increase our self esteme, and elevate our standing in the community.  What people don’t realise is that there is no sense of community in the burbs, so I don’t really understand this whole status thing anyway.  The inhabitants of these houses soon realise that once the gloss has worn off, they are left with a space so large and unweilding that it takes a big part of their household budget just to maintain, heat and cool it.  If you think energy prices are high now, then wait until oil prices continue to increase.  It may be a case of adapt or starve/freeze/heat stroke (name your poison of collapse).

So what do we need to do so that we can better utilise the living arrangements in our suburbs?  I see a few things happening now that gives me hope that I would like to share.  There is evidence that families in my community have begun to relocate back into a single abode or at least closer together probably more due to financial hardship caused by rising prices, or maybe because they have realised that extended families have a lot to offer us.  Just to clarify, I use the term extended family loosely, and it doesn’t have to mean blood relatives.  Currently many people in the burbs have spare rooms that could be let out to earn a little cash.  It is not a big thing at the moment, but I can only see it getting more popular as we head down this path we have chosen. 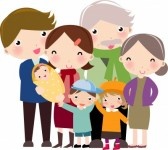 Anyway, in this type of extended family everyone has a role to play.   Traditions, values, and necessary skills are passed on to each generation, and are passed on as part of the new cultural shift.  Bringing up children is easier as it is shared between Grandparents, Parents and older siblings.  Everyone helps out, and shares the bounty of their hard work, whether it be in the veggie patch, or preserving food, or mucking out the animals pens.  All of these things are very achievable in the backyard as they were in days gone by.

As government funds dry up, more people will choose to educate their children at home.  The classes at home can be wide and varied and “school” can be taught by multiple generations.  It doesn’t mean that the basics won’t be taught, but I believe that some of the subjects taught in our schools now will not help our children to adapt to the future.  Real skills for real situations.

I don’t think that the community spirit is there yet, as people are still frightened to talk to each other in the street.   However, community is growing yearly which will reaches a point that either local councils/government change zoning laws to accommodate the new paradigm, or people just ignore them and start to transform the suburbs into village type spaces with home businesses and community gardens in vacant lots and revived edible nature strips.  Practicality for practical people.

I am not saying that everyone will form a circle, hold hands and sing kumbaya.  Far from it.  We are in for a tumultuous time, and we will have our differences, but once people realise that stuff doesn’t make you happy, and that we are actually going to be alright, we will have a better, more purposeful lifestyle to be proud of.

The next post in the series will be about making your home more comfortable in a sustainable way.  Until then, please share this series of posts, or talk about them with friends and family.  Some may think we are wack jobs now, but will scramble for advice when the going gets tough.