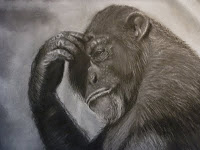 My inquisitive mind was wandering all over the place on the way home tonight.  I am going to share my thought pattens, even though sometime it may seem a little out there.  Here goes trendsetters!

First my thoughts were drawn to the preparation work that Kim and I have to do this weekend for Sustainable House Day.  Call it a spring clean if you will.  Weeding, tidying, building, etc.  Should be a great weekend I thought.  Building a wicking bed, and adding another layer to the cob oven and fixing up some cracks.

Then I thought deeper about the concept of Sustainable House Day, and that one day it will not be needed.  That day would be when everyone grows their own food out of necessity, and has chooks, fruit trees and veggie patches, and lives within their means.  Whether it be because of peak oil, or climate change, or economic downturn or all three is besides the point.  The fact is that it will probably happen and I thought that I am glad that I am well down the path towards a more sustainable lifestyle before TSHTF even if it does happen in very slow motion.

Then I thought about the most unsustainable house that humans have ever made.  The news today talked about a Russian unmanned space craft that was ferrying supplies to the International Space Station.  The ISS would be in my humble opinion, the most unsustainable house in existance.  It has to truck in food, oxygen, water, and everything else that humans need to survive, and don’t even try to work out the food miles!  Yes, it may be expanding our knowledge of space and science, but the costs to maintain it must be enormous.  No wonder NASA canned their manned space program.

Then I thought about the most sustainable house.  A Yurt came to mind, and so did a Wattle and Daub hut.  Easy to maintain, weather proof, easy to heat/cool and the materials are low cost.   Very sustainable, and probably very comfortable.

I kind of went off track in my head about this time as I began to actually listen to the podcast “More Hip than Hippy“, which I enjoy on my commute and have a laugh once in a while.  Val and Dori were talking to a lady somewhere in California that gets by without a car, and who lives in the ‘burbs.  Big deal I thought, and they were waffling on and on about how hard it is.  Yes this lady’s hubby had a car, which they jointly own.  Well that is not really getting by without a car now is it.  I might as well interview Kim on my podcast and ask her how she gets by in the suburbs without a car!  Same thing really, as we only have one car, and Kim chooses not to drive at all.  So underwelmed I felt, I skipped past that part of the podcast.  People must be really attached to their cars in the US, I suppose a bit like Aussies when I think about it.

Then I started listening to the Kunstlercast, and James and Duncan were talking about the Standard & Poors downgrade of the US governements credit rating, and The Long Emergency.  High unemployment, housing prices/values falling, people just getting by with crap jobs, and not many people taking about peak oil like James does constantly, which is quite important to the US seeing they use 25% of the worlds oil resources.  A little blip like a revolution in an overseas oil exporter and they have to start eating into their oil reserves, which is dwindling all the time.  He also talked about the leadership stalemate (or lack of said leadership) and that he was waiting for some left wing equivilent of the Tea Party to start up and start doing the things that the Democrats are, in his opinion, not capable of anymore.  Sound a bit like our Green party to me.  Then I thought that things just don’t look very pretty for our allies.  However I could have it all out of context, because I just listen to podcasts from the US, and am not living the experiance.

My mind turned to transport, and the lack of a good public transport system.  Traveling on the train in the mainland capitals of Australia is very ancient Rome like.  All roads, and in this case, trains, lead to the city center.  A truly well designed rail system would have orbital lines that connected all of the lines to each other at various distances from the city center, a bit like NY, Tokyo, London, and Paris.  I remember that traveling in London and Paris when I was in my 20’s and how easy it was to get around on the Tube and Metro respectively.  All because the systems were well planned out and interconnected.

Interconnected.  I then remembered that we are all interconnected in the world, this world of Globalisation, and wondered how much longer it would last.  Cheap trade is not possible without cheap fossil fuels and now that is a thing of the past the cracks in the fabric that holds Globalisation together must be streaching hard at the seams ready to burst.

Then I pulled into the train station and traveled home in my hybrid car.  I wondered when more cars would be manufactured as hybrids or electric, and wondered when the price of petrol (gasoline) was going to get so high that people would start to abandon their SUV’s and massive 4×4’s on the side of the road because they couldn’t give them away!

It was about then that I pulled into the carport, met the dogs at the door, and gave Kim a big kiss and a hug.