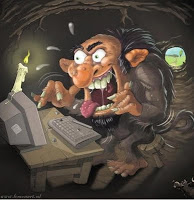 Since my last post, I have received several, quite nasty and personal attacks on my character, my earning capability, and my environmental values.  Not happy at all.

Well guess what?  I have had enough.  If certain people can’t say something nice and look at what is going on in the world objectively, then ‘bugger off’ is all I can say to them.

Sorry, faithful readers, this is not directed at you, just the trolls that frequent my email inbox and post comments.  Thankfully most of them go into the spam folder automatically, however, I still have to read them.

Hey, I am normally a nice person, I have a great outlook on life, I try and do what I think is best for our family, but it just gets me down when people cannot look beyond the present, settle on an nonfactual opinion touted by vested interest, and then attack me personally.  It just gives me the shits!

In case the trolls had forgotten what we have been working towards for all these years namely some positive action on averting man-made climate change, then have a read of this article from the Director of the Australian Youth Climate Coalition;

Ellen Sandell writes: Yesterday the Sunday Telegraph ran a headline about Tim Tams and Weet-Bix — and how Gillard would use them as ‘typical Aussie’ products that would rise only a fraction under the carbon price. Today as I open the newspaper I can see that the headlines are similar: how much will this cost? What will the compensation be? Who will be better off when we introduce a policy to put a price on pollution?

The government even has a calculator on its website where you can work out how much it will cost you (I’ll be $33 better off, in case you were wondering).

But despite the government banging on and on about the fact that Australian families won’t be worse off under a carbon price, people still aren’t listening, because we have forgotten to talk about the ‘why’.

Why are we doing this in the first place?

Many polls have shown that people are willing to pay something to clean up our environment and invest in the future, because they can see that the outcome is worthwhile. But in this climate debate we have got sucked into the cost frame and stopped talking about what we’re trying to achieve — and people won’t pay for something if they don’t understand the point of it.

So let’s talk about what is worth paying for:

Powering Australia by 100% renewable energy is worth it.

Cleaning up our skies so we can breathe easier is worth it.

Shutting down the most inefficient power stations in the world, is worth it.

Stopping our biggest polluters pumping tonnes of pollution into the atmosphere for free, is worth it.

And ensuring that our kids still have a planet to live on in the future, is definitely worth it.

The policy announced yesterday, with $10 billion of new money for clean energy projects, and increasing the government’s emission reduction target from 60% to 80% by 2050 is a really great step in the right direction, and we need all politicians to support it, because it will start getting us to the future we want to see.

Over the last week, 100 young people have been walking the halls of Parliament talking to politicians about what this policy means for their future and this video sums up nicely why the Australian Youth Climate Coalition has been working tirelessly to put a price on pollution and is happy about the announcement yesterday: because we can see what the outcome could be.

So for all trolls, get real, and bugger off! Boo Hoo if you have to pay a few dollars more each week. Here is a suggestion.  Turn off your television for a while, save some money on your power bill, and disconnect yourself from the propaganda machine. We do what we do for the future, not the old ways of the past.  Clear enough?  Bring on the Carbon Price.

So without further adieu, comment moderation is now turned on! Anymore troll like behaviour will simply be deleted and filed where they deserve to be.