As a follow on from yesterday’s post about ‘The Peak‘, I thought I would try and bust some myths about current technological solutions.  Tomorrow I will cover what we may, and indeed some folk are already doing about preparing for the coming energy decent. 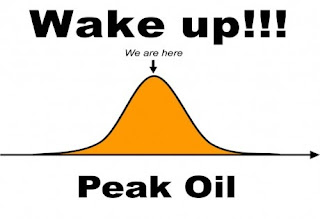 So on to the mythbusting (I feel like Adam and Jamie)

Myth 1: We will never run out of oil, we will just have to pay more for it.
Well, yes this is technically true.  However the myth is that this is used for an argument to brush aside the issue and provides and excuse not to act now.  The reason we will not run out is because the economy will not be able to sustain the price of oil scarcity and will either collapse (aka 2008), or adapt without it before we use the very last drop.  I don’t like the fact that ‘paying more’ means that ‘more’ will be up to10 times the current price.  Not only will petrol (gasoline) go up, everything else will as well.

Myth 2: We will just drive electric cars or drive less.
If we started converting all the current cars and trucks in the world it would take us over ten years, with the right amount of government focus and unlimited credit.

I don’t see much of either lately and I think that the video is a pipe dream.  If you haven’t read the news lately, the U.S. is having a bit of trouble raising the cash to pay government debt as is the Eurozone, and look at all the wonderful global political action on climate change we have not seen lately!  Anyway, what are we going to make tyres, plastic and bitumen from.  Yes folks you need oil.  We won’t be driving much if we can’t maintain the roads either which takes copious amounts of the black sticky stuff.

Myth 3: We will switch to ethanol based fuels.
I don’t think so.  Energy Return on Energy Invested (EROEI) comes into play here.  To grow the plants i.e. sugar cane, corn, soy, to make the ethanol, it actually takes about a barrel of oil to make a barrel of ethanol.  It is a no win situation.  In fact some say that it takes more than a barrel of oil to make the equivalent in ethanol.  Besides that the amount of arable land required is enormous.  I only have figures for the United States, but to fuel all the vehicles in the US with 100% ethanol it would take about 97% of the US land area needed to grow the corn!  Do you really want to make humanity go hungry just so that you can drive your car?

Myth 4: The world will stop dead because of Peak Oil.
I believe this to be untrue.  Peak oil is the period in time when the most oil is produced.  Like I said previously, the peak happened between 2004 and 2008, but we still have a few years, or even a couple of decades to act upon the issue.  The world won’t stop, but we will go from recession to depression with spurts of growth in between as alternatives are developed and not last very long.  How long the energy decent lasts is a question of how long before we switch and adapt to post-oil economy.

Myth 5: We will switch to Natural Gas and Coal
These two alternatives to oil are also fossil fuels or ancient sunlight as I like to call them.  With global coal reserves most probably overestimated, and China’s ravenous demand for the stuff, we are going to peak some time soon within the next few decades.  Demand will outstrip supply, just like it has oil.  Just one question?  What is going to fuel all of that mining equipment?  Last time I looked the trucks, excavators and the trains used to ship it to port all ran on diesel, which is made from oil, and don’t start me on bio-diesel!
As for natural gas, Australia’s supply is sold overseas to whoever is willing to pay for it.  Transporting gas cost 6-10 times the equivalent for oil, with LNG being the most expensive.  Compressing gas requires a lot of energy.  Production decline one is starts tends to be steeper for gas than for oil and production has already begun in the UK and Europe, and North America.  Russia is the only country propping up the rest of Europe with it gas reserves, which are expected to decline in the next decade.

Myth 6: Australia has Natural Gas for over 100 years.
Not quite so.  I found this paper titled ‘NATURAL GAS – “MAGIC PUDDING” OR DEPLETING RESOURCE.  A dissertation on the state of Australian natural gas‘ by B.J. Fleay B.Eng., M.Eng.Sc., M.I.E.Aust., M.A.W.A. August 2007.  It is an eye opening paper.

It states that for Eastern Australian Gas;

And for Western Australia;

So not much hope for sustaining the older conventional gas fields in Australia, with heavy reliance on Coal Seam Gas, the offshore NW shelf and Gorgon fields and fracking.  Not a good outcome I fear because EROEI comes into play here as well.  As oil depletes and prices rise, it will cost more to extract the natural gas.  The price of extraction may outweigh the price they can effectively sell it for.  Once again China’s appetite for LNG will force extraction to double or triple, therefore depleting quickly.

Anyway, that is enough myth-busting for one post.  You can now see the scale of our dilemma which I hope paints a picture, but not too bleak.  Like I said yesterday, there is hope if we begin to prepare.

Tomorrow, I will write about energy decent and some solutions for a post peak world.

Credit goes to the following sites which have been a wealth of information for this post and who’s concepts I have tried to explain in my own words: