Have you ever been so busy that it hurts?  Well this week I have discovered that being a lot more active comes with a challenging result.  That is the return of pain!  Thankfully nothing I can’t handle, as it is just my body repairing itself.  I feel great other than that little issue.

That aside, I have been working on my favourite hobby of cheese making as you have probably gathered from the last few posts, and doing a fair bit of gardening that I have really missed for so long.

We have been meaning to dig out a tree stump out of the front orchard for such a long time, and thankfully I managed to corerce my daughters boyfriend Jake and Megan into helping me get it out of the ground.  Well to be honest, they did the majority of the work.  It took a good hour to remove the stump but once it was out, the hole was massive, which we gave to the chickens.  They loved picking out the worms. 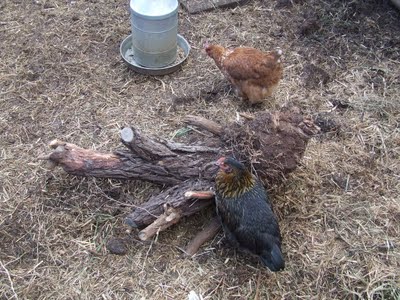 I have been meaning to get some olive trees into the ground as they dry out so quickly in pots so this was the ideal opportunity to get at least one of the three olive trees that I have into a new home.  I think it will like it there. 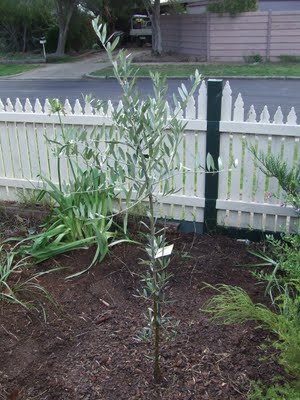 Then I removed the chicken wire from around a rosemary bush that I planted in the chick run about a year ago.  I wanted to make sure that it had a well established root system so that the girls would not dig it out.  Once I removed the protection, they found every single worm and weed that had grown around it over the past year.  It was fun to watch them getting stuck into it. 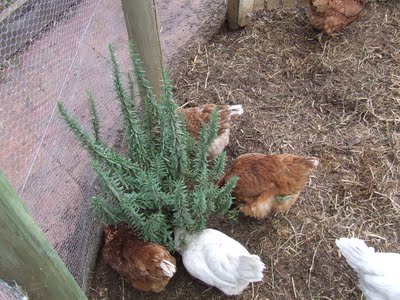 Last Friday, I made a Farmhouse Cheddar.  Here it is drying below.  It is so simple to make that it is a crime not to make another and film a tutorial for you to watch.  That is the plan for this weekend. 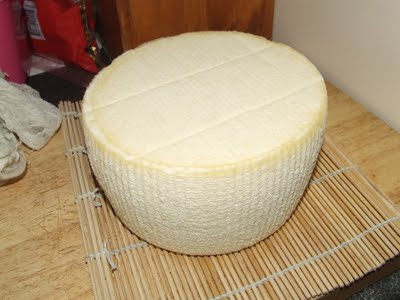 Back in late May, I was invited to a friends house to pick some olives that she had an abundance of.  Kim and I picked a big 4 litre icecream container full, and I used a different method to cure these ones.  I made a brine with about 10% salt and soaked the olives for just over 5 weeks, changing the brine once a week.  I started to taste them at the 4 week mark and found that after 5 weeks the bitterness was starting to abate.  Just before six weeks were up, I made up a final 2 litres of brine, added two tablespoons of vinegar and bottled them up as the photo below.  To seal them from the air, I poured over a layer of olive oil, which you can probably make out.  They taste delicious now, but I am going to try them again in two weeks. 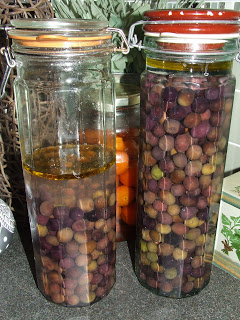 So how did my first set of olives go?  Well they were mainly green and so large that I had to put a cut in each one, and I only used fresh water to remove the bitterness.  They taste so good that Ben and I finished off this small jar of olives shortly after this picture was taken!  I am very impressed with the flavour. 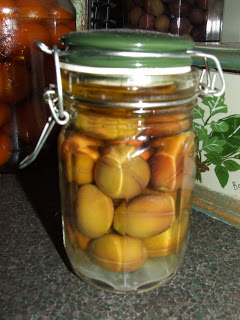 On Tuesday, I had the urge to make some Parmesarn after some fruit loop left a comment on my YouTube tutorial saying;

“This is not even Parmesan. Parmesan reggiano is made﻿ completely different and it’s aged for 2 years. This stuff is crap,don’t be cheap and buy the real thing. Even the Parmesan that comes in shakers is low quality.”

With my reply being;

Quite frankly, if you can’t say something nice, don’t say anything at all.  Well that is what my Nana taught me anyway!  Provercation aside, the Parmesan is easy to make, and very, very tasty after just 10 months of maturation.  I have left one for 12 months and the flavour improves even more, but because the round is only 1kg, it starts to dry out if you leave it much longer.  I am going to wax this one which is shown just before I added the brine for 24 hours. 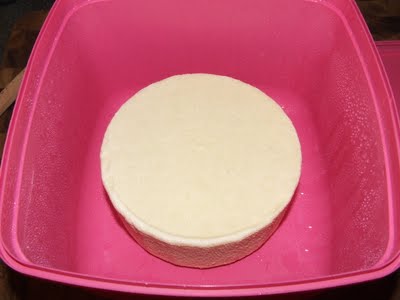 Now I have some bad news.  The Camembert that I made recently was a flop.  Because I stored them in the normal fridge to mature, they did not develop their traditional mould rind.  They started to flop and run instead.  I should have put them into the cheese cave for the first 14 days then put them in the fridge to mature further after I wrapped them in cheese wrap.  That is 6 hours down the drain and 8 litres of milk.  Not to worry as the chickens will get a treat over the weekend.  Nothing like a bit of extra protein!  This picture was take about 4 days ago, and they are much worse now.  Think of oozy runny stuff all over the cheese mat.  Yuck, it reminds me of the Blob.  Better luck next time I hope. 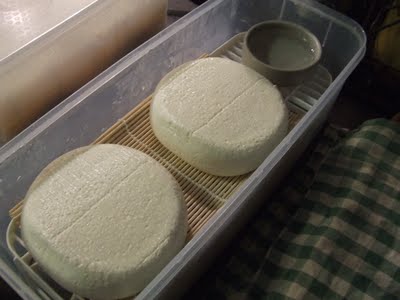 Other than all of that, I received a call from a producer at the 60 minutes TV show, who was doing some research about “Where does your food come from”.  I helped out where I could, but don’t think I will be offered a stop on the show for this story as home grown has been done to death lately on TV on current affairs shows on the commercial networks.

On Tuesday, I sent off our application form to enter our home in Sustainable House Day again this year, which was accepted.  It is being held on Sunday 11th September 2011.  We are planning a big local media campaign this year and hope to double the number of visitors.  Luckly I have lots of willing volunteers to help out as always.

Also, I had an assignment due for my Diploma of Carbon Management yesterday, which I finished off at the 11th hour and presented today (I passed the assignment).  Today and tomorrow I am at Uni doing my next workshop for the diploma.  It was great fun to see all of the other course members today, and the Instructor, Tony actually mentioned that he stumbled upon my blog when searching for information about raw milk, which he now buys for his family.  It is amazing who actually reads this blog, and how it has become a knowledge base for many others to refer to.  It is humbling and flattering all at the same time.

All in all, a very busy boy.  Rock on the weekend!  Oh, I just forgot that I am hosting a Moon planting workshop on Saturday at my house for the MSLG.  My friend Jan (hi mate) is presenting as she is a qualified Permiculture person.  Never a dull moment in this lifestyle!  I love it.