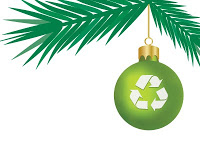 A very green Christmas to one and all.

Thanks for reading The Greening of Gavin during 2010.  We are taking a break for the next few days to spend time with family and friends, so I will be back just before the New Year with my end of year wrap-up and 2011 goals.

For those who celebrate Christmas, here are some last minute gift ideas from an article I wrote for the Caroline Springs Community update, that have a fair-trade and anti-consumer bent.

The Festive Season is all about giving, but in this day and age, things seem way too out of control for me, without any end in sight. I know I am stating the bleeding obvious, but when they start bringing out the Christmas decorations in department stores during the month of October, you really know that things have just gone too far. The blatant commercialisation of the holiday season has been getting longer and stronger each year. As you probably know if you have read my blog, I am against consumerism for the sake of it, which I and many others have labelled as Affluenza.
So here are a few ideas that will help get you off the consumeristic treadmill. Kim and I decided that we wanted to buy gifts that last, and gifts that either help others who produced them to get a fair deal, or give to those who really need our generosity.
Firstly, we choose only fair trade products for each other. Yes, I know that there are an incredible amount of transport emissions because mainly these gifts come from overseas, but I wanted to support the fair trade movement and not some giant corporation. We bought some of our gifts at New Internationalist Fair trade shop on-line. Use your favourite search engine to track them down. Not only do you get a great product that is built to last, you guarantee a fair price for products that are not a handout, but also helps encourage self reliance within that community. We have also bought some gifts at the Oxfam shop (www.oxfamshop.org.au) which is also sells fair trade goods. So we bought minimal gifts with all proceeds going to people who most need our money. The quality of the products is outstanding and you know that these handcrafted items have been made with care and attention to detail.  Oxfam also have a program called Oxfam Unwapped, which is kind of like the program that I am about to describe from World Vision.

Secondly, instead of going absolutely crazy with gifts you can give a gift to someone who really needs it. World Vision has a campaign called Smiles, whereby you visit their website and buy a gift for someone else in need! What a fantastic concept. You can buy something as small as water purifications tablets for $5, or a house reconstruction kit for $1345! From mozzie nets to chickens, ducks, pigs, goats, donkeys or cows, the gift ideas are massive.

So how does it work? Do World Vision pack a goat in a box and ship it overseas? NO, that would be cruel. So, if you buy a duck or a market garden starter pack, for example, your contribution will go towards their agriculture and environment work to help communities grow food for families and restore and improve their environments. Or if you buy a mosquito net or a toilet, you’ll be contributing to their work to help communities gain access to basic healthcare, water and sanitation. You also receive a card which you give to the reciepient, to let them know about the gift you have chosen.

So this year, think outside the box you live in, and consider some of these options to help those who, without your help, will probably go without the simplest of life’s necessities, let alone a present this festive season.

The choice is yours alone. You can give socks and jocks to someone who has everything, or a present that really means the world to someone. I reckon they are not only suitable for last minute gifts, but for corporate presents as well! What a great Chris Kringle present to give a work colleague.

Green seasons greetings to one and all,

“It is not the strongest of the species that survives, nor the most intelligent, but the one most responsive to change.”- Charles Darwin

Some will adapt, many will not, because to adapt, you must see the change coming!

I overheard this on the train this morning.   “A white Christmas in Australia.  That’s funny! (laughter heard)”.  My thoughts at the time were “That is bloody hilarious love, but that is climate change for you, and you still have no idea what is coming down the line.”

It was as if climate change was a forgone conclusion, with no action required.  Just go for the ride, so to speak.  Well, I suppose in a way it is.  With 2 degrees of warming already locked in and tipping points rapidly approaching, the train is unequivocally heading towards the end of the tracks at a runaway velocity with no-one at the brake lever to slow it down.  Heads up their arses or in the sand.

After a record spell of drought in many parts of Australia, we now have floods and torrential rains, and even snow in the high country only one week before Christmas Day in the south eastern part of the country.  Now snow in December may seem normal to those readers in the northern hemisphere, but it is far from a normal climactic pattern here south of the equator in Summer no less.  We should be dressing shorts and sandals, having barbecues every weekend!  I have never seen it so cold here in summer.  To put it in perspective, this time last year we were swimming every day, eating tomatoes, and having fun in the sun.  Not so this year.  All winter crops have gone a month or two longer than normal, spring planting was delayed due to the colder start to spring.  With yesterday being summer solstice here in the south, the climate is anything but normal or summer like.

The seasons have been progressively moving out of kilter by a few months.  This article in The Age newspaper titled “Facing the hard local realities of a warming world“, really struck home with me, and confirmed what I have been observing all around me.  Adapt or not, that is the question.

In relation to this issue, I feel helpless.  I can see the changes and am trying to do something constructive about it, but most around me don’t give a shit, nor look like they have the same sense of urgency about them as I do.  Maybe I am either ahead of my time, or just plain wacko?  As for the UN climate talks, it looked like rearranging the deck chairs on the Titanic.  Too little, too late, or in my own words I liken it to pissing into the wind.  Do it long enough and some will splash back on your legs!  Guess what folks, it is now splashing back and we are having a lot of trouble stopping the flow.

What hope do we have, when all I see is hopelessness and inaction?

Well, I will tell you what gives me hope.  People who read this unusual blog give me hope because I realise that you are here because you want to learn how to make simple changes to your lives, and of course you put up with my ramblings.  If I also make some kind of sense, then I will take that as a bonus!

I gain hope when new members join our local sustainable living group, so that they can learn survival skills and want to help educate others.  My children give me hope, because I know that they understand that it will be them who have to continue the work long after I am gone.  After all, they are the generation to come that I talk so often about.

Hope comes from people like you and I, who make this issue personal to our friends and family, who then take actions themselves.  We are all influential in our own special way.  What we do and say matters to them.  Making it personal is a powerful motivator.

We just have to influence faster.  Spread the message of hope and the message that we can change behaviours for the better before tipping point happen.  Tell friends and family about the great personal sustainable living actions that you have taken, even if you don’t think it is important in the grand scheme of things.  Trust me, your actions are important to you and to them.

Together we can lower greenhouse gas emissions below 350 part per million, where it should be.  This is the challenge I put to you, my readers.  Act now, tell others about the solutions, and together we can adapt not to the effects of catastrophic climate change, but to a better way of living.