Today we talk to Ben about our chickens and what he likes about them.

I hope to make these a regular event again, now that things are slowing down for the year.  If you have any podcast suggestions, please leave a comment below.

Listen to the Episode Below (00:04:34)
Download Listen in a New Window iTunes Stitcher SoundCloud Leave a Review Clammr It Subscribe via RSS Subscribe on Android RSS Patreon

I have a free weekend coming up, which around here are far and few between.  I will dedicate the entire weekend to cheese making.

Yesterday, my order of annual cheese goodies arrived in the post from Green Living Australia.  Here is what I ordered. 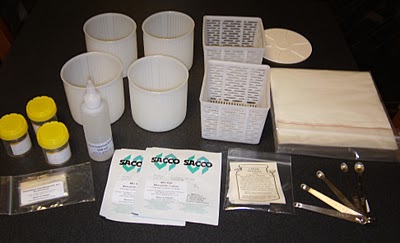 I am going to make a favourite, Caerphilly, for a work lunch we have coming up in mid December.  Everyone is bringing a dish they made at home.  I took along some Pepper Jack last year with a jar of home made Branston Pickles, and it was a great hit.  It was devoured in 15 minutes flat.

It has been so long since I made Feta, and am hoping that a different recipe and the square baskets will help me perfect this wonderfully simple cheese.  Fantastic for all the Greek Salads that I can grow greens for!

The cheese hoops, Penicillium Candidum and cheese wrap will be used to make Camembert.  I chose a milder mould than the one I already have.  Hopefully it will result in a milder cheese that doesn’t get extremely pungent after 4 weeks of age.  The cheese wrap should help mature it slowly.

Finally, the creme fraiche culture will be used to turn cream in to a smooth and creamy cheese that is often used in deserts in Europe.  Kim tells me that she just loves this stuff, so we will see how it turns out.

All this in two days?  What do you reckon my chances are?  Three cheeses and filming for video tutorials as well?  Well lets just give it a go and see what happens.

Our rainfall this year has been 466mm (18.34 inches) of rain to the end of October.  This is what it looks like in a graph, and you know how much I love a good graph!  Click to enlarge, and you will see that our rainfall has been above average for most of the year.

So what sort of impact would this have on our district, seeing last month was the wettest October since 1983?

Well, here is a good example.  My good friend Daryl O’Rourke took these following photos of Melton Reservoir, where the rainfall is measured. 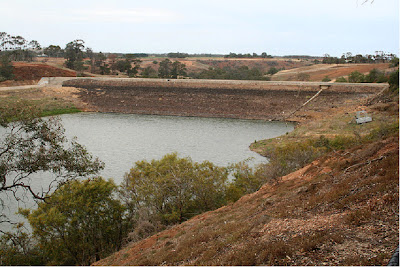 The above photo was taken in 2009.  It shows how low the water was against the dam wall.  Look how dry it was!  13 years of drought will do that to the landscape.  Even native flora was struggling.   To the left of the picture is the spillway, which is not even close to being reached. 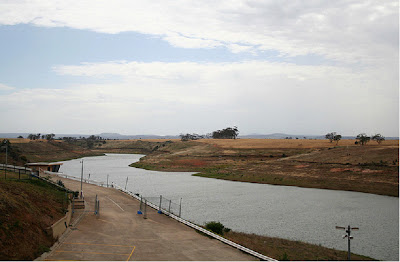 Just to get some perspective, you can see the normal level of the against the landscape.  Also taken in 2009. 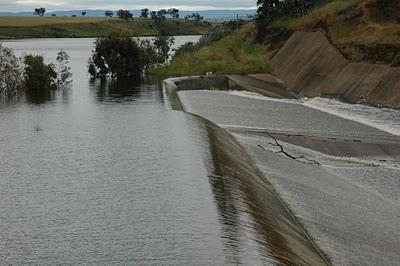 This is the same reservoir, and water going over the spillway. 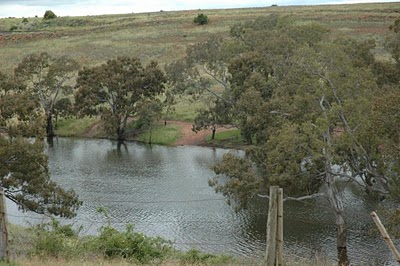 Note the high water mark now.  Even the trees that had crept down the banks over the years to reach the receding water level are now underwater. 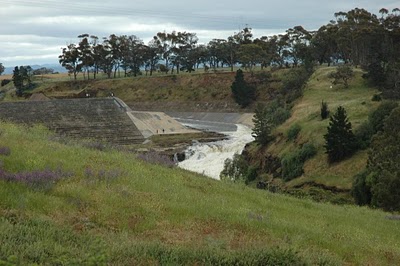 On the other side of the dam wall, the water rushes down the Werribee River.  An amazing sight indeed.  Green native grass springing up all over the place.  In fact so much grass the this has been the worst year for hay fever that I have ever experienced since living in Melton.  I hate these itchy eyes, sinus headache, and runny nose!

Another example is that our tanks are full, as is the swimming pool, and now I am just dumping water onto the ground instead to store the water.  However every time it rains, the water just turns into a river and floods my beer shed.

So will this cold and wet trend continue?  Well according to the Met Bureau the Summer Seasonal Outlook goes something like this;

“The pattern of seasonal temperature odds across Australia is a result of warm conditions in the Indian Ocean, as well as cool conditions in the equatorial Pacific Ocean associated with the current La Niña.
The chance that the daytime temperatures will be warmer than the long-term median maximum temperature for the December to February period is greater than 60% over southern New South Wales and in the south of the South Australian pastoral areas, with the odds strengthening to greater than 75% over all of Victoria and South Australian agricultural areas. This means that out of every ten years with ocean patterns like the current, six to eight years would be expected to be warmer than average for this summer.” 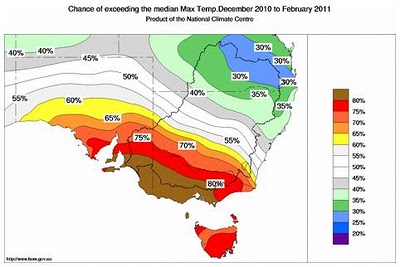 So it is going to be a warm one this summer.  With all this incredible growth of native grasses throughout the SE of Australia, which will soon dry out when the heat hits, I dare say we are in for one hell of a bushfire season.  At least we have more water than we usually do, however I fear that this year is just a one off, and the warm dry climate that we have grown accustomed to over the last 13 years will continue.

Better get another rainwater tank or I won’t be growing any food in the longer term me thinks.  This rain won’t last.