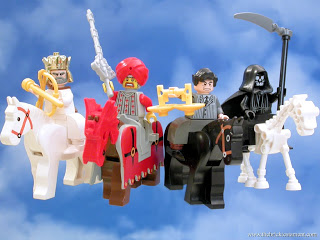 I often mention The Four Horsemen in some of my posts, which I use as an analogy for societal collapse.  I am not a religious man and you can believe what you want to believe, however according to Wikipedia, the Book of Revelation, chapter 6 describes them as follows;

“Jesus Christ opens the first four of the seven seals, which summons forth the four beasts that ride on white, red, black, and pale-green horses symbolising conquest (or pestilence), war, famine, and death, respectively. The Christian apocalyptic vision is that the four horsemen are to set a divine apocalypse upon the world as harbingers of the Last Judgement.”

I am not a big fan of the horsemen, and hope they never, ever, come riding over the hill.  So that leads me to the subject of this post.  One of the comments on my last post was left by Samantha in OZ who said;

I’m very curious to know, when “the four horsemen ride over the hill”, where do you imagine you will be buying the chicken feed, lye, olive oil, coconut oil, etc that your soap making and egg production depend on?

If the supermarket is no longer selling soap, why would it still be selling industrially-produced soap-making ingredients such as lye and olive oil?

I mean no offence by asking these questions – I am genuinely keen to understand your line of reasoning (which is obviously shared by very many people).”

Thanks for your comment Samantha, and no offence taken.  You pose a great question, and here is my line of reasoning.

You are absolutely right that supermarkets will be the first to run out of supplies in the event of a crisis.  We have seen how fragile our ‘just in time logistic system’ can be, and I described such an events in my post, Nine Meals from Anarchy.  This post describes events that may happen when the oil crunch eventuates, and ways to prepare for these types of disruptions.

As for your specific question, lets look at them one by one.

Chicken feed.  Chooks eat seed bought from the feed store that is true, however they do eat many other things as well.  They eat greens, kitchen scraps, worms, bugs, cockroaches, lawn clippings, meat, and just about anything else you throw into their yard.  I am sure that if push comes to shove, I will be able to muster up enough free feed for my little darlings, and if I can’t, I will just have to thin the flock, thereby producing a few good meals for my family, until they get to a manageable flock size where I can feed them.  This will be a last resort, as the eggs are far more valuable  as a reliable source of protein, rather than their meat.

Lye.  The Romans made soap over 2000 years ago, and they produced lye by pouring water through wood ash filtered through straw.  I have been doing a bit of research and came up with this cool link on how to make your own lye at Wikihow.com.  It looks fairly simple, and I have a few large plastic buckets with taps that will do fine for the barrel.  I also have a few neighbours who have wood burning stoves, so getting wood ash will not be a problem in the short term.

Oils.  Soap can be made just about any oil or fat.  We have quite a few olive groves around here so in the short term getting olive oil would not be an issue, however in the longer term I would resort to tallow which is rendered animal fat.  It makes a hard, but usable soap, and once again very similar to the type that the Romans used to make.

These three examples aside Samantha, you highlight something that people should have a good think about.  Other ways I have prepared is to educate my family to better understand what may be coming down the track, and teach my kids the skills to grow their own food, be independent, think for themselves, and be able to build things from scratch.  I have collected quite a few how-to books myself that have helped me learn to do some of the projects around my home like basic carpentry, build a chook house, build garden beds all with hand tools.

Also, I believe that self sufficiency is a myth.  You need strong communities with various skills to see you through.  I hope that in my small way, I have taken steps towards building those communities but still have a long way to go.

So, what would you, the reader, do if the supermarket shelves became bare after a disaster, whether it be for a short term or a longer, prolonged period of time?  Could you cope, and are you prepared?  Think not only the physical, but mental preparation as well.  It may or may not eventuate in our lifetime, but I am just as curious as Samantha.  Let me know in a comment about some of the simple things you have done to prepare for unforeseen (or foreseen) circumstances that maybe well outside of your sphere of control?