This post is in two sections.  The first discribes the stages of change in humans, and the second are my observations about the state of Climate Change denial in the Australian media.

Change is a funny thing. Some people embrace it and find it exciting, while others resist it with their very last ounce of strength.  Why is that so?  Why would humans rather endure a status quo than change.  Usually, the change happens when they realise that the pain of the status quo is a worse place to be than the change itself or new reality.

Lets dig a bit deeper to discover the emotional stages that happen when humans are confronted with a change.  The diagram below  is a seven-stage adaptation of the five stages of grief identified by Elisabeth Kübler-Ross, the acknowledged expert on grief and bereavement. Following publication of her book “On Death and Dying (1969)”, it became clear to practitioners that the stages in the grief model were transferable to all personal change and had a far wider relevance than just to death and dying.  So, based on the evidence that all change contains some sort of loss, her model is used to this day to map where an individual is at any given stage of a change that is affecting them.  (Click to enlarge) 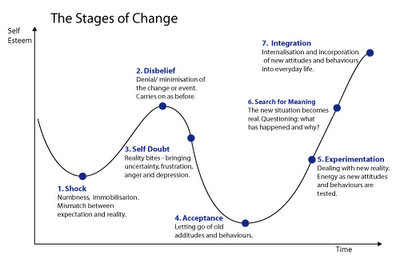 Now, although the stages are fairly consistent for each change you may experience, the speed at which you move through the stages varies from person to person.  You could fly through the first two stages, and get stuck in self doubt for ages before you finally accept the change, or you could whiz through to Experimentation in just a day.  It all depends on how expectant your mind was for the change.

Let go through each stage:

Shock.  This reaction is usually immediate or from experience, within a few hours.  Even if you have planned this change, the fact that it is actually upon you will give you a strange feeling of disorientation.   This stage will last longer if it is unexpected.

Disbelief/Denial.  Stage two.  You have usually managed to get back to everyday life at this point.  Intellectually, you know that the change has happened and what may happen, however emotionally, you may block out the new reality from daily life.  You will probably be processing this new reality in your sub-conscious mind. Cognitive Dissonance usually occurs at this stage, and you are more likely to get stuck in this phase if you are change resistant.

Self doubt.  This is a very uncomfortable stage.  Old habits and beliefs are no longer relevant, as are some of the things that used to be important to you.  Your sense of identity will be shattered.  You feel a sense of nothingness until you develop a new way of ‘being’.  Your confidence will be low, and you may be fearful of the future, become angry, depressed, and have an overwhelming sense of guilt.  I have felt doubt as to whether I have made the right decision or whether I am up for the job.  You also may want to seek isolation to mull it over further, and at the same time feel unmotivated.

Acceptance.  You have come to the decision to accept the change and face the future.  By letting go, the pain goes away and finding your new way of being becomes exciting and a challenge rather than a loss.  Your energy levels will be going up, as this stage usually begins just after rock bottom on the emotional scale. You still might not know what you are going to do, but at least you know that your reality has changed.

Experimentation.  You try something new from the new paradigm, but don’t be surprised if you can’t stick to the plan.  You could be all over the place, trying little changes to fit with your new reality.  You will still be working it out in your mind, however your energy levels continue to rise.  Try little things before attempting any major change at this stage, because you may slip back to self-doubt if a large experiment goes pear shaped.

Search for meaning.  When you have embarked on your journey towards your new reality, you may start to appraise where you were before the change, what has happened since and why.  You will begin to fit your experience into your “life story” and reexamine your view of yourself and the world around you.  You will start to make sense of it all.

Integration.  At the end of the change process, and all being well, you will be comfortable and confident, feeling you belong or seek belonging in your new life.

Now just a realisation on my part.  Change may be difficult at times and for a long period, but it can also be exciting, energising and uplifting.  It is a part of life.

Also remember that just because there is a model does not mean that everyone will experience all stages or the same change in the same way as others.  Every person is different and the above model is for guidance only.

This brings me to the subject of Climate Change and the human mind.  You can probably see where I am leading with this little phychology lesson.

I remember that when I discovered about anthropogenic climate change, I went through the first three stages in the period of about four hours.  By the time I have watched An Inconvenient Truth, and walked back to the office, I was well into acceptance, but still dazed and confused as to what action I needed to take.  This entire blog is a testament to my acceptance and steps 5, 6 and 7 of my change.

Now, I have noticed of late that some media outlets have been a party to the second stage of change which is denial.  For what purpose, I don’t know, but I have a few theories.  This has especially ramped up after the Climate Gate scandal, and the failure of COP15. They (certain newspapers, and networks) have been performing a smear campaign of climate change denial on a grand scale, attacking the overwhelming mountain of evidence that the world’s climate systems are indeed changing rapidly and that we, humans, are the major cause of this change.  The attack has been relentless and daily. 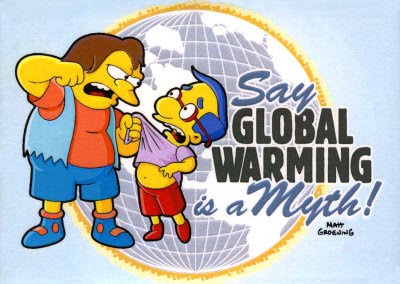 So, due to the acidic introduction of self-doubt in to the minds of the many, where is the collective consciousness of the Australian people now?  The early adopters of the new reality remain steadfast.  Those that are part way through the change process may remain stuck in denial and self-doubt for some time longer.

But there is light at the end of the tunnel.  Finally, after two months of constant bombardment of climate change denial, mainly funded by vested interests, the CSIRO and the Bureau of Meteorology, which contains some of Australia’s premier climate scientists have stood up to these bullying tactics and have simply articulated scientific fact in a way that the average Joe was able to understand.  I quote from ABC On-line.

The head of the CSIRO, Dr Megan Clark, says the evidence of global warming is unquestionable, and in Australia it is backed by years of robust research.
Dr Clark says climate records are being broken every decade and all parts of the nation are warming.

“We are seeing significant evidence of a changing climate,” she said.
“If we just take our temperature, all of Australia has experienced warming over the last 50 years. We are warming in every part of the country during every season and as each decade goes by, the records are being broken.
“We are also seeing fewer cold days so we are seeing some very significant long-term trends in Australia’s climate.”
Dr Clark says the long-term data across a number of measures stacks up in favour of climate change proponents and against those who say the planet is not warming.

Great news, but not new news to this little black duck.   I am well through the change process insofar as Climate change goes.  Here is a quick fact that I learnt during my ACF GreenHome Community Leaders training.  Face to face communication is the best way to pass on information.  Deep down, I kind of knew this tit-bit of information.

So therefore, even the statement by the CIRSO and Met Bureau, even written in laymans terms and expecting people to react to the information in a positive way is certainly not the best way to get the message across.  Even this blog post has its limitations and may not be fully digested.  As I stated, the best way to pass on information is to have a conversation.  It doesn’t need to be confrontational at all.

I find that often the best way to get the other person to begin to understand the new reality and maybe begin to act upon the information is to mention something you may have already done yourself.  It could be something as simple as discribing how much money you have saved a quarter on your electricity bills by means of energy efficiency, or it could be about the garden you maintain and the benifits of home produce, or it could even be the gift of jam that you made yourself!

When these conversations come from the heart of a personal friend or trusted colleague, the recipient comprehends these action in a far better context to climate change, than say, shutting down Hazelwood power station by launching a protest and shackling yourself to the front gate.

The quicker and more frequent we have these simple conversations, the faster we will be able to sow the seeds of change in a rapidly warming, and soon to be resource scarce world.  The personal aspect of these simple yet powerful conversation is what I believe make it such a convincing method of communicating a message with the view to prompting someone to question their own status quo and begin the change process for themselves.  You cannot get much more personal than talking to a small group of people, as it is kind of in your face!

So if you are inclined to talk to your friends and family about climate change or any change for that matter when you are finished reading this post, go ahead and site the basic scientific facts, but make sure you articulate the actions as personal ones, that give hope and make them feel empowered to do more and challenge their norm.

This is the only way we will be able to collectively make the changes necessary to make the world a more liveable planet for future generations to come.