Ever since last Thursday, Italian food or better put, the preparation of a Mediterranean diet has been occupying the house of GOG.

Another batch of Pesto was whipped up by Sis and I on Thursday afternoon.  We had to wait until after the thunderstorm which dumped 35mm in an hour to abate before I ventured out into the veggie patch to harvest the three remaining basil bushes.  I respected nature and didn’t want a bolt of lightning to ruin my life. We spent the next hour stripping all the leaves and filled up a 3 litre bowl.  Kim Sis and I, all working for our dinner!  What a way to muster up an appetite.  We then had to wait for the electricity  to come back on so we could make the pesto in the food processor.  Sometimes I wish we had a mortar and pestle to by pass the need for a blender.  We managed to make four meal sized portions that would serve 4 people with each portion.  The first batch was mild so that Ben would eat it, hoever the second batch accidently had more garlic and even a rouge dried chilli.  Very nice indeed. I cooked up some locally made penne, topped with two generous tablespoons of pesto on each bowl and sprinkled on some finely grated Pyrenees with green peppercorns.  It was a wonderfully simple, yet tasty meal.

We finished off the evening with the company of my friend David, as the Sustainable Living Group were scheduled to have a movie night at my place showing “No Impact Man”, but unfortunately, most of the trains from Melbourne were cancelled so many member rang and gave their apologies.  Not to worry as the wine and conversation began to flow and a fun time was had by all.

Friday.  Work.  Need I say more, uneventful but mentally draining.  That evening we had a fish bake with garlic potatoes, tomatoes and celery from the garden topped with salsa.  Kim had excelled in the kitchen as always.  All finished off with some home made mint choc-chip icecream.

Saturday.  Busy, busy, busy.  Off early to Bacchus Marsh for fresh produce where I scored a 10 kg box of local tomatoes for $10.  They were overripe, and just what I needed to make passata.  We also bought some more cider vinegar and other local fruit like plums, peaches and strawberries.  All are near the end of their season, so I am starting to buy in bulk and preserve and make jam.  I then took Sis, Kim and Ben on the cooks tour of the area, and even saw parts of the Marsh that I had never been to.  On the way home I stopped at Merrimu reservoir, which used to be the sole water supply for Melton.  Even I was shocked by the sight of the current level of water.  It was nearly bone dry, however I found out later that the water company had taken the drought as an opportunity to increase inflows into the creek on the other side of the dam wall and to effect repairs at the same time.  Not that I think that the reservoir will ever be at previous levels again.  It is a good thing that we are now connected to the main Melbourne water supply by pipeline as our taps would have been blowing out dust long ago.

Home again and after a quick lunch consisting of anti-pesto, in the form of home baked wholemeal bread, Basil pesto, three types of cheese (Shaved Parmesan, Stilton, and PepperJack), my pickled onions, cherry tomatoes, and olives.  It was a delicious spread an mostly home made or grown in my garden.  Here is some of the Parmesan that I finely grated and is now stored in the freezer for when the occasion warrants its use.  It smells better than the bought stuff. 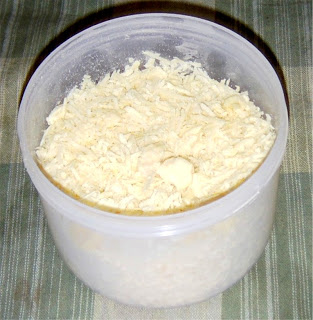 Then it was off to work in the kitchen.  After studying my cheese book, I decided that I would give Romano a go.  I won’t go into the process, but suffice to say it is very similar to making Parmesan except that you use whole milk in Romano and semi-skimmed in Parmesan.  The Romano should have a richer flavour than Parmesan with a softer texture.  It still has to mature for the same amount of time, so I will be leaving it in the cheese cave for about nine months as I did with the Parmesan.

I walked Sis through each stage of the cheese making process, from sterilisation to pressing, explaining the tricks that I have learnt along the way.  I even tried to show off and use the whey to make ricotta, however my plan backfired because I forgot that because the curds had been cooked at a higher temperature than a normal hard cheese there was not much milk solids remaining in the whey.  Basically there was about 2 tablespoons of ricotta at the end of the process which I gave to the appreciative dogs!

Once the cheese was in the press at about 1630, I turned my attention to the box of tomatoes.  I found a passata recipe that called for 1.5kg of fruit so I quadrupled the quantity.  I peeled 6kg of tomatoes in two batches after immersing the fruit into boiling water for 3 minutes.  The skins came off easily but it was time consuming.  An hour later, all the waste was disposed of into the compost bins and the tomatoes were in a large stainless steel pot (8 litres).  Here is the method that I used to process the passata.  I have listed the ingredients in their original quantities: 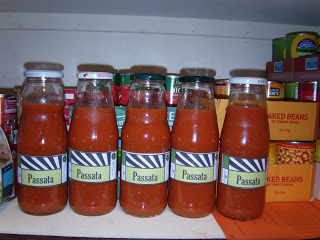 Pour into sterilised bottles/jars, seal, and water bath for 25 minutes at 93C.  Label and enjoy during winter when tomatoes are a distant memory.  The added vinegar increases the acidity of the tomatoes to stop botulism.

When quadrupled, this produced 7 x 700ml bottles of passata which should last for a few months.  I am hoping to score another box of tomatoes to process this weekend as we us a lot of tinned tomatoes in our cooking. 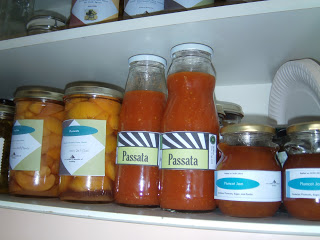 In between all this activity, Kim whipped up dinner which consisted of a jacket potato topped with butter, home made cheese, garden fresh cherry tomatoes, cucumber, and celery.  This type of meal has become the fast food in our diet when we don’t have much time or couldn’t be bothered with anything to elaborate.

That’s about where the Italian food finished for the weekend.  Sunday, I cooked onion bhajhi and chicken Rogan Josh then Chickpea curry on Monday night.

But what a great few days of gastronomic delights and it was rewarding to share it with family.  To get a different perspective on the first few days of my sisters visit check out her post titled “It’s Happening“.