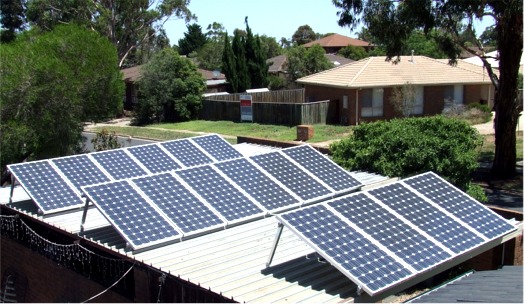 There are a couple of good news items today on the renewable energy front.

Firstly, the Feed-in Tariff Petition for a national gross tariff of 17,000+ signatures was tabled in the Senate yesterday by Australian Greens Senator Christine Milne.

Here is an extract from a press release I received from the petition organisers.

Independent MP for Lyne, Rob Oakeshott, will also announce he will introduce Senator Milne’s Private Member’s Bill for a feed-in tariff into the House of Representatives.

“I’m thrilled to be tabling this petition today which shows the extraordinary level of public support for renewable energy and the best policy to bring it on.” said Senator Milne.

“It is time the Commonwealth stepped in to introduce a real scheme that will pay a premium rate for all energy generated from all renewable sources and technologies.”

“The Government is bending over backwards to provide certainty to coal, but seems determined to undermine any certainty for renewable energy.”

The petition was initiated in response to increasing calls from Energy Matters customers for a national gross feed in tariff scheme and the slow progress on the part of the Australian Federal Government in rolling out such a program.

According to Energy Matters spokesperson Andrew Scarlett, “Climate change caused by carbon emissions is a serious threat. The government needs to reduce its reliance on destructive fossil fuels and encourage uptake of renewable energy.

“We know gross feed-in tariffs boost renewable power and create lasting jobs. They are a tremendous opportunity, both environmentally and economically. Instead, we’re committing public resources to antiquated coal technology that makes us the worst per capita polluters in the planet. Australians have a right to expect leadership from their government on this critical issue.”

I am proud to be one of the supporter of this great initiative, and wrote about it earlier in the year in a post titled “Gross Feed-in Tariff Petition“. Well done everyone who signed the petition.

The second good news story is that the Victorian Parliament has finally passed the states net feed-in Solar PV tariff though its upper house. It is now up to the lower house to approve the small changes and then onward for signature by the Governor. Below is the email I personally received from the Hon. Peter Batchelor;

Once the amended bill is approved by the Legislative Assembly and the Governor, it will be law in Victoria.

Victorians will be able to access the fairest and best Feed-In Tariff in Australia.

It is important to note that in response to responsible environment groups and community feedback the final bill includes the following changes including an increase in the size of system that is eligible under the scheme (now 5kw up from 3.2kw) as well as the inclusion of community organisations and small businesses with energy consumption less than 100 MWh a year.

It is also the only scheme in Australia that has built in safeguards to ensure the scheme’s cost to Victorian electricity consumers will not exceed $10.

Please find the attached media release that announces the legislation.

I have also attached two letters which confirm that AGL and Origin Energy will pay customers for any credit they accrue.

Wasn’t that nice of him (not). I am glad that I added preasure to the Legislative Council, asking them to include small business and community groups, and to raise the eligibility to a higher rating. It is only the saving grace and sense of fair play from the two mentioned energy retailers that will make the scheme effective at all. I am glad I am already with Origin, and will be taking up the deal when the legislation passes. I am even willing to pay for a bi-directional electricity meter, which should pay itself off in a few months.

About bloody time we had some good news on the renewable energy front! This may just start to make a difference to averting climate change.