Tonight, I spent a wonderful evening bottling pickled onions. However the story doesn’t start there. It began yesterday when Amy noticed that some of my home-grown brown onions (that I have been drying for far too long) were beginning to re-shoot. Oh, no I thought. I better do something with them before they all are ruined.

So, after lunch Amy and I began to peel 2 kg of small brown onions. Amy was tasked with peeling as much of the dry skin off with her hands, and I top and tailed the onion and removed the first moist layer. It took us about two hours of teary goodness and our clothes smelled like sulphur when we were finished and the kitchen compost bin was full with brown skins.

I then placed the onions into a large stainless steel bowl, dissolved a quarter of a cup of non-ionised salt into 4 litres of cold water and poured it over the onions to cover. I left them overnight before the next step.

So back to the beginning of my post. After dinner tonight, I washed out 8 jars in hot soapy water and scrubbed clean with a bottle brush. I then rinsed with cold water and put the jars on a baking tray upside down and into the oven still wet at 120C for 15 minutes to sterilize. 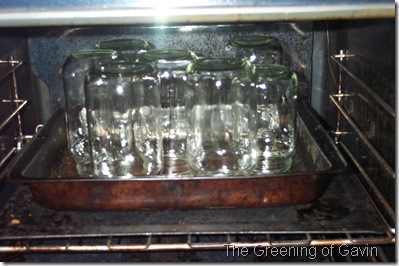 Whilst the jars are in the oven, I prepared the pickling solution. I poured 1 litre of white vinegar into a saucepan, added half a cup of white sugar and 1 tablespoon of pickling spices to the pan. You can pick up pickling spices in the spice rack of most supermarkets. For those who can’t find some, as I couldn’t last year, here is a simple mixture of spices that will suffice.

Once the sugar is dissolved, I brought it to the boil and then simmered for 15 minutes. 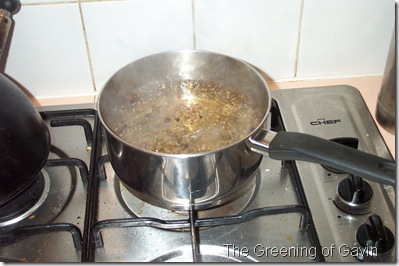 I then strained the liquid, discarded the spices and let it cool down to room temperature. 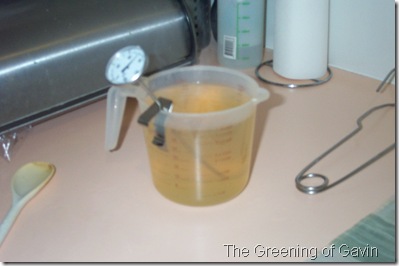 While I was waiting for the liquid to cool, I drained and rinsed the onions in cold water. 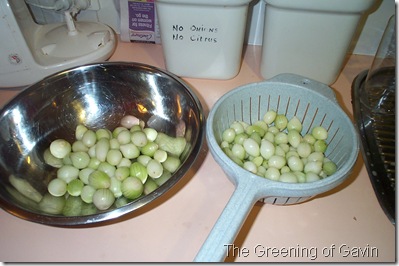 I then removed the sterilised jars from the oven and put them on a clean tea towel to cool down as well. Careful because they are very hot! 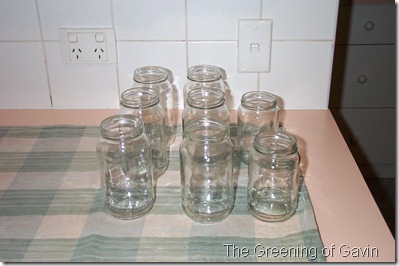 Now, don’t forget to sterilise the lids of the jars. You can’t put them in the oven, because the plastic in the lid melts and doesn’t seal properly, so you have to let them sit in boiling water for the same time you have the jars in the oven. Make sure they are extremely clean before sterilizing them. I use a large fowlers-vacola jar to do this. 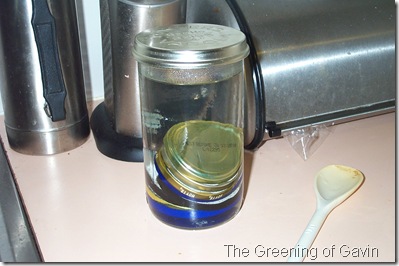 Once the jars are cool to touch, add into each jar 1 dried Birdseye chilli, some peppercorns and a bay leaf. 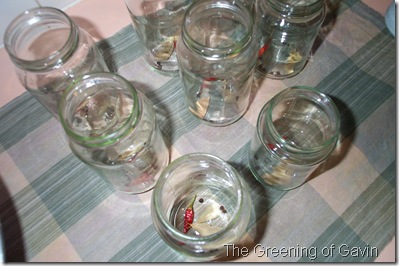 Then I packed the onions into each jar. I found that I only had enough onions for 5 jars so I placed the others aside. I used a bit of artistic flare and arranged them so that you can see the chilli and the bay leaves in the jars once packed. 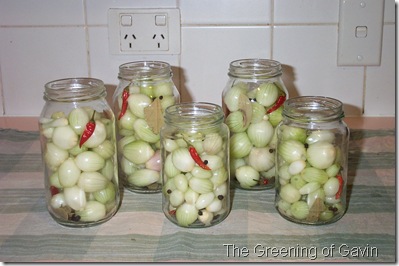 Homemade pickled onions. I grew the Birdseye chillies two years ago, and dried them for storage. I use them in cooking and pickling. Boy are they hot.

Anyway, the Pickled Onions will be ready to eat in three months. Refrigerate before you open them because it adds to the crunch. Great with cold ham, some cheese and crackers. I reckon that this lot will go down just divinely with some Wenslydale I have lying around somewhere and that will be ready about the same time! A match made in heaven.