A week or two ago, I mentioned that I was going to do two book reviews. So, as promised here it is. Note: The recipe for Wensleydale (pitured above) is missing from both of these books. It does not rate a mention. I am so glad that the little recipe book that I received with my kit has it listed. I love this cheese!
Home Cheese Making – Recipes for 75 Homemade Cheeses.
By Ricki Carroll.

The first thing that struck me about this book was that there were no photos in the entire book. All the pictures are illustrations which are quite well done, but not the same as seeing a photo of the cheese the recipe is describing. The other main problem with this book is that all the measurements are in Imperial with no metric equivalent in the recipes. There is not even an Imperial/Metric conversion table as is present in most cookbooks. That struck me as very odd in this modern day and age. With this book being the 3rd edition, you would think that they would have corrected this oversight to appeal to a wider audience. I will have to convert each recipe myself and add the metric measurements, weights and temperatures in pencil. Not an easy job, and one that the reader should not have to do.

Other than these two issues the book is well written for the novice, starting with the history of cheese, what all of the ingredients are, and equipment you might need. Then the author describes the process of cheese making with illustrations which was a good guide to help you understand what you are in for. There is even a section on how to smoke a cheese with a kettle BBQ.

The recipes are divided up into sections which start at Soft Cheeses for the novice, and then Hard, Italian, Whey, Bacteria and Mould-Ripened, Goat’s-Milk Cheeses, all which have ample instructions and are simple to follow. I do like the occasional page dedicated to ‘A Cheese Makers Story’ in which the author has interviewed many prize winning cheese makers throughout the U.S.A.

To finish off this book, the author chose to include 47 pages about serving, enjoying and cooking with cheese. Some of the inclusions are how to cut different cheese, a little bit about what wine to serve it with and then pages and pages of recipes. These recipes cover off how to include your home-made cheese into simple, yet delicious fare. They even mention a few ways to utilise the whey into some of the dishes. I have often wondered what to do with the whey besides making more Ricotta!

Over all, a pretty good book which would certainly whet your appettie and put you onto the right path for creating your own wonderful and tasty cheese. You just won’t know what they are supposed to look like!

Making Artisan Cheese – 50 Fine Cheeses That You Can Make In Your Own Kitchen,
By Tim Smith

This book is truly a delight to read. With lots of colour photos to tantalise the taste buds, my first impression was that this book was going to be a great tool in my cheese making journey. I am a firm believer that if you are just starting out in something, you will more than often need a picture to compare to your finished product. Maybe it is just the way I learn, I am a visual kind of guy.

The book is divided into three main parts, Part 1 – How Tradition Influences Modern Cheese, in which the author give a brief history of cheese making and cheese-making basics. I found these the two chapters in this part very informative, even for an intermediate cheese maker like myself.

Part 2 is titled ‘Making Cheese’ and covers of how to make Basic (Fresh & Soft), Intermediate (Intermediate, Washed-Curd, Cooked, Pasta Filata, and Whey), Advanced Cheese-Making (Mold & Bacteria-Ripened), and Butter & Ghee making. The good feature about each chapter is that it describes the techniques for each level and the equipment needed. I found this a good addition, because if you only want to make basic cheeses you don’t have to wade through a myriad of equipment types to figure out what you need. Each recipe have both Imperial and Metric conversions and the majority have a colour photo of what the final cheese should look like. I really liked both of these features, as it helps add to the experiance and you can make an informed decision about each type of cheese before you take the next step and actually make it. For me, it was the photograph of the Pepper Jack that enticed me to give that recipe a go.

Part 3 – Beyond Cheese Making gives you tips on how to serve your cheese to bring out its full potential. It has a detailed advice on how to best present your cheeseboard, what wines go with which cheese, and something I really liked was which beer paired the best with each type of cheese.

I also liked the ‘Artisan Advice’ that featured in the sidebar of some recipes, and additional tips on how to add herbs to various types of cheese. For instance, the addition of green peppercorns to Pyrenees, or cumin or mustard seed to Gouda. All of these variations actually take the number of cheese recipes to 55, which is a bit of a bonus for the reader.

I would highly recommend this book to novice and advanced cheese maker alike. It is well written, simple to follow, and has more than enough information to get you motivated to run down the store and buy 10 litres of milk and make your first wheel of cheese!

Just to see if there were any variance in each book, I compared the Moneray Jack recipies. Both are identical in ingredients, method until you get the pressing section. Also, one book recommends 1-4 months maturation, the other 1-3 months. Similarly, one book stated the method would yield 2 pounds (900gm) and the other 1 pound. When I made this cheese, it yeilded 878gm, so both were wrong. I suppose it all depends on how much whey remains in the finished cheese.

I hope you have enjoyed these two reviews as much I have in writing them. Both book are informative and well written, but if I saw them both in the same bookstore, I would only purchase Making Artisan Cheese if I was strapped for cash. Unfortunately, the title is missleading and suggest some form of experiance is necessary to use it, and maybe it is the reason why the other book is so popular.

Due to a very slow Internet connection, last night was cheese making night. I started at 6pm, and Kim requested Wensleydale again. So I got stuck into it, but forgot one very simple thing. TIME. I had forgotten that it takes 9 long, but fun hours to make this wonderful cheese. 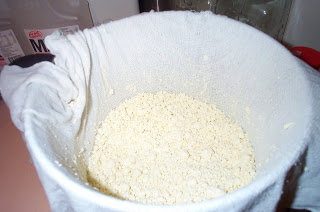 So at 3am this morning, I put the cheese into the press (after adding a layer of home grown sage for flavour) for the last time and dragged my sorry butt into bed! 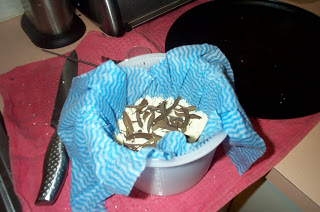 Anyway, my main post today is over at the Simple, Green, Frugal Co-op, and funnily enough it is about “Making Cheese at Home“.

Enjoy, I am going back to bed! I need the strength to dig the remaining holes for the fruit trees.

So what do you think?  I believe that the template looks quite professional, and even better, it was free!

Just a few more things to add into the side bar, like links to some of the tutorials that I have written over the life of the blog, and then it will be complete.