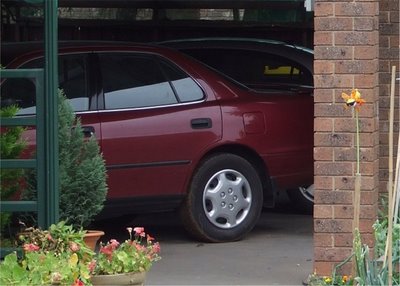 Yesterday, a big weight was lifted from my shoulders. We finally managed to sell our second car! We got rid of it not only for environmental reasons, but for financial ones as well.

Since August last year, I have not been able to drive a manual any further than a few minutes due to my back injury. It seams that using my left leg constantly on the clutch was one of the causes of the relapse I had way back then, that took me out for three weeks. So in true human fashion, I simply avoided driving it. In the end, Kim stopped driving regularly because of MS, so the decision was fairly simple. We figured that by just having the car in the garage we were loosing over $900 a year in registration and insurance costs. That is a big hole in anyone’s pocket. In the end it was quite funny how we found a buyer.

A few weekends ago, we invited our mate David over for a BBQ. It was so hot and messy over the chook-house side of the garden, that I decided to wheel the BBQ over to the carport area that overlooked the veggie patch. It was a much more pleasurable place to socialise, and we wouldn’t get the constant complaining from the chickens! When ever we are outside, they want to come out of their coop as well. Naughty girls.

Anyway, as the second car was in the carport parked next to the well driven Hybrid, we got talking about fuel efficiency, and all things car like. Then David asked me how much I thought the car was worth, and I said that it was around the two grand mark, but would check. He then mentioned that he wanted to pick something up for his son, who is learning to drive, and he didn’t want to buy him a car from a dealer who might sell him a lemon. He knew that we looked after everything we owned, and trusted us, so I suggested that he buy it from us, because we just didn’t need a second car anymore. David jumped at the chance, so I had to quickly buy a new battery as the existing one would not charge, he replaced a broken wing mirror on the passengers side (I didn’t know how), and I paid for the roadworthy certificate. It passed inspection first time, so no extra work had to be done. We agreed on a price of $1950, which was a bargain for him, did the paper work, and he picked up the car yesterday afternoon. He called us after he drove it to Bacchus Marsh, and said it was a great car to drive.

Some of the reasons why it took us so long to sell it were;

This list is not a dig at Kim. It is just that she is my balance when I tend to rush into things. She is the Yin to my Yang, so to speak. She comes up with reasons for why we shouldn’t do something, and I find the reasons why we should, and attempt to convince her. If I can’t, it probably wasn’t worthwhile anyway. I think I have done fairly well so far!

So we will now have an extra $900 a year to play with. It will be used to pay down the home loan, so that I can retire earlier. The cash from the sale will go towards the purchase of the hybrid in October when the lease expires. Now that can only be a good thing.

The only regret I have is, that even though I have now reduced my carbon footprint by disposing of the second car, and have gained financially, someone else is still actually using it, so there is no net reduction in carbon emissions. If anything, there will be more emissions, because I only drove it once or twice a year! Maybe I can convince David to offset the yearly emissions via Green Fleet. Now that would be a coup.